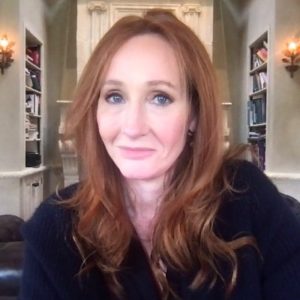 J.K. Rowling  @jk_rowling
.@TwitterSupport These are your guidelines, right? "Violence: You may not threaten violence against an individual… https://t.co/jNLthDXMnj
reply retweet favorite

J.K. Rowling  @jk_rowling
To all sending supportive messages: thank you 💕 Police are involved (were already involved on other threats).
reply retweet favorite

"To get through life without failing, would not be a life worth living"

Harry Potter was the culmination of her own story from poverty and rebellion to fame and fortune. “It matters not what you are born, but what you grow to be.”

The power of our imagination, to drive creativity and innovation, to engage people with empathy, and to inspire their dreams, was the theme of Joanne Rowling’s speech to graduating students at Harvard University in 2008.

The bestselling author, better known as JK Rowling, told how she used her experiences of working as researcher and bilingual secretary for Amnesty International to imagine the stories that became her much loved books.

She conceived the idea for her “Harry Potter” books while on a delayed train from Manchester to London in 1990, and started imagining a story of a young wizard who went to wizard school. Without anything to note down her ideas, she rapidly set out an entire plot in her head, then tried to write it down on arriving home.

The next 7 years were tough, with the death of her mother, birth of her first child, and divorce from her first husband. Having lost her job, because she sat dreaming about her plots, she decide to move to Porto where she briefly married a local TV journalist, before heading to Edinburgh to be with her sister.

In 1995 she sent her manuscript off to every publisher she could fund, but was rejected by all, being told that her story was too long, too elitist, and too complicated. Eventually the CEO’s daughter at Bloomsbury, a children’s imprint, read that story and couldn’t put it down. Her influence on her father resulted in a £4000 advance to Rowling. The only catch was that they felt her pen name needed more style, so she borrowed a middle initial from her grandmother, Kathleen.

“Harry Potter and the Philosopher’s Stone” was published in 1997 to rave reviews. What really changed her life, was when the publishing firm Scholastic came in to buy the American rights to the book for a sensational $105,000. The book sold 80,000 copies in the first year, and hit the top of the New York Times bestseller list. Over the years since it has become the most financially successful novel in history with 400 million readers, and generating $10 billion of sales.

Her own story, a little like Jack Ma’s, was one of rags to riches, as she progressed from living on state benefits to being the world’s first billionaire author. She lost her billionaire status after giving away much of her earnings to charity, but remains one of the wealthiest people in the world.

She wrote her first book “Rabbit” when she was six years old, about a rabbit who lived in her village of Tutshill in Gloucestershire, who got sick and was cared for by a bumble bee called Miss Bee. She was convinced she could be a writer, even though she lacked confidence otherwise.

When Rowling was at school her parents didn’t want her to pursue her dream of being a writer because they worried it wouldn’t pay a mortgage. She ignored them, saying listen to your friends, family, and those who care about you, but remember it is your life. “If you have a gift, talent, dream, then pursue it. There’s no way anybody knows how it will turn out, but if you love it and you put all your energy into it, your chances of success are great.”

Her editor at Bloomsbury, the publisher who took a huge gamble on the unknown author, says that Rowling’s great strength is that she has “a microscopic and macroscopic view of the world” which enabled her to tell such imaginative tales in such engaging detail.

Passing exams, she said to the new Harvard graduates, does not determine your success. Whilst she admitted to having a knack for taking tests and passing exams, she also said that it was her failures that had taken her further. “It is impossible to live without failing at something unless you live so cautiously, you might as well not have lived at all– in which case, you fail by default.” Rather than seeking to avoid failure, we must be willing to accept that it is going to come and be ready to build our lives off it.

“To get through life without failing,” she said, “would not be a life worth living.”

“Imagination is the power that enables us to empathise with humans whose experiences we have never shared” says Rowling, proclaiming that imagination is crucial for life. Without it, we ignore the one truly unique quality that differentiates us from all other species, effectively claiming that we are human.

Perhaps we should also remember the words of the Rowling’s great wizard Dumbledore, headmaster at Hogwarts School of Witchcraft and Wizardry, who said “It matters not what someone is born, but what they grow to be.”