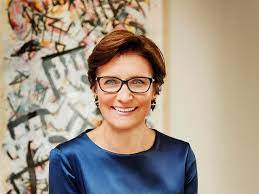 Citi  @citi
To reach #netzero by 2050, we are actively engaging with all our clients to support them in their low-carbon transi… https://t.co/Kb3qABgfg2
reply retweet favorite

The First Lady of Wall Street, the CEO of Citigroup says that leadership is about context, curiosity and courage.

Citigroup's new CEO, the Scottish-born 53 year old, was born a few hundred miles from me, and just two months apart. I don't know about you, but I tend to find that I can relate more to somebody with a timeline similar to my own, even if we end up in vastly different places!

Fraser, the first female CEO of one of the America’s largest banks, has certainly had an interesting journey. Born in St Andrew’s, educated at Cambridge, she started out as an investment analyst with Goldman Sachs in London and Madrid, then found her way to Harvard for an MBA.

In 1994 she joined McKinsey, working in New York then London, working part-time for 5 years as she gave birth to her two children, rising to become a partner.

While there, she co-authored a book Race for the World: Strategies to Build a Great Global Firm. She spent time interviewing leaders from across Asia for the book, and when talking about it afterwards, attracted the attention of Citi who recruited her as Head of Client Strategy in 2004.

During her 16 years at Citi, Fraser has worked her way through roles within the group’s investment and private banks, as well as its mortgage business and its operations.

She has frequently been charged with turning around troubled parts of the bank, the fourth largest in the USA. She worked in its mortgage division following the financial crisis and was put in charge in Latin America after a scandal in its bank in Mexico.

Fraser is poised to take charge as the bank grapples with the economic fallout of the pandemic. In the most recent quarter, Citi’s profits plunged 73% as it set aside more than $7bn to cover potential losses.

She recognises that the last 12 months has been a testing time for Citi, not just commercially, but for every employee.

“We’ve been in the midsts of a health crisis, and if we didn’t put our people’s health and safety first and understand what’s going on in their lives, honestly, I think we would have done a very poor job managing the bank through the crisis,” she says.

On leaders with courage

Fraser says being a good leader means “setting a vision, having the courage to make tough calls, and asking questions.”

At a recent forum she was asked what makes a global leader, saying “I think it’s a combination of setting a context, curiosity and courage …”

Courage is a key topic of my new book: the courage of business leaders to drive and deliver change in today’s complex and uncertain world.

Fraser suggests “I think the courage comes in just being brutally honest about who you are, what are some of the challenges you personally have faced, and being as authentic and real about yourself as possible, so that the people in the middle of the organization relate to you. Because, otherwise, if they’re not relating to you, that whole engine of the organization isn’t really trusting you and going in the direction that you’re trying to take the organization.”

So what lessons she has learnt during her career? She says “One of them is around succeeding off your strengths. For a long time, I would spend most of my time waiting to hear the feedback on what I needed to fix. But if you look at the people who do really well, they’re focused on their strengths and what makes them happy and what their passions are.”

The challenge on CEOs in today’s uncertain world is formidable, not least if you are stepping up to lead a struggling bank, where past glories shape expectations of success. Over the last year, female leaders have shone, particularly in the political world. Jacinda Ardern, Sanna Marin, Tsai Ing-wen, even Kamala Harris.

Their calm and empathetic, yet clear and focused, approaches have proved far more effective than that of many of their male peers.

On the challenge for women

On the challenge for women, Fraser as a mother of two, says she sees it as balance rather than compromise. She said at a recent conference “There is some crazy pressure on women, and on men, to almost be superwoman or superman, and that’s just not realistic. My advice is you can have it all, but don’t expect to have it at exactly the same time.”

She also urges, particularly young people, not to hurry. “Your career is going to be measured in decades, and you’ll probably have many careers in your life, so make sure that you really enjoy each period of your life and make the most of it. Don’t try and achieve everything at the same time and put so much pressure on yourself.”

“I think being a woman has been helpful,” she says about her leadership style, in an interview with the FT. “You are a bit different from other leaders, immediately you look different. I’ve always enjoyed the fact that you can therefore play the game differently, you’ve almost got licence to have more degrees of freedom, and that’s fun.”

Playing the game differently includes her apparent love of office pranks. “As a woman you’ve almost got licence to have more degrees of freedom” she says.

It also meant working part-time when she was a partner at McKinsey with two young sons, and speaking publicly about feeling “exhausted” and “guilty” from her efforts to manage both a career and a family.

When the financial crisis of 2008 hit, her Cuban-born husband Bert Piedra, former head of global banking at Dresdner Kleinwort, decided to leave to his role and spend more time looking after their young boys.

In an interview with CNBC she said “Being a mother of young children and having a career is the toughest thing I have ever had to do. You are exhausted, guilty, and you must learn how to do things differently. It was the making of me because I became much more 80:20, focusing on what was really important. I got good at saying no, and also became more human to the clients who also face many of these issues too.”

Mary Barra, GM’s CEO is said to have advised Fraser to “embrace” the focus on her gender because it aided progress, and then spend the rest of her time focused on her job. “At the end of the day, the most important thing is, can I do a good job in the day job?” she’s reflects.

She’s also not afraid to express herself. In the FT article she remembers her early years working in Madrid encouraged her to reject corporate suits and “drab grey coats” for “dramatic and colourful clothes” favoured by Spanish professional women. “They were themselves. They were powerful, and they were feminine” she says.

She says she was taken aback by how much attention there was when her promotion was unveiled, triggering a flurry of publicity about the shattering of Wall Street’s ultimate glass ceiling. “I hadn’t been thinking of it in those terms,” she says, though she reconciled herself to the spotlight when she realised it could inspire others.