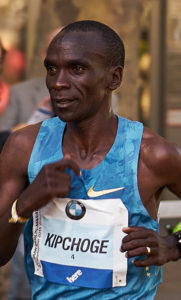 Eliud Kipchoge - EGH🇰🇪  @EliudKipchoge
RT @WorldAthletics:Male Athlete of the Year Finalist ✨ @EliudKipchoge 🇰🇪 Find out who will be crowned winner at the… https://t.co/xyzH9PhoeG
reply retweet favorite

Eliud Kipchoge - EGH🇰🇪  @EliudKipchoge
RT @magicalkenya:"Welcome to my home, a destination that brings you much closer to nature, a place am proud to call home"… https://t.co/2FZCBy4gaN
reply retweet favorite

No human is limited, says the double Olympic marathon champion, and first man to run under 2 hours

The humble Kenyan, the first man to run himself two hours for the marathon says that “no human is limited” and, despite his Olympic gold medals and world records, sets himself much more audacious goals.

“I don’t know where the limits are, but I would like to go there” said Eliud Kipchoge as dawn broke over the Danube river in Vienna.

Two hours later he stood in the middle of the tree lined Hauptallee, having just sprinted to the finish of the Ineos 1:59 Challenge, the first human to break two hours for the marathon. “That was the best moment of my life” he said, standing exhausted but still smiling at the finish line. The clock above him stopped at 1 hour 59 minutes and 40 seconds.

Having followed the Kenyan runner throughout his 20-year career, I watched his iconic record attempt in awe. Around him, some of the world’s greatest athletes, from Olympic 1500m Champion Matt Centrowitz to rising star Jacob Ingebrigtsen and the highly experienced Bernard Lagat, cheered and took selfies with the record breaker, pacemakers to the great man, happy to be part of history.

“Today we went to the Moon and came back to Earth” he said.

Back at home in Kenya, people were crowded round televisions, cheering for their runner. But Kipchoge lives a humble life, with the greatest clarity of purpose.

Every morning, just before 5am, in the small village of Kaptagat in western Kenya. He rolls out of bed, wipes the sleep from his eyes and gets ready to run. By the time the sun rises over the ochre red, dusty roads of the Rift Valley, he is well into his stride. Joined by dozens of ambitious young local runners, he strides past farmers heading for their fields, children waiting for their school buses.

This is just his first 20km, his first run of the day. Every day.

On returning to his training camp, it might be Kipchoge’s turn to make breakfast. Most likely it will be a simple bowl of ugali, a Kenyan staple made each day in a big pan from maize flour and water, plus whatever fruits are in season. Afterwards, he will probably hand-wash his running kit, ready for the afternoon session, and then take a nap. On other days, it might be his turn to head to the local farm for provisions, or to clean the communal toilets.

It is a frugal existence, particularly for a global champion, and self-made millionaire.

Yet for Kipchoge, the Olympic champion and world record holder, it is the only way of life that he has known. His wife and young children live in a much more spacious house in the town of Eldoret 40km away, but during his most important training periods, he prefers the simplicity of his spartan camp.

For 15 years, Kipchoge has been chasing a dream. I remember first seeing him run as a teenager, his bulging eyes fixed on the path ahead, always with a smile on his face. He showed early promise, beating world record holders Kenenisa Bekele and Hicham El Guerrouj to become the 1983 5000m world champion whilst only 18 years old. Over the next decade he won many medals but couldn’t call himself the best. As he reached his 30th birthday, he decided to move up to the marathon. To astonishing effect.

In the marathon, he became unbeatable.

In 2017, his sponsors Nike created a project to see if it would be possible to break 2 hours for the marathon. At the heart of their project was the Olympic champion, Kipchoge. They searched the world for the perfect location, choosing Monza’s Formula 1 motor racing circuit in Italy, the perfect conditions, the perfect pace set automatically by a Tesla car, and the perfect shoe. In the cool dark morning he set off, slipstreaming in behind a squadron of world-class pacemakers.

As his colleagues succumbed to the brutal and relentless pace, one man continued alone against the clock, although missing the historic barrier by 25 seconds. Kipchoge was unphased, delighted but determined to do better. He went back to Kenya and set about improving himself.

Listening to him, dressed in a dark suit and tie, as he addressed the Oxford Union later that year, it struck me that he is perhaps one of the most thoughtful, intelligent athletes you will ever meet. Constantly seeking to challenge himself as a way to progress. Always curious, always listening, wanting to read more and learn from others.

He is even a fan of motivational business books. In particular he regularly rereads Stephen Covey’s The 7 Habits of Highly Effective People saying it taught him the importance of working hard, treating your profession as seriously as you can, and how to live alongside other people. He also likes John Maxwell’s 15 Invaluable Laws of Growth.

Why does he think he has become the best? Because of his mental toughness, he says. “Many of my peers train just as hard as I do. But success is more about having the right attitude”. Maybe unexpectedly for an African marathoner, he likes to quote Aristotle. “In any profession, you should think positively. That’s the driver of your mind. If your mind is really thinking positive, then you are on the right track. ‘Pleasure in what you’re doing puts perfection in your work.’”

Kipchoge is sometimes called the philosopher, sometimes even the Buddha. “No human is limited” says the rubber band that he wears around his wrist. “The mind is what drives a human being,” he says “If you have that belief – that you want to be successful – then you can talk to your mind. My mind is always free. My mind is flexible. I want to show the world that you can go beyond your thoughts, you can break more than you think you can break.”

What keeps him motivated, having achieved Olympic titles and world records? It was actually when he visited Iffley Road, the small Oxford running track where Roger Bannister had broken his 4 minutes for one mile, back in 1954, that Kipchoge became truly fixated by 2 hours, as a challenge and a legacy. He says “The world is full of challenges and we need to challenge ourselves. For me it is to run faster than anybody else in history.”

You might assume that once he found a winning formula, he would keep doing what he does. Not Kipchoge. A surprising supplement to his training schedule before Vienna was the introduction of aerobics and pilates. Seeing the highly tuned athletes working out to Pharrell Williams’ Happy soundtrack seemed almost surreal. “Constantly seek and embrace change” he says. “I know it is not really comfortable to adopt change but change in life of a human being or life of any profession is really important.”

He constantly asks himself what he could have done better, and what can he do in the future. He describes a tree planted near where he lives. “There is a sign next to it saying that the best time to plant a tree is 25 years ago. The second-best time is today.”

At the end of his 2-hour barrier-breaking run in Vienna, Kipchoge talked selflessly about how he hoped his moment would inspire others, not just to also beat the 2 hour barrier, but also for people to believe in the spirit of humanity, to rise above conflict and doubt. “We can make this world a beautiful world, a peaceful world, a running world”.

In 2021, Kipchoge secured his legacy, retaining his Olympic title in Tokyo.