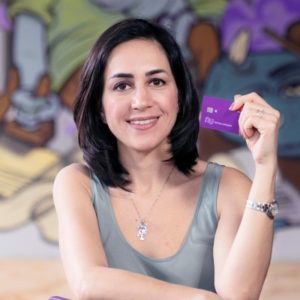 Launching Nubank, Latin America's digital bank for the unbanked, and particularly for women

Cristina Junqueira was working at Itaú Unibanco, one of Brazil’s more traditional banks in 2013, managing their credit card portfolio when she gained the largest bonus of her career. She quit immediately,  realising that she wanted to change people’s lives, not just make money.

Within months, she got together with two friends, David Velez and Edward Wible, to launch Nubank, a Brazilian fintech company that seeks to make banking more accessible to everyone in a company with a huge underclass. Nubank is looking to tools like low-interest, no-fee credit cards, high-interest savings accounts, and an app-based credit system to seeking to serve 45 million unbanked Brazilians, neglected by competitors.

In the early days of start-up, Junqueira found herself doing everything from leasing a small office in Sao Paulo to designing the company’s new website. “If somebody called our customer service line, it would ring on my cellphone,” she says. For Junqueira, it was an even more challenging time, because she was pregnant with her first child.

She is most proud of how Nubank has developed for women. She says that HR policies were very much informed by her early struggles. “Many of the structural choices we’ve made in terms of gender equality and inclusion are reflective of the fact that I have been here from the beginning,” she told Quartz magazine.

“Looking back at my corporate career, I remember how tough it was to work in those predominantly male environments and do things like wear suits just to fit in,” she recalls. “At Nubank I was determined to create a working environment without all the stupid barriers that are very detrimental to women’s career development.”

Nubank’s policies that address gender equality include bringing more women into its technology teams with events like “Yes, She Codes!” a recruitment process specifically targeted at female software developers.  The company also uses blind recruitment to minimise gender biases, and has a mentoring scheme specifically for female leaders, which involves discussion groups aimed at tackling unconscious bias, and a program that allows new mothers to stay connected while they take maternity leave.

All this translates into a more inclusive work culture. Women make up 43% of the digital bank’s 2,000 employees, including 30% of all senior roles, compared to 8% in the sector.

By 2020, Junqueira has a second child, and Nubank is ready to spread its wings further, into new markets such as Mexico and Argentina, and exploring new products like personal loans, investment products, and accounts for small and medium-­size businesses. The credit card was the first to allow Brazilians to apply for and check their balance entirely via mobile, and Nubank is now the world’s largest digital bank outside Asia, and is valued at over $10 billion.