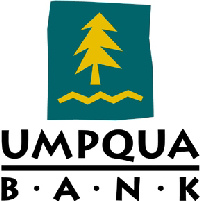 Umpqua Bank  @umpquabank
@OregonElegance Hello! We apologize for the issue with our phone system and are working diligently to resolve the… https://t.co/qQoxzzn49l
reply retweet favorite

Umpqua Bank  @umpquabank
@bitcoin4bernie We would love to hear more about what has happened and to see how we may be of assistance. Please r… https://t.co/t3H0lHwlca
reply retweet favorite
Load more

Fall in love with "the world's greatest bank"

Umpqua reimagined the banking experience around customers, inspired by parallels such as Gap and Starbucks. A passionate focus on people and service has created a digitally-enabled physical experience like no other.

“Fall in love at Umpqua Bank … We want our customers to be really really happy” is not the proposition you’d expect from a serious bank, particularly in tough economic times. But this bank is different. There’s more. “Spread some good (the world always needs more)”. And “Reinvest in yourself” as a rework of taking out a loan. People really do love Umpqua Bank. Is there any other bank in the world where you would consider buying a branded t-shirt or baseball cap?

The River Umpqua weaves through the deep forests and rugged canyons of Oregon State. This is the land of lumberjacks, and in 1953 the South Umpqua State Bank was founded to serve the people of Canyonville. In 40 years it grew to a mighty six branches and assets of $150m, until the logging industry fell into decline, and the CEO died.

Ray Davis applied for the job, a former management consultant who believed he could do something special with the bank. He told the board of directors “If you want things to stay the same, I am not your man. If you want wholesale change that will create shareholder value, I might be”.

In 1994 he set to work, famously taking all his staff to learn from the likes of Gap and Starbucks what it means to deliver a great retail experience in today’s world. He reinvented the branches as stores, or even meeting places, with relaxing sofas and magazines, coffee and cookies. He replaced cashiers behind bars with a concierge desk, long queues with a “relax, sip, surf” and staff that come to you. 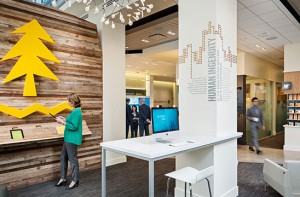 Over the last 16 years, Umpqua has won more admired company and best places to work awards than anyone else, and also managed to stay ahead of competitors, in a time of severe turbulence and an industry generally considered not to work.

Davis believes the challenge is to “find the revolution before it finds you.” The bank now has over 200 stores, stretching from Seattle to San Jose, assets of $11 billion, and a strategy to
build as a lifestyle brand – about people rather than their money.

Umpqua’s 15-year track record of growth has little to do with the products it markets, which are virtually identical to any other bank, although there is a strong focus on ethical finance. It’s much more to do with how they’re marketed. They start with people, human and simple, inspiring and aspirational.

You might notice large colour coded wall displays of the latest financial services – “your green account”, “in your prime”, “the business suite” (themed to the audience, not just standard products promoted on their % APRs). You might be inspired by the successful local restaurant owner, whose story is described this week on the Hero Wall.

Umpqua sounds different … the bank signs indie bands to its Discover Local Music project and invites customers to listen to songs on in-branch kiosks, sells compilation CDs of the best songs, and hosts live gigs on a Friday night.

Umpqua smells different … freshly brewed coffee, Umpqua Blend (which it also sells by the pound), and they end every transaction with a piece of gold-wrapped chocolate served on a silver platter (which is the taste bit!)

Umpqua’s Innovation Lab goes further. A more experimental store on Portland’s Waterfront, it is packed with new technologies, for banking and beyond. It includes the largest Nintendo Wii bowling alley you have ever seen. People, usually office workers in their lunch break, come along wearing their bowling shirts, ready to play.

Umpqua wants to be different, to create a different relationship between the bank, customers and the community; to be interesting when most banks are boring, to be a brand that shares a passion for improving people’s lives.

Davis argues that banking doesn’t just need a paradigm shift, but the whole industry needs to be rethought, reinvented and rebuilt. Whilst most banks feel they have little to say, or compete on, except who has the cheapest interest rates, Umpqua plays a different game. Back in 1994, Umpqua’s market value was $18 million. Today, Davis has handed over to a new CEO who continues the journey, with a value closer to $5 billion.

This is a bank that wears its passion with pride. Having sipped and surfed, sorted out your money, listened to the latest music, and snapped up the new t-shirt, your eyes look up. Above the doors it says “Thanks for being part of the world’s greatest bank”.