Spotify  @spotify
@rascalflatts Thank you for all the great music!
reply retweet favorite

Spotify  @spotify
We love gifts, @SamsungMobile! Especially when we can listen to them on our #GalaxyBuds2Pro https://t.co/yMHicnIsCq
reply retweet favorite
Load more

The freemium business model for music

Spotify grew out of deviant behaviour – imitating the actions of illegal downloaders to find a legal business model which combines free access with the ability to also make money as a business, and for artists and publishers. The brand is contagious, driven by consumer collaboration, and staying topical. 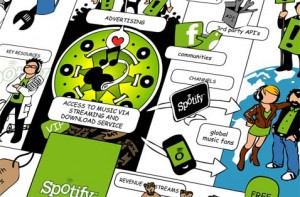 Whilst most people choose Spotify for free access to streamed music, co-founder Daniel Ek if focused on ensuring that the premium services, such as the ability to download and play the music offline for a monthly subscription, significantly exceeds the diversity of royalties it pays to record labels, collecting societies, artists and publishers.

When Ek first invited big music labels, he forgot to mention that they were all invited together, causing panic on arrival at Stockholm airport. Ek apologised for his naivity, whilst telling them he was about to change their world. Sweden was already home to the notorious Pirate Bay file-sharing hub, and Swedes had grown used to not paying for content. He therefore started with his home market, streaming music in a way that was faster, easier, and less risky than piracy.

Spotify is best known for helping to legitimize the “freemium” model: the tiered pricing strategy whereby basic services like music streaming are provided free of charge (with advertising, in Spotify’s case), but premium services like ad-free listening and direct downloads cost users extra.

A six-month free trial starts upon account registration allowing the user to listen to an unlimited amount of music supported by visual and radio-style advertising. After the trial, there is a listening limit of 2.5 hour a week. The “unlimited” subscription removes advertisements and time limits and a “premium” subscription introduces extra features such as faster, higher quality, and offline access to music.  There is also a close partnership with Facebook, encouraging people to access through the site, and then share activity with friends.

Spotify now provides unlimited streaming access to 25 million songs. Around 25% of users pay $10-15 a month for a premium version, a fee that is shared with record companies whose royalties are higher than for many years. Around 70% of music revenues now come from digital streaming, and Spotify is at the forefront of a revolution that is spreading rapidly across the globe.

Despite controversy over artist pay and some musicians (like Taylor Swift and Adele) withholding their music from the service, Spotify continues to grow. Now with more than 75 million total users and 20 million paid subscribers in 2015 (double its paid number in 2014) as well as $3 billion in royalties paid to artists, Spotify has become a veritable music-industry powerhouse. Even longtime licensing withholders, The Beatles, have entered the platform’s massive library.

Much of Spotify’s success is due to increasingly sophisticated data collection, which allows it to keep releasing new products that captivate its users around a particular mood or moment in time rather than offering the same tired genres. Users can constantly change up and enhance their listening experience with data-powered features like a Discovery tool for new music that rivals Pandora’s capabilities, a Running feature that curates music timed to the beat of your workout, and Taste Rewind which tells you what you would have listened to in the past by analyzing what you listen to now.

Spotify, now based in London, has started using the fruits of its labor to expand, teaming up with Songkick to provide concert recommendations based on listening behavior and location. And now that Spotify has proved that people will pay for convenient, one-stop access to their tunes, all in the face of Apple’s marketing blitz for Apple Music, the next big move will be a transition into premium-only content.