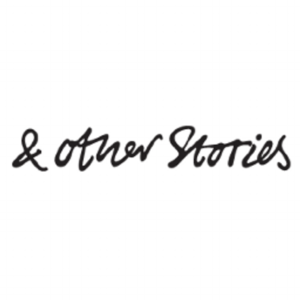 Latest tweets from & Other Stories

Where women curate their own personal style

& Other Stories headquarters in Stockholm are surprisingly low-key. Located on a quiet street in a residential part of the city, it's a far cry from the vision of ultra-hip Swedish cool that H&M and its other brands seek to project on the world. Unlike Zara's portfolio of fashion brands that target different ages and attitudes, H&M's portfolio is more a collection of different lifestyle concepts. More interesting, and distinctive.

& Other Stories was an instant hit when it was launched by H&M in 2013. It started out with seven stores – in Barcelona, Berlin, Copenhagen, London, Milan, Paris and Stockholm – and now has over 50 stores  in 13 countries.

The brand concept emerged from an internal H&M plan to launch a premium beauty brand. Sara Hildén-Bengtsson, together with colleagues Samuel Fernström, Karin Nordström and Helena Carlberg, pitched an alternative idea to create a beauty, fashion and accessories brand with a creative feel – an atelier that would allow women to curate their own personal style. Prices would sit somewhere between H&M and Cos’s and collections include staple items such as striped t-shirts and silk blouses alongside patterned dresses and trainers from Nike and Adidas.

The business was hesitant at first. “They said, ‘It looks exactly the same as H&M – you say you’re going to do beauty and shoes and ready to wear and accessories’ and we said ‘we know, but it will be founded in 2013 so believe us, it’s going to be different’. They said, ‘OK, let’s do it’ and that’s how it all got started,” she continues.

“Then we were only five people working with the project and I must say, I think the H&M group was really brave to start new brands and do new developments like this. They dare to do new things. Of course, they have the muscles as well, but I think they’re very exciting in that way.”

Hildén-Bengtsson studied graphic design and advertising at Sweden’s Forsbergs Skola and communications at the Royal College of Art. She joined the H&M group’s special projects team in 2007 after working at Neville Brody Associates and on creative projects for Kenzo and Liberty.

As creative director of the new concept, she worked with a small team to establish the brand’s tone of voice and its visual identity. From the outset, it has always felt more like a boutique label than a global brand owned by one of the world’s biggest retailers. Indeed its creative team operates independently from the H&M group, there is no clue of parentage in the store, and everything from photoshoots to clothing and creative campaigns are conceived in-house. The team occasionally collaborates with external agencies (it worked with Made Thought to create packaging) but oversees all of the brand’s creative output.

“We all talked about the fact that we are happiest when we are in the studio working and that is where everything gets done – from the collections to the packaging for the beauty, all the art direction, photo shoots, everything is happening with the studio and everything is fitting together,” says Hildén-Bengtsson.

“It’s almost like going back to the Royal College in a way with all of the different fields working together … there’s a lot of different disciplines and they all need to work together to make the brand as coherent as possible, and I think that’s the beauty of it. That’s kind of the heart of the whole story [and] the idea of the atelier needed to be reflected within the store. If you go into & Other Stories, it should feel almost like a pop-up shop. It has that creative vibe to it, you have that feeling of, ‘I’ve just been to a creative space’…. The online shop obviously needed to reflect that, so it’s almost like a digital mood board that you go to for inspiration.”

& Other Stories launches a handful of new collections each season. Each collection or ‘story’ is inspired by a different city and showcased in films and photo stories on its website and social channels. The brand regularly launches ‘co-labs’ with creatives and retailers – it has created capsule collections with Rodarte and singer Lykke Li as well as shoe brand Toms and Central Saint Martins graduate Sadie Williams. The choice of collaborators is diverse and often surprising.

“We did a collaboration with Sadie Williams when she was almost straight out of  Central Saint Martins – we just thought her degree show was fantastic – so it has been collaborations at all kinds of levels,” says Hildén-Bengtsson.

The brand also aims to continually surprise audiences with its advertising and celebrate individuals with their own distinct style. The lack of diversity remains a major issue in fashion but & Other Stories has been more inclusive than most when it comes to campaigns: for AW15 it launched a campaign starring trans models Hari Nef and Valentijn de Hingh and shot by trans photographer Amos Mac. The following year, it launched a Valentine’s Day campaign featuring a same sex couple and in 2014, teamed up with nonagenarian style icon Iris Apfel.

The brand’s films range from stop-motion shorts to a humorous tale directed by Wendy McColm and starring French model Jeanne Damas. The film pokes fun at the way women are often represented in fashion films with Damas presented as a self-indulgent bohemian. It also teamed up with Lena Dunham to create a short promoting a co-lab by designer Rachel Antonoff.

When it comes to the brand’s advertising, Hildén-Bengtsson says there was no distinct formula – “It was a mix of things and hoping that people felt surprised,” she explains. “There wasn’t a direct style that was & Other Stories – there was a red thread through everything but we shot with different cameras, we had different types of photographers, we did small films and lots of different collaborations. We had hits and misses but it was a lot to do with creativity and trying to have a good time and hoping that the customer would feel that there was an energy there.”

& Other Stories’ success is based not just on its clothes and unexpected collaborations but the attention to detail that runs through every aspect of the customer experience – from packaging to store design. In store, a pop-up feel is created with concrete floors, exposed lighting and clothes displayed on moveable racks and shelving units. “We have got good feedback from people saying that they felt when they went into the store, you could see there was a lot of love put into everything that was done,” says Hildén-Bengtsson.

The brand’s stripped back website features some lovely imagery and its Instagram feed offers a behind-the-scenes look at the atelier as well as close-ups of store displays and product shots. It also regrams customers’ posts, creating a feed with a personal, intimate feel. It produces bespoke content for different platforms but the same aesthetic and tone of voice runs throughout all of & Other Stories’ communications.

“I think customers don’t always remember or care about if they’ve seen something on Instagram or on Facebook or in a store … they just see that as the brand voice coming out and I just think it’s so important for everything to be as coherent as possible,” says Hildén-Bengtsson.

“That doesn’t mean that everything has to be exactly the same, but it should feel like it’s the same brand and the same voice coming through, so you feel that you trust the brand and you feel love for it or you feel excited about it – that you have some kind of connection to that brand. I hope that’s what we were able to create with & Other Stories.”

After six years at & Other Stories, Hildén-Bengtsson has left the brand to set up a new creative studio, Open. “I love the startup phase. I’m that kind of person that loves creating concepts and new brands,” she says. “I stayed for almost seven years. That’s a long time for someone who has this type of mindset but that’s because I’m totally in love with the brand and all the fantastic people that work with it so for me, I needed to be challenged again, and scared and thrilled and so on.”

As Hildén-Bengtsson notes, the retail experience has changed dramatically in the past few years. Brands are being more creative online – whether through their use of social media or creating more dynamic websites – but now face the challenge of enticing customers into physical stores when it’s often quicker and easier to shop online. The shops that are thriving are those who can offer something extra – whether it’s in-store stylists and beauty bars or florists and cafes. “I think we’re going to see a boom in the whole experience design or communication [design] in stores because they need to find their reason for being,” she says.

Online or off, the key to engaging with consumers is of course, devising compelling experiences that feel genuine and distinctive. “I think you have to be really good at storytelling – telling your story, why you exist on the market, what you are selling and why customers should choose to love this brand instead of another,” says Hildén-Bengtsson.

“There is so much information and so much going on now that people are very clever and they will only connect with things that are real so I think that’s the lesson now – to really tell all the great things that you do with the brand and why you’re doing them and how you do it and be clear in your communications.”