Airbus, Bharti, Coca-Cola and Virgin are just some of the investors who have together pledged over $500m to create the world's first global satellite-based internet service. OneWeb is building a network of 700 satellites to take broadband access to every corner of our planet - including cars, aircraft, and homes in the most remote locations.

In 2018 we will begin launching a constellation of satellites to provide affordable high-speed Internet access for the world’s unconnected. We recognize this isn’t easy, but it is both achievable and too important not to do.

Our vision is shared and supported by the United Nations International Telecommunications Union (ITU). The ITU recognized the potential disparity in connectivity access and prioritized specific global spectrum to connect the world. This is the only spectrum of its kind and OneWeb’s license to utilize this capacity is a globally unique position.

Our role is as a technology and infrastructure provider. Mobile carriers, ISP’s and other partners globally will sell and manage the services on the ground. We see this as the most cost effective way, with the help of our partners, to accomplish our communal goals. 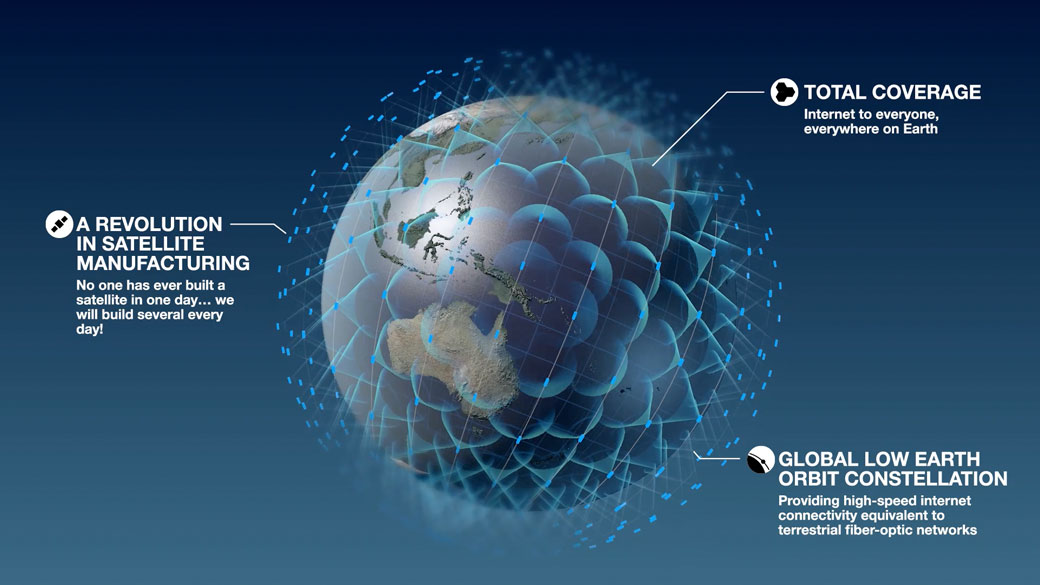 The race to build global, high-speed, satellite internet is on.

In one corner is SpaceX, which filed with the FCC earlier this month for permission to test satellites for low-latency internet broadcast. SpaceX received a billion dollar investment from Google and Fidelity earlier this year, part of which is widely believed to be to support this initiative.

In the other is OneWeb, initially backed by Virgin Group and Qualcomm, which has today announced a $500 million series A round that attracted investors including Airbus Group, Bharti Enterprises, Hughes Network Systems, Intelsat, The Coca-Cola Company, and Totalplay.

The funding, according to OneWeb, will be geared toward further developing its satellite technology, as well as stations on the ground for mobile providers to further distribute internet access via LTE, WiFi, etc. The company aims to have its internet services up and running by 2019. The ground stations will be built by Hughes Network, which already provides high-speed satellite internet to certain markets from satellites in geostationary orbit.

“The dream of fully bridging the digital divide is on track to be a reality in 2019,” OneWeb founder Greg Wyler, said in a statement. “Together with our committed and visionary founding shareholders we have the key elements in place: regulatory, technology, launches, satellites, as well as commercial operators in over 50 countries and territories.”

OneWeb is an even more ambitious venture than O3b, however, with a goal of being able to provide internet access globally rather than targeting specific emerging markets. To that end, the company has announced an alliance with communications satellite company Intelsat.

“By complementing our GEO services with LEO services, we will be able to provide connectivity over the Earth’s poles and in urban canyons, coverage that is important for certain mobility applications, including automotive services,” IntelSat CEO Stephen Spengler said in a statement. “In collaborating on Ku-band access hardware, we will develop technologies with additional scale that will simplify access, reduce costs and open new addressable markets.”

As part of the deal, IntelSat has taken a $25 million stake in OneWeb.

In addition to the satellite and funding deals, OneWeb has also announced today that it has signed deals to launch its satellites with two companies, Arianespace and Virgin Galactic.

With Arianespace, the world’s largest commercial space launch company, OneWeb has signed up for 21 Soyuz rocket launches, beginning in 2017 and leading to full satellite deployment by 2019. OneWeb has also reserved contract options for five additional Soyuz launches and three Ariane 6 launches after 2021 for replenishing its satellite network.

In addition to ArianeSpace, Virgin Galactic will be conducting 39 launches of OneWeb satellites via its satellite launcher system LauncherOne. The contract also reserves an option for 100 more satellite launches from Virgin. No date has yet been provided for these launches. This is likely because although Virgin Galactic has been making a lot of strides to get its satellite business up and running, the first LauncherOne hasn’t made it to space yet.

“Our vision is to make the Internet affordable for everyone, connecting remote areas to rest of the world and helping to raise living standards and prosperity in some of the poorest regions today,” Sir Richard Branson said in a statement. “We believe that OneWeb, together with Virgin Galactic’s LauncherOne satellite launch system, has the capability to make this a reality.”