Netflix UK & Ireland  @netflixuk
If you watch Man Vs Bee backwards, it’s a very sweet show about a man who goes around tidying up a messy house. A b… https://t.co/DycXJd8cfE
reply retweet favorite
Load more

Changing what and when we watch

Netflix grew out of consumer frustration with the stupid rules of an old model. This provoked one guy into creating a better solution, which has continued to evolve in format and business model as new technologies emerge, and competitors catch up. The next horizon of data-driven content creation is perhaps most intriguing. 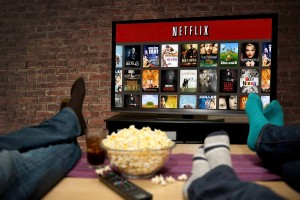 Netflix is transforming the way we find movies, when and how we watch them. Founded in 1997 as a DVD by mail service, it soon migrated online to offer more than 100,000 movies streamed to your screen for a monthly subscription. Reed Hastings, and colleague Marc Randolph, set up the business after making $700 million selling their Pure Software business, and then being fined $40 for the overdue return of his rented copy of Apollo 13. Outraged he vowed to find a better model.

Within two years of launch it had moved from charging per DVD, to a flat subscription. Within a decade it had 25 million subscribers, had delivered a billion DVDs although most users now preferred online streaming. Netflix found the customer base actually grew faster during the economic downturn that at other times – partly as broadband penetration grew, but mainly because a Netflix subscription had become a household essential.

Whilst the business might appear to be about distribution, the data on subscribers and their viewing behaviours became most significant. Initially this provided a highly accurate way of targeting advertising, but even more profitably in creating original content that specifically matched the preferences of target audiences. Big data started to replace, or enhance, creativity. Netflex invested $100,000 in “House of Cards” based entirely on data algorithms, seeking to create the perfect TV series to match its target audience and advertisers.