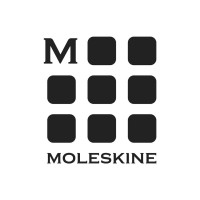 Moleskine  @moleskine
Just like your best friend, the @Moleskine Textile backpack will always be there when you need it. The soft velvet… https://t.co/7KGJ915BY7
reply retweet favorite

Moleskine  @moleskine
Too lovely for a backpack, too smart for a purse. The @Moleskine Textile backpack is a delightfully fluid gift for… https://t.co/qQcftrbzXS
reply retweet favorite

Moleskine  @moleskine
As playful as it is practical, the @Moleskine Textile backpack is a bag designed to keep you organized wherever the… https://t.co/cxVN6KCxV7
reply retweet favorite

Moleskine  @moleskine
@stevieG9198 Hi @stevieG9198! Please contact us via a direct message on our @Moleskine page on Twitter, we will be… https://t.co/0OGFNNmvoj
reply retweet favorite
Load more

The iconic notebook reinvented in a digital world

Moleskine began life as Modo & Modo, a small Milanese publisher that, in 1997, brought the original notebook back to life and established the Moleskine® trademark. Moleskine Srl went on to acquire the worldwide trademark rights for the brand in January 2007 and was listed on the Italian Stock Exchange in 2013. The brand was acquired and delisted by D’Ieteren at the end of 2016.

The Moleskine notebook is the heir and successor to the legendary notebook used by artists and thinkers over the past two centuries: among them Vincent Van Gogh, Pablo Picasso, Ernest Hemingway and Bruce Chatwin.

“Every Moleskine notebook is a book yet to be written and a story waiting to be told” says Maria Sebregondi, Moleskine co-founder and president of Moleskine Foundation

Today Moleskine offers an eco-system of objects which inspires imaginations and fuels creative practice, versatile tools for both everyday and extraordinary journeys: notebooks, journals, bags, luggage, apps, writing instruments and reading accessories which complement each other in form and function, becoming an integral part of our personalities.

Moleskine describes itself as “a platform which celebrates talent, champions originality and cherishes long-term thinking”.

With headquarters in Milan and offices in Cologne, New York, Hong Kong, Shanghai and Tokyo, Moleskine company counts around 400 employees and a vast network of partners and consultants. A dedicated Global Custom Edition team works to help the world’s leading cultural institutions, companies and agencies tell their stories through customized Moleskine objects.

The company began life as Modo & Modo, a small Milanese publisher that, in 1997, brought the original notebook back to life and established the Moleskine® trademark. Moleskine Srl was listed on the Italian Stock Exchange in 2013. The brand was acquired and delisted by D’Ieteren at the end of 2016. Today, the Moleskine company has around 400 employees and a vast network of partners.

In his book The Songlines, Chatwin tells the story of the little black notebook: in 1986, the manufacturer, a small family-owned company in the French city of Tours, went out of business. “Le vrai moleskine n’est plus” are the lapidary words he puts into the mouth of the owner of the stationery shop in Rue de l’Ancienne Comédie where he usually purchased his notebooks. Chatwin set about buying up all the notebooks that he could find before his departure for Australia, but they were still not enough.

In 1997, the company known today as Moleskine brought the legendary notebook back to life.

“At Moleskine we believe in the timeless power of handwriting as an essential expression of human civilization, a powerful act to unleash human genius and foster the development and sharing of literacy and knowledge. In a fast-paced technological era, we proudly celebrate the artistry of the human touch; the enduring pleasure of putting pen to paper to unleash your unique voice. We celebrate the solemn, thoughtful and meditative gesture of the pen gliding across a blank page; the romance of crafting a personal story to record a lifelong memory and leave a distinguishing mark in all its unique beauty. Handwriting is both universal and deeply personal. It’s a thoughtful way to express your true self and connect to others in a very intimate yet universally accessible way.”

“Put pen to paper, and unleash your unique voice.”

Moleskine says “we believe in the infinite potential for continuity and connection between analog and digital tools. This bridging of page and screen is essential to fulfil our users’ needs.”

Moleskine Smart is an ecosystem of smart tools and services designed to simplify the creative and productive process, allowing an idea to evolve naturally on paper before being edited and shared digitally. The Moleskine Flow App won the 2019 Apple Design Award for Excellence in Design and Innovation.

Here’s how The Independent reviewed the system:

“Nowadays, we all carry around a number of devices that allow us to store, access and edit documents remotely. Working on the go has never been easier. But what if we told you that a new revolution was on its way?

Digital note-taking allows any handwritten notes to be stored electronically. This then gives users the ability to recall, edit and organise notes directly on their device without the need to carry around a number of heavy pads, books or handfuls of paper.

The technology typically comes in two forms. Firstly, there are the direct-to-device notes, whereby apps such as Good Notes allow you to write directly onto the screen using an Apple Pencil or similar. Alternatively, there are products that come with a traditional notepad and pen that have Bluetooth connectivity to track your pen movements onto an app. This is where the Moleskine smart writing set comes in.

It has been designed for people who want to keep an element of the traditional, using real paper, but who also need the flexibility of accessing their notes on the go, or exporting them and emailing them as PDF documents. There’s also a sense that electronic notes can be better organised to fit your own individual needs and workflows.

But could digital note-taking really make our day simpler? Could transferring notes directly from page to screen really be a game changer? We found out.”

Straight out of the box, the Moleskine smart writing set feels well-designed. It’s well-packaged, and comes in a smart black box adorned with lovely minimalist cues, like the embossed Moleskine logo on the front.

Once inside, it’s all standard Moleskine premium feel, with the main attraction being the classic elastic-close, rounded black book upon which the brand has built its rather enviable reputation. But it’s the black ballpoint pen which we need to pay close attention to here.

Contained within a separate box, at first it feels somewhat chunky upon inspection, but a close look tell us it’s actually rather well-designed and is ergonomically well thought out. Holding it in a usual way feels a little alien at first, but it didn’t put us off and we got used to it very quickly.

For a system advertising itself as a fuss-free way to increase productivity and streamline your work processes, you’d expect an easy set-up, and luckily the Moleskine smart writing set didn’t disappoint on this front.

A word of caution – charge the pen before you use it, as we found a few connectivity issues at first when the battery was low. With the pen charged, though, and the Moleskine notes app downloaded from the app store or the Google play store, you’re pretty much ready to go and start writing.

In the apps main menu you’ll find your notebooks, a notebox (which contains your locked and important documents), and a trash bin where you can retrieve old pages if needed.

You don’t need to sign up to an account as the settings allow you to connect your Google OneDrive accounts, and with the auto-upload feature enabled, it’s even easier to access your written pages on the go. That being said, if you set up a Moleskine smart account, you have access to your notes in the cloud, easy backups and a new subscription service that isn’t released yet but promises to open up more possibilities and features.

The process of actually using the system doesn’t need a whole lot of explaining – you can just use it as a normal pen and notepad, and the pen will automatically track your movements and make a digital copy that will be stored on the app. There are, however, a few steps you have to go through before you start writing that can make the whole process a little confusing and counter-intuitive…

We found that the app had to be open and the pen manually connected before it tracked any writing. And we also came across a few connectivity issues when trying to write and had to turn everything on again after the app was closed down and the pen turned off.

These were minor niggles that we overcame very easily after a little investigation. But on the basis that you can still use the pen and notepad “traditionally”, without the Bluetooth on and the app connected, we wonder whether some people might end up not bothering connecting it at all.

This would, however, be a shame, because with everything working well the Moleskine writing set does a very good job of making on-screen copies. For example, if you’ve often found it hard to use the likes of the Apple Pencil on an iPad, then this might be the solution for you. Your own handwriting is rendered in a very crisp way and the words are even transcribed into digital text for copying and pasting should you wish. We also found that the app does a pretty good job of interpreting even the scruffiest of notes, so there’s no need to worry if your handwriting isn’t the neatest.

Pages are organised by last used, or by page number, and the app instinctively knows which page you’re writing on. So, everything inside the app is minimal, neat and easy to follow.

If there comes a time when you forget to turn the pen or Bluetooth on, you shouldn’t need to worry too much as it contains a small amount of memory to transfer your notes when you’ve switched it back on. It’s a really neat little feature which we found came in very handy while we were getting used to it.

“We really enjoyed using the Moleskine smart writing set, and, in fact, think it’s probably the best traditional/digital combination system on the market at the moment. It’s a nice package and stays true to the brand’s values of premium quality, with a few digital-specific niceties like the email and cloud auto-upload features that make it stand out from the crowd.

It isn’t totally without its flaws, and because the app is relatively new we expect there to be patches, updates and bug fixes in the pipeline making the device easier to use, quicker to connect and less prone to glitches. The only other criticism we had was the price – it is a lot of money, with additional smart writing notepads being around £20 each once you’ve filled up the original.”