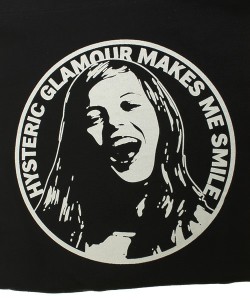 The entire design concept of Hysteric Glamour is based on the 1960’s to 1970’s American cultures that influenced Kitamura during his childhood. Designer Kitamura works hard to design each piece using bright vivid colors while remaining pleasing to the eye. The inspiration of Hysteric Glamour clothing comes from intriguing aspects of American culture such as music, comics, pornography, automobiles, mass media such as package designs and neon lights.

It is a clothing line for ladies from the high teens to the mid-twenties. It is mainly known for its t-shirts and jeans. The designs are colorful and mixing the 70’s style with a taste of industrial mass media pop recognized in American comics. The brand covers a wide variety of clothing including t-shirts, jeans, cardigans, frilly tank tops, mini dresses, and many accessories.

Hysteric Glamour was launched in 1984 when Kitamura decided to bring his designs to the world. Serving as chief designer, company manager, and store developer, Kitamura has spent his entire career building the label Hysteric Glamour into the popular tag it is known as today. Since the beginning there have been over 51 stores opened in Japan alone.

The brand began launched outside of Japan in 1991 by opening a store in United Kingdom, and became a favourite of alternative rockstars like Mark Bolan. Stores have been popping up all around the world since. While the company is expanding quickly there are currently no stores located in the United States. This leaves many Americans desperate to find authentic Hysteric Glamour clothing in-turn driving up the prices.

In 2006 Hysteric Glamour launched a line of limited production clothing inspired by, and based on the designs of, American pop artist Andy Warhol. Some of the most popular items sold out on the first day. Warhol branded Hysteric items included jackets, jeans, t-shirts, and accessories.