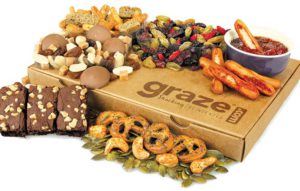 graze.com UK  @grazedotcom
@lon3Rager Hi there, We're glad you agree that what was excellent, has been improved! We can appreciate it seems li… https://t.co/xu0fIkrL9V
reply retweet favorite

graze.com UK  @grazedotcom
@KatieSh84806067 Hi Katie, We're very sorry to hear that you discovered this in your snack. Please get in touch at… https://t.co/8j17OKxuaO
reply retweet favorite

graze.com UK  @grazedotcom
@JimmyMorrisUK We have recently reworked some of our recipes to reduce the amount of salt, fat and sugar, during th… https://t.co/Ag4lwPdylS
reply retweet favorite
Load more

Graze is a London-based snack company which offers over 200 snack combinations - including nuts, small puddings, and porridge - through snack subscription boxes, an online shop and retailers. It expanded operations to include the United States in 2013, launching snacks into US retailers in 2016. In 2012, The Carlyle Group bought a majority share holding in the business.

Anthony Fletcher was at work one day in 2009 when he tried some nuts, seeds and dried fruit that had been delivered in the post by a new company called Graze. Graze had been set up a year earlier by seven friends (including Graham Bosher, founder of LoveFilm) as an internet-based business that posted healthy snacks in cardboard boxes small enough to fit through people’s letter boxes.

Then aged 27 and working for a drinks company, Anthony says he was “blown away by the idea of it”. So much so that he immediately found out where Graze was based, drove across London to knock on its door and asked for a job. The team at Graze were impressed enough by Anthony’s get-up-and-go and enthusiasm to give him the job of head of marketing.

Fast forward to today and Anthony is CEO of the business that now enjoys annual sales of more than £70m and that under his leadership has successfully expanded from the UK to the US. With a masters degree in chemistry from Oxford University, and a year spent doing pharmaceutical research at Princeton University in the US, Anthony might not immediately seem a perfect fit for leading a snack food business.

However, while Graze’s food is all natural, the company is renowned for its very scientific and technological approach to how it operates.

Now selling more than 400 different snacks, ranging from flapjacks to beef jerky, and dried beetroot to carrot crisps, it constantly analyses the 15,000 customer ratings it says it receives every hour to tweak and develop new products and product combinations. This has led to the creation of such best sellers as “Veggie Protein Power”, a combination of soybeans and chickpeas. Meanwhile unpopular products such as fennel and caraway seeds can be quickly dropped.

Not that Anthony would claim it was always plain sailing, especially in Graze’s early years. “Lots of founders and CEOs tell beautiful stories about having the right vision from the start, but it wasn’t the case at Graze,” he says. “We had to iterate, we tried and we failed – we had to pivot a great deal. People were excited, but not about the product.”

One thing that Graze initially got wrong was to try to sell slices of fresh fruit, but Anthony says it had to be axed from the range because even though they “tried to ship it as fast as possible” it wasn’t arriving with the customer in good enough condition.

With its own production facility, Anthony says the business can put new products on sale within 24 hours. He says: “We have a vast amount of data that we can use to understand the product and the customer. “It lets you be reckless and try different ideas. That permeates the business.” It was after he had been with the business for three years that Anthony became chief executive, when he led a management buyout in 2012.

The move, which was backed by US private equity group Carlyle taking a majority stake in the business, saw three of the seven co-founders end their day-to-day involvement in the business but remain as shareholders.

After selling direct to customers via a subscription service for its first six years, Anthony overhauled its business mode in 2014. While subscriptions would continue, customers could also start to make one-off purchases. An even bigger move that year was a successful leap into wholesale, with Graze products becoming available at UK retailers like Sainsbury’s, Boots, WH Smith and Tesco.

Anthony admits that the timing of the move into the bricks-and-mortar world was fortuitous, as supermarkets and other retailers were being put under pressure to remove confectionary products from the “impulse purchase” racks near the tills. “We were very lucky, there was some serendipity involved,” he says.  “The UK government was putting a big drive to remove sugar products from the till, and retailers faced a dilemma of knowing customers were tempted into purchases, but they used to make so much money off it.”

The next big move at Graze was its expansion into the US in 2015. Anthony says Graze knew it had to move fast to get to the market before rivals, so rather than try its luck in one state, it decided to launch in all 50 at the same time. The hope was that its focus on data and its quick response to customer feedback meant it would be able to produce a range of snack products that appealed to US tastes, even if at first some items were not successful.

Thankfully for Graze this approached worked, and while it initially started selling its standard UK range in the US, Anthony says it quickly dropped items that US customers “hated”, such as mango chutney, the UK curry condiment staple. More US-specific products were then quickly introduced, such as “Creamy Range Kern Pops”, which is popcorn with a “creamy, zesty kick”, and chocolate pecan pie.

Within three months of its US launch, Anthony says Graze had gained 100,000 customers – a number that has continued to grow.

Toby Pickard, senior retail analyst at grocery research firm IGD, says there are three main reasons why Graze has become one of the UK’s leading snack brands. “Convenience, its ability to personalise healthy snack deliveries to suit customers’ personal preferences, as well as its ability to tailor new products for local markets,” he says.

On a day-to-day basis Anthony admits he finds it hard to balance being a boss of a company with 500 employees, with being a parent. “It’s a challenge,” says the father-of-two. “One of the most challenging aspects is international travel. It’s demanding, I don’t think there are any easy answers, you just have to manage.” Part of that process is changing his management skills, and taking a step back. He says: “In the early days I was really involved in the decisions, but as the business has grown, I have become focused on not solving all the problems, but still being curious about the organisation and making it better.”