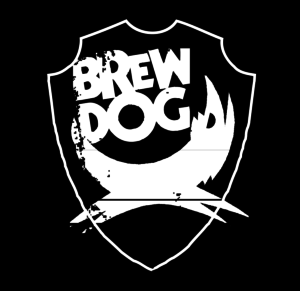 BrewDog  @brewdog
@RaySimps83 Please drop us a DM with your order number and we'll take a look for you! Cheers, BrewDog x
reply retweet favorite

BrewDog  @brewdog
@ShaunWi92882833 Oh no! Please drop us a DM with your order number and we'll take a look for you. Cheers, BrewDog x
reply retweet favorite

Beer for punks, irreverent and brilliant

James Watt and Martin Dickie were bored of the industrially brewed lagers and stuffy ales that dominated the UK beer market. Sat in their local Scottish pub, they decided the best option was to brew our own. In April 2007 BrewDog was born.

Both only 24 at the time, they leased a building in Fraserburgh, got some scary bank loans, spent all their money on stainless steel and started making some hardcore craft beers. They brewed tiny batches, filled bottles by hand and sold their beers at local markets and out of the back of our beat up old van.

Since then, the company has grown exponentially and is now regarding as a leading brewer in the craft beer revolution.

Watt himself is known for explosive, bombastic proclamations in the press: His press releases include “F**k the rules” announcing the launch of his new business book and an update on BrewDog’s crowdfunding campaign that quotes him as saying: “We’ve not just broken a record, we’ve smashed through it with a monster truck”.

But in person, when we meet to discuss his new entrepreneurial advice book “Business for Punks,” Watt is softly spoken, cheery, and pretty harmless. The closest he gets to swearing is saying “balls.”

“I just wanted to outline our off-the-wall, slightly anarchic approach to business so other people could see what we’ve done and realise that you don’t have to do what you’re supposed to do, you don’t have to follow the status quo, and you can do things on your own terms,” he says, explaining his motivation for writing the book.

“Before I set up the business I was captain of a fishing boat. I’d never done a business before, I’d never been involved in business. We didn’t know how things were meant to be done so we went ahead and did things on our own terms, in our own way, and almost inadvertently created a whole new approach to business along the way.”

BrewDog was one of the first breweries in Britain to pioneer a new wave of hoppy, American-style “craft” beers and its Punk IPA is one of the most popular and recognisable brands of British craft beer.

Watt and co-founder Martin Dickie have become two of Britain’s most successful entrepreneurs in recent years, growing the business to revenues of £32 million ($48.9 million) last year, building a network of bars across the UK, and exporting its beer worldwide.

Watt likes to talk up his “anarchic” approach and chapters of his book include “Finance for visionary renegades,” “Marketing for postmodern dystopian puppets,” and “Sales for postmodern apocalyptic punks.”

But look past the flowery language and the advice in the book is pretty level-headed stuff — keep an eye on the bottom line, know your customers, and make sure staff are happy.

“The startup phase, finance, the bit about staff, company culture, finding time — all these things can apply to almost anyone in any business,” he says.

While Watt may not have run a business before BrewDog, but he’s clearly been keeping an eye on things, pointing to Apple, Zappos, and Danish restaurant Noma as good businesses based around a “cause” in the book.

BrewDog’s passion is good beer. Watt says: “As a company we focus on two things — our beer and our people. We have done some sort of high-octane, risky, edgy, marketing things but they’ve all been done to increase peoples’ awareness and understanding of good beer.”

But how “risky”, “edgy”, and “anarchic” is BrewDog these days? It’s beer is stocked in huge supermarkets like Tesco, Sainsbury’s, and Waitrose.

“Our mission is to make other people as passionate about great beer as we are and we can’t do that if we don’t have the means to get the beer into people’s hands,” Watt says. “We’re about getting people excited about beer and do to that we need to get beer to market by any means possible.”

BrewDog pioneered the idea of equity crowdfunding in the UK, launching its first “Equity for Punks” campaign on its website in 2009.

Watt recommends crowdfunding to entrepreneurs, saying: “We love the Equity for Punks model. We’ve now raised over £20 million ($30.5 million), we’ve got a community of over 14,000 Equity for Punks investors who are advocates, who are ambassadors, who are principally linked to our business.

“We just love the fact that our business is owned by people who love fantastic beer as much as we do.”

The money BrewDog raises is going to be put towards everything from expanding its network of bars to opening a beer-themed hotel in Scotland and breaking into the “craft” spirits business. But BrewDog is still, and always will be, a beer company, Watt says.

“I don’t think it is more than just beer,” he tells me. “The hotel tacks on to the hospitality side of our business and we’re not looking to open a chain of hotels, we’re just looking to open one hotel up in the north east of Scotland.”

He adds: “I think the spirits tacks on nicely if you look at people like [US craft breweries] Anchor Brewing, Dogfish Head, Rogue, New Holland. With a beer, we’re more than 50% there to making a fantastic tasting spirit and we just want to do some more experimentation in that space. But the company is very, very much about beer.”

Watt says he and co-founder Martin Dickie would never sell the business to one of the big brewing conglomerates.

That’s not to say we wouldn’t exit at some point but there’s no plans at the moment,” he says, “and if we did, instead of selling to a bigger company, it would be a management buyout or to release some more equity to our Equity for Punk holders.”

BrewDog’s provocative marketing has been a key aspect of its business, and has gained them substantial international coverage.

They have produced progressively stronger beers of very high strength, and has laid claim to the title ‘strongest beer ever brewed’ on more than one occasion. In 2009,  a beer called “Tactical Nuclear Penguin”, with 32% alcohol, was claimed to be the strongest beer ever made, followed by “Sink The Bismarck” with 41% ABV, and a 55% ABV freeze-distilled beer called “The End of History”, with the bottles packaged in small stuffed  animals, priced at £500 and £700 each. Only 12 bottles were produced; 11 for retail sale, with the other one going to video blog BeerTapTV.

In 2011, BrewDog was described as “…one of the prime movers…” behind the campaign which changed the law in 2011 to allow new beer measures in Britain. London Olympic year 2012 saw them projected naked onto the houses of parliament, they made a special beer for the Olympics, launched the phenomenal Dead Pony Club and hosted 2,000 Equity Punks in Aberdeen for our rock ‘n roll AGM.

They opened their first ever international bar in Stockholm a year later, holding a funeral for generic beer in the centre of the Swedish capital. They were also flattered and bemused in equal measure when a fake BrewDog bar opened in China.

2014 saw their “assault on humanity” continue with the opening of 12 new BrewDog bars as far afield as Brazil and Japan, as well as the first BottleDog and the awesome DogTap bar at BrewDog HQ back in Scotland.

By 2015, BrewDog was producing about 2.2 million bottles and 400,000 cans per month. They open sourced their beer recipes to the public, making them a form of free beer. And it was time to go take on America.

Private equity firm, TSG Consumer Partners acquired a 22% stake in the company for approximately £213 million in April 2017, valuing the business at over £1 billion, and the first beer to join the “unicorn club” of billion-dollar start-ups.

Watt’s book Business for Punks bottles the essence of Brewdog an accessible, honest mani­festo, including mantras like 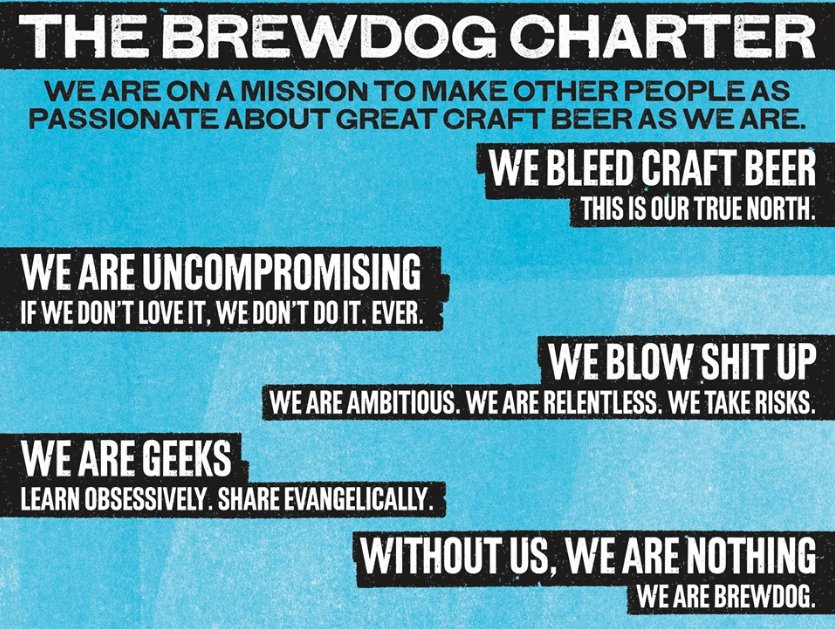 Here is a longer list of the best moments and messages from the book, delivered in typically provocative yet inspiring style: 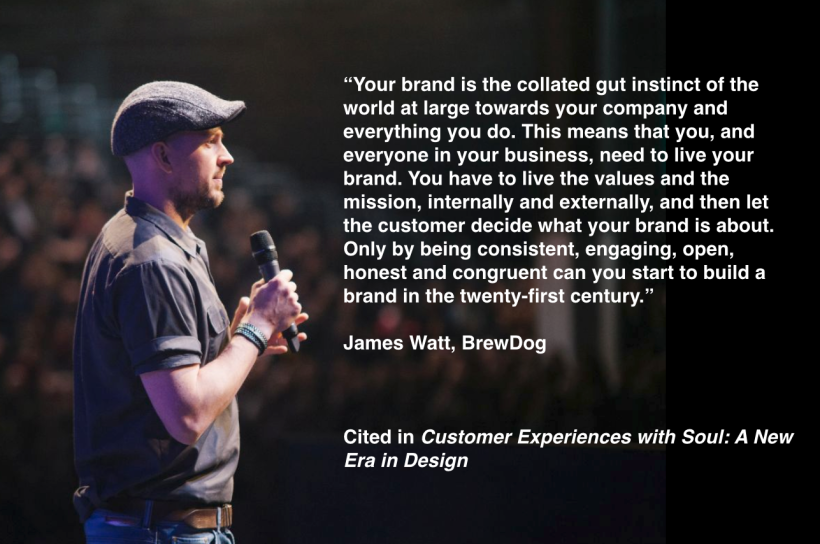