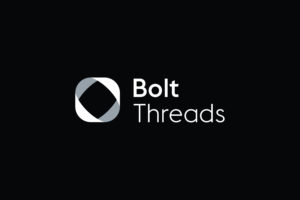 Bolt Threads  @boltthreads
@jaredzimmerman @nomadgoods There are so many great brands we'd love to work with in the future. Currently, as we a… https://t.co/ZWeeN0LDUk
reply retweet favorite

Bolt Threads is a materials innovation company. Taking nature as our inspiration, we use cutting-edge technology and biology to develop new textiles and materials that raise the bar for sustainability.

Bolt Threads is a biotech company based in Emeryville, California, that produces sustainable materials to supply the apparel industry.

In 2017, Bolt Threads released its first product, a $300 tie, made of Microsilk, a biomaterial designed to replicate the strength, elasticity, and durability of spider silk. In 2018, Bolt introduced Mylo, a biofabricated leather grown from mycelium, the root structure of mushrooms.

The material, now available in a tote, resembles genuine leather but doesn’t emit the greenhouse gases associated with traditional leather production. Bolt Threads’s larger goal is to disrupt the textile industry, currently the second largest industrial polluter in the world. The company has raised $213 million in four funding rounds.

CEO Dan Widmaier and a team of fellow scientists studied how spiders make silk to try and replicate that process using DNA samples similar to that of the arachnids. The silk fibers that spiders make are durable, soft, and can withstand a high degree of tension without breaking, similar to steel. To Widmaier and his team, it was the perfect source of inspiration for a sustainable material derived from “four billion years of life on this planet,” a focal point in the company’s mission statement. With the textile industry being the second-largest polluter on the planet next to oil, there’s always room for innovation of new materials.

Since Microsilk’s debut, Bolt Threads has received $213 million in funding and has catapulted into a comfortable limelight in the apparel and tech industries. Recent developments include a partnership with fashion designer Stella McCartney to create “vegan silk” and outdoor brand Patagonia, and a new synthetic leather material produced from the roots of mushrooms.