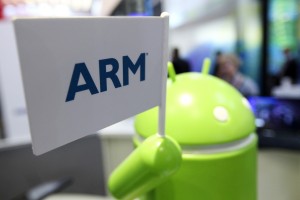 Arm  @ARM
@raulfrk19 Welcome to the team, Raul - we're looking forward to having you join us!
reply retweet favorite

Arm  @ARM
The @Raspberry_Pi Pico W has arrived!🥳 This new IoT platform is based on the RP2040, containing a dual-core Arm Co… https://t.co/9phGPdZYUm
reply retweet favorite

Designing the architecture of the digital world

Invisible to most of us, ARM is the Softbank-owned software design company from Cambridge, UK, that is responsible for many of the components inside our tablets and mobile phones. From smartphones and tablets, to cars and washing machines, ARM technology is at the heart of many of the digital products on the market.

What is unique about ARM’s business model is that it doesn’t actually make anything.

Ian Drew, ARM’s executive vice president for marketing and business development, described it “we make the knitting patterns for technology manufacturers”. From the iPhone to Nintendo games consoles, companies choose ARM designs because they result in better performance, with less energy consumption. “Partnerships are at the heart of ARMs business model, or ecosystem as we prefer to call it. It’s about innovating together, and making money together” says Drew “We’re in 95% of smartphones, 70% of laptops”.

The model works for ARM and its customers like Apple and Nokia. Investing, over a third of revenues on R&D with an expert team of 1200 chip designers, ARM is able to keep pushing the boundaries of chip design forward and the intellectual property that will drive the next generation of products. ARM licenses these reference designs to manufacturers through a combination of up-front payments to use the design and ongoing royalty fees. The whole industry therefore shares in relatively low-cost R&D, whilst ARM has sustainable revenue streams.

The business specialises in low power consumption processors, chips better suited to phones than high-powered computers, claiming that over 90% of all chips used in mobile phones originate on the drawing boards of Cambridge. However ARM also aims to be in 50% of all tablets and laptops by 2015.

Drew says “The internet of things – switching motors on and off, smart metering, healthcare, gaming and toys are all opportunities … things can make a big difference, like how our partner Enlighten which controls street lighting will be able to save millions of tonnes of CO2 because of our intelligence inside”. He sees ARM playing a major role in reducing the cost of devices. ARM-based chips for PCs will likely cost a bit more than the $20 for a chip, compared to $80 to $200 for Intel’s Core line of PC processors.

Drew argues that ARM is different from Intel in every way “We don’t go around saying ‘You have to build a product that looks like this.’ It’s our partners who come to us and say, ‘This is what we want to do, how can we work together’. That is radically different than Intel”. As part of this collaboration, ARM established Linaro, a not-for-profit network of over 120 engineers from the world’s leading tech companies. They work together on improving open source software for the ARM architecture, everything from power management to multimedia interfaces. Plans and progress are open to everyone on developer wikis, seeking to provide the best software foundations to everyone, and to reduce costly low level fragmentation.

The company, originally called Advanced RISC Machines was founded in 1990 as a joint venture between Acorn computers and VLSI Technology, with the Apple Newton, a forerunner to the iPad as one of its first collaborative projects with Apple who also took a stake in the business. 8 years later it restructured as ARM.

In recent years, investors have recognised the value in ARM Holding’s business model.

ARM is riding the wave of a smartphone market growing at around 20% per year. At the same time smartphones keep getting smarter, requiring more chips to support increased functionality, and premium chips that do more, faster, and with higher royalties to ARM.

Drew estimates that ARM’s partners are using its licensed designs to produce over 7 billion chips per year.

Pivot Points for ARM in “changing the game” of semiconductor design

Within five years Drew imagines ARM’s miniature chip designs (less than 1mm squared) playing an ever greater role inside everything from credit cards to sensors inside the human body. “As the cost and physical size of the chips continue to fall, tremendous opportunities emerge to make existing products more efficient and useful, and to create entirely new products, services, and business models”.

In July 2016, Japan’s SoftBank announced its acquisition of ARM for $36bn, but with a vision to continue ARM’s approach as a separate business, but with funding to double its size within 5 years.

ARM Holdings has been often described as the UK’s leading technology company. And while it might not be a household name, many products that qualify rely on the Cambridge company’s brainpower.

So, news that the business has accepted a £24.3bn offer from Japan’s Softbank has wide-ranging ramifications.

ARM doesn’t actually manufacture computer processors itself, but rather licenses its semiconductor technologies to others.

In some cases, manufacturers only license ARM’s architecture, or “instruction sets”, which determine how processors handle commands. This option gives chip-makers greater freedom to customise their own designs.

In other cases, manufacturers license ARM’s processor core designs – which describes how the chips’ transistors should be arranged. These blueprints still need to be combined with other elements – such as memory and radios – to create what’s referred to as a system-on-chip.

As a result, when you hear talk of a device being powered by a Samsung Exynos, Qualcomm Snapdragon or Apple A8 chip, it is still ARM’s technology that is involved. 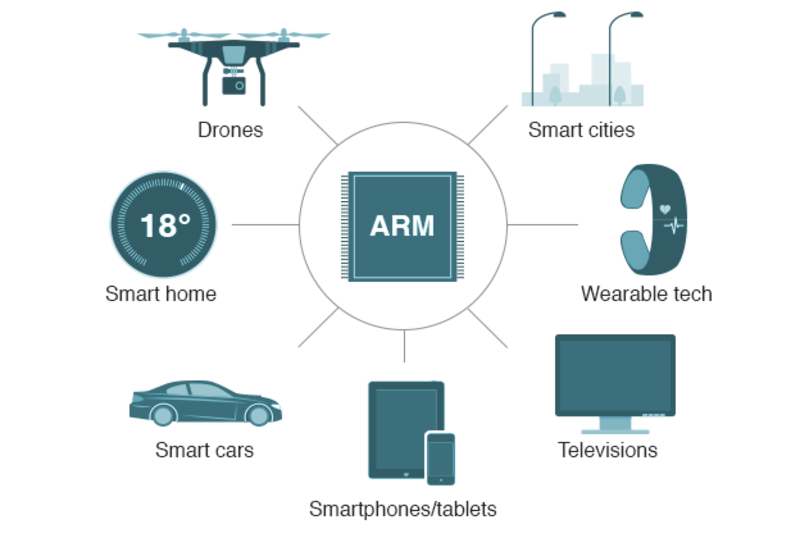 ARM microchips are used in many technologies:

Intel is often described as its chief competitor because it makes processors based on a different architecture, known as x86.

ARM’s reputation for power-efficiency has helped prevent Intel from making much headway with smartphones, but most Windows devices rely on the US company’s chips.

The company’s origins can be traced back to the success of the BBC Microcomputer in the 1980s. When its developer, Acorn Computers, sought to make a follow-up, it initially considered using chips made by others. But eventually, the company decided to make its own processors, whose name ARM stood for Acorn RISC (reduced instruction set computing) Machines. The resulting computers – the Acorn Archimedes series – struggled to sell. So, Acorn came up with a different business plan.

It created a joint venture with Apple, called ARM Holdings, to make a chip for the American company’s first handheld computer, the Newton, which launched in 1993. It also flopped. But there was, eventually, a silver lining. When Apple sold its 43% stake in ARM, it used part of the proceeds to buy Next, which led to the return of its co-founder Steve Jobs. Although Jobs shut down the Newton division, he would later use ARM-based chips as the basis for first the iPod, then the iPhone and next the iPad.

ARM benefited from the i-products’ huge success. But its focus on low-power usage also meant it had success elsewhere. Nokia built phones using ARM-based chips made by Texas Instruments. And other licensees included Sony, HP, IBM, Philips and Qualcomm. ARM has also been making in-roads elsewhere. It reckons its designs now account for about a quarter of all microcontrollers – a term used to refer to small computer chips typically dedicated to one specific task.

These feature in a wide variety of products including:

ARM’s technology is also increasingly being used in data centres and networking equipment – such as mobile base stations and routers – so, it should benefit from the imminent shift to 5G. In addition, the company has itself recently taken over several “internet-of-things” related businesses.

Although the sector is still relatively small, there are forecasts there will be a boom in demand for sensor-laden, internet-connected components that will be built into our homes, streets, clothes – and ultimately, even our bodies.

All in all, ARM says about 15 billion chips based on its designs were shipped last year, representing about a third of all chips used in smart electronic devices. And it thinks that number represents a fraction of its potential market in a few years time.

The danger has always been that if one of the technology giants bought ARM, then it might discourage others from using its designs or, possibly, provoke a larger counter-offer.

So, Apple, Samsung and Huawei – for example – are all happy to use ARM’s designs, but would probably not have wanted each other to have owned it outright.Intel had long been rumoured to have been a potential bidder, but such a merger would be difficult to clear with competition watchdogs.

As one of Japan’s biggest mobile networks, Softbank’s business has little overlap with most of ARM’s customers – which may mean they won’t see the takeover as a threat. Even so, there would be concern if there were any hint that ARM’s fees might be set to rise as a result.

Softbank is paying a 43% premium over ARM’s closing share price last week and is financing the deal by taking on more debt. Presumably, the Tokyo-based company believes our appetite for smart products to be very large indeed. 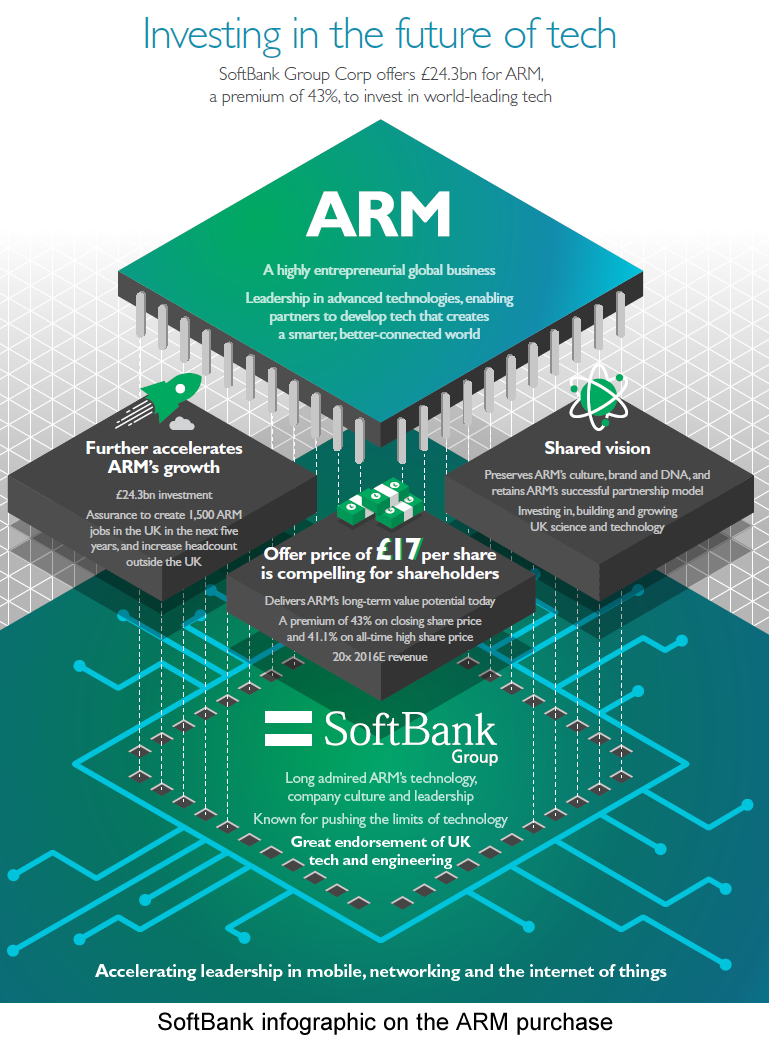