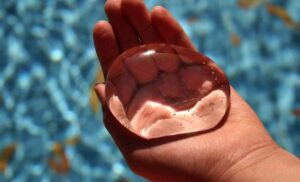 As technology transforms almost every aspect of the way we live, work, relate to one another, can it also save the world?

At present, we are using resources and ecosystem services as though we had 1.7 Earths and such an ecological overshoot is possible only for a limited time before ecosystems begin to degrade and, ultimately, collapse.

In just over 40 years, the world has witnessed 60% decline in wildlife across land, sea and freshwater and is heading towards a shocking decline of two-thirds by 2025 if current trends continue.

Forests are under pressure like never before with unabated deforestation and at sea, 90% of the world’s fish stocks are overfished.

New tech has the potential to transform environmental protection.

Nothing is as good as nature, but the latest tech innovations have the potential to make huge steps forwards in our fight against the effects of climate change, declining biodiversity, and much more.

The Earthshot Prize was designed to find and grow the solutions that will repair our planet this decade. We face our greatest challenge; to regenerate the place we all call home in the next ten years.

Here are some of the winners of the Earthshot Prize 2022:

NotPla: plastic alternative made from seaweed in England

Just 9% of all the plastic ever produced has been recycled and 12% has been incinerated. The rest lies in landfills or has been dumped into the oceans. Notpla is an alternative to plastic made from seaweed and plants. The London-based start-up was founded by Pierre Paslier and Rodrigo Garcia Gonzalez in 2019.

At the London Marathon in 2019 36,000 Notpla-made Oohos, filled with Lucozade, were handed to runners. This year, Notpla has made over 1 million takeaway food boxes for Just Eat Takeaway.com, with the potential to replace over 100 million plastic coated containers in Europe in the future. The company is continuing to research and develop new formats and solutions, with flexible films and rigid materials in the pipeline.

44.01 capturing carbon, turning it into rock in Oman

Named after the molecular weight of carbon dioxide, Oman-based 44.01 removes CO2 permanently by mineralising it in peridotite, a rock found in abundance in Oman as well as in America, Europe, Asia and Australasia. Peridotite mineralisation is a natural process, but in nature it can take many years to mineralise even a small amount of CO2. 44.01 accelerates the process by pumping carbonated water into seams of peridotite deep underground.

Unlike carbon ‘storage’, which involves burying CO2 underground in disused oil-wells or aquifers, mineralisation removes CO2 forever. This means there is no requirement for long-term monitoring or insurance, and ultimately makes the process more cost-effective, scalable and safer.

Founded by Talal Hassan, 44.01’s first project will mineralise 1,000 tonnes of locally-captured CO2 every year until 2024. The company aims soon to expand its operations internationally, enabling local mineralisation without requiring costly CO2 transportation. 44.01’s goal is to have mineralised 1bn tonnes of CO2 by 2040.

As the world transitions to clean forms of energy, 44.01 is also providing new employment to engineers and geologists working in the fossil fuel industry. Given Oman has the largest concentration of peridotite in the world, carbon mineralisation could also be a boon for workers in the region. By seeking to solve global problems, 44.01 will solve local ones too.

Growing up in Mukuru, one of Nairobi’s largest slums, for years Charlot Magayi sold charcoal for fuel. That charcoal was the cause of regular respiratory infections for her and her neighbours. Then, in 2012, her daughter was severely burnt by a charcoal-burning stove. Seeking a better solution, in 2017 she founded Mukuru Clean Stoves.

Rather than burning dangerous solid fuels, Mukuru Clean Stoves use processed biomass made from charcoal, wood and sugarcane. This burns cleaner, creating 90 percent less pollution than an open fire and 70 percent less than a traditional cookstove. They are cheaper too, costing just $10 and halving ongoing fuel costs.

Today, 200,000 people in Kenya use Mukuru Clean Stoves, saving $10 million in fuel costs and saving lives too. In rural areas, where young girls often spend three hours a day collecting firewood, they also save precious time. A female-founded business with mostly female staff and distribution agents, Mukuru is empowering women to make a living by making a difference.

Magayi plans to create an even cleaner stove that burns ethanol.  In three years, she hopes to reach one million customers. In ten years, she plans to reach ten million people all over Africa.

Here are some more examples, recently curated by WEF:

Blockchain to revolutionize the commodity markets

WWF in Australia, Fiji and New Zealand joined forces to stamp out illegal fishing and slave labour in the tuna fishing industry using blockchain technology. “From bait to plate”, the advances in blockchain technology can help consumers track the entire journey of their tuna – and potentially other agricultural commodities and fish – revolutionizing systems of certification and traceability. We can also use satellite data and cost-effective GPS tracking devices to ‘see’ and understand global fishing and global vessel traffic.

Remote sensing in planning and monitoring

On land as well, remote sensing plays an important role in planning, monitoring, and evaluating impact on the ground. It has enabled WWF to monitor the developments of extractive industries in socially and ecologically-sensitive areas, including World Heritage sites.

We’re also partnering with NASA’s Jet Propulsion Lab (JPL) and UCLA to develop an algorithm that enables the detection of deforestation from palm oil expansion using remote sensing data, and we’re exploring the potential to expand this technology to other commodities.

Protecting the world’s forests means ensuring land—in the right places—is protected or restored as well as healthy, providing people and wildlife what they need to survive, like clean air and water, food and jobs. And that’s where drones come in to play, acting as our eyes on the forest. And it’s not just WWF that is using this technology.

Every night, park rangers patrol the pitch-black savanna of Kenya’s Maasai Mara National Reserve. They search for armed poachers who spill across the border from Tanzania to hunt for bush meat and ivory. For years the number of poachers overwhelmed the relatively small cadre of rangers. Technology is now helping to turn the tide. Thermal imaging video cameras enable rangers to catch poachers at record rates and deter many more from even making the attempt.

Beyond direct interventions to stop poaching, WWF also uses technology to go after wildlife traffickers. To that end, we’re working with a coalition of leading e-commerce and social media giants in the US and China to root out the sale of illicit wildlife products on their platforms.

It is hard to think of technology and nature together but even advances like Artificial Intelligence (AI) that could not be further removed from the natural world are helping conservation efforts.

In China, WWF and tech giant Intel are harnessing the power of AI to help protect wild tigers and their habitats, while also protecting countless other species as a result while helping carbon storage, vital watersheds and communities in the area.

An engaged public is critical

As we engage new partners and pursue novel applications of technology, we believe an informed and engaged public is critical to this work and we are constantly looking to make people aware of the challenges facing our planet and what we’re doing to solve them. In 2016, WEF partnered with Apple to create an Apps for Earth campaign that raised $8 million and educated millions of people around the world about core conservation issues. More recently, we leveraged Apple’s augmented reality tools to launch the “WWF Free Rivers” app that invites people to experience the importance of free-flowing rivers for nature and for humans, and demonstrates how ill-conceived economic development endangers them both.

From whirlpool turbines to edible cutlery, water blobs, and package-free shampoo and toothpaste, here are 22 more innovations to cut back on plastic, reduce garbage in the sea, and make the Earth a better place.