Future Retail … What’s the future of shopping? … Jeff Johnson had the right idea, when he opened Nike’s first store in 1966 … and so did Tobi Lütke, with Shopify in the digital world 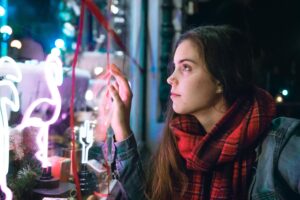 Jeff Johnson was Nike’s first-ever full-time employee. His task back in 1966, having joined Phil Knight and Bill Bowerman in the start-up sportswear business, was to create the company’s first store in Santa Monica. As Knight says in his great book “Shoe Dog” the store became a “holy of holies” for runners.

Johnson loved books as much as he did running, and the shop’s shelves were packed with book he thought runners should read. He added photos of all the best runners, and memorabilia from events, alongside the early running shoes from Nike (actually made by Asics Tiger at the time, and imported from Japan). Johnson also kept card files about each of his customers, including their running history, aspirations and shoe sizes. He sent them Christmas cards and congratulatory  if they won a big race. Johnson became a source of knowledge and inspiration – for injury advice, for training plans, for future events – and the store became a Mecca for runners.

In 2002, a young German Tobi Lütke moved to Ottawa Canada to be with his girlfriend. His great love, however was snowboarding, and having failed to find a job he decided to open a local snowboarding store. Like Johnson, Lutke’s passion was the thrill of the sport and his store quickly became a place where snowboarders could hang out, share stories and experiences. However, with a background in coding, he saw how he could scale this idea in the digital world. Shopify was born as way to allow any small physical store to create an online version. But not just to sell products, to engage consumers in what they do, and love. Shopify has grown rapidly across the world during the pandemic. Replicating the power of physical engagement, digitally.

The pandemic has fundamentally disrupted the way people shop, for ever. Online retail has soared as physical shops and malls have closed. The future-focused retailers, and the brands who used to line their shelves, are now racing to win the battle for buyers, with the most important tool, their customers’ data. While most people look at the online giants like Amazon and Alibaba, online retail has grown into much something much more than transactional megamarts.

Take Glossier for example, Emily Weiss creating a consumer-to-consumer community and using the power of its fans to build a loved beauty brand. Take StockX, the online auction site for fashion, where fashionistas snap up the latest drops, then flip them within in minutes, reselling for a huge premium. Take StitchFix, a subscription based fashion retailer, that sends you a box of clothes each month, send back what you dont want, through which it learns what you really like. Take Pinduoduo, fusing social media and online retail, gamification and entertainment, to immerse people socially in a mall-like experience. Take Jio, the Indian super app, which is converging every sector to transform how Indian’s live. Take Epic, the gaming platform, which is embracing metaverse thinking to become a destination for any brand seeking to engage with GenZ, and branded stores like Gucci Garden.

The most successful retailers will be those that connect with consumers in new ways by leaning in on their digital, omnichannel, and in-store technology ambitions. But this is not “digital or physical” but a dynamic liquification of experiences, a fusion of human physical experiences enhanced and enabled by smart, intelligent tech.

Alibaba coined the phrase New Retail, as a vision for digital, social, realtime shopping. Livestream shopping on social media is rapidly disrupting traditional e-commerce in China. At the heart of this online craze are the top influencers who sell millions of dollars worth of products every night. Now there is over 500 million active livestream shoppers.

Here’s my recent keynote at the Austrian Retail Forum – exploring the changing world, across geographies and sectors, and understanding what they means for retail. I bring together insights and ideas from companies – including retailers – in every part of the world, to identify the big questions, the enduring trends, the new concepts, and the priorities for business leaders.

Contact me at peterfisk@peterfisk.com for retail keynotes, workshops – and for other sectors and topics too!