Terra Incognita … anxieties and inequalities, fragility and sustainability, machines and trust … a fabulous new map of current and future uncertainties. How do you make sense of today’s world of relentless, uncertain change?

Perhaps every boardroom needs a futurist in residence. Certainly, the old approach to incremental strategy development has given way to a much more creative and exploratory approach to business strategy, built around future casting, scenario planning, and agile roadmaps.

But that means it’s perhaps more important than ever for leaders to have a view of the future, to explore its possibilities, threats and opportunities – and to have a mindset which seeks to shape the future you want, rather than let it shape you.

He’s a great guy. Intelligent, humble, and a courteous listener. He’s also incredibly thoughtful, an avid reader, a curator of everything going on – from sci-fi movies to academic whitepapers, trend analysis to media reports.

The future seemed relatively certain then. The “dotcom boom” was crashing down around us, the growing pains of the early internet, third world economies were starting to grow, and the post-communist world seemed to be stabilising into a new world order.

Now in 2022, we have more change, more uncertainty – and therefore more opportunity, I would argue – than ever before.

Richard’s trends, his perspectives on possible futures is an essential starting point for any leader, strategist or innovator. I use his work as a constant source of inspiration for strategic vision, growth and innovation workshops with leaders and their teams.

12 years ago Richard sketched a “Trends and Technology Timeline” map of the next 40 years.

The timeline map became an icon in offices and boardrooms of companies around the world. I’ve seen life-size (2-3m high versions) of the map at Microsoft’s campus in Seattle, Russian Railways in Moscow, and DBS in Singapore!

Richard has also doodled and perfected a wide range of other maps (or thinking tools, as he calls them) too. 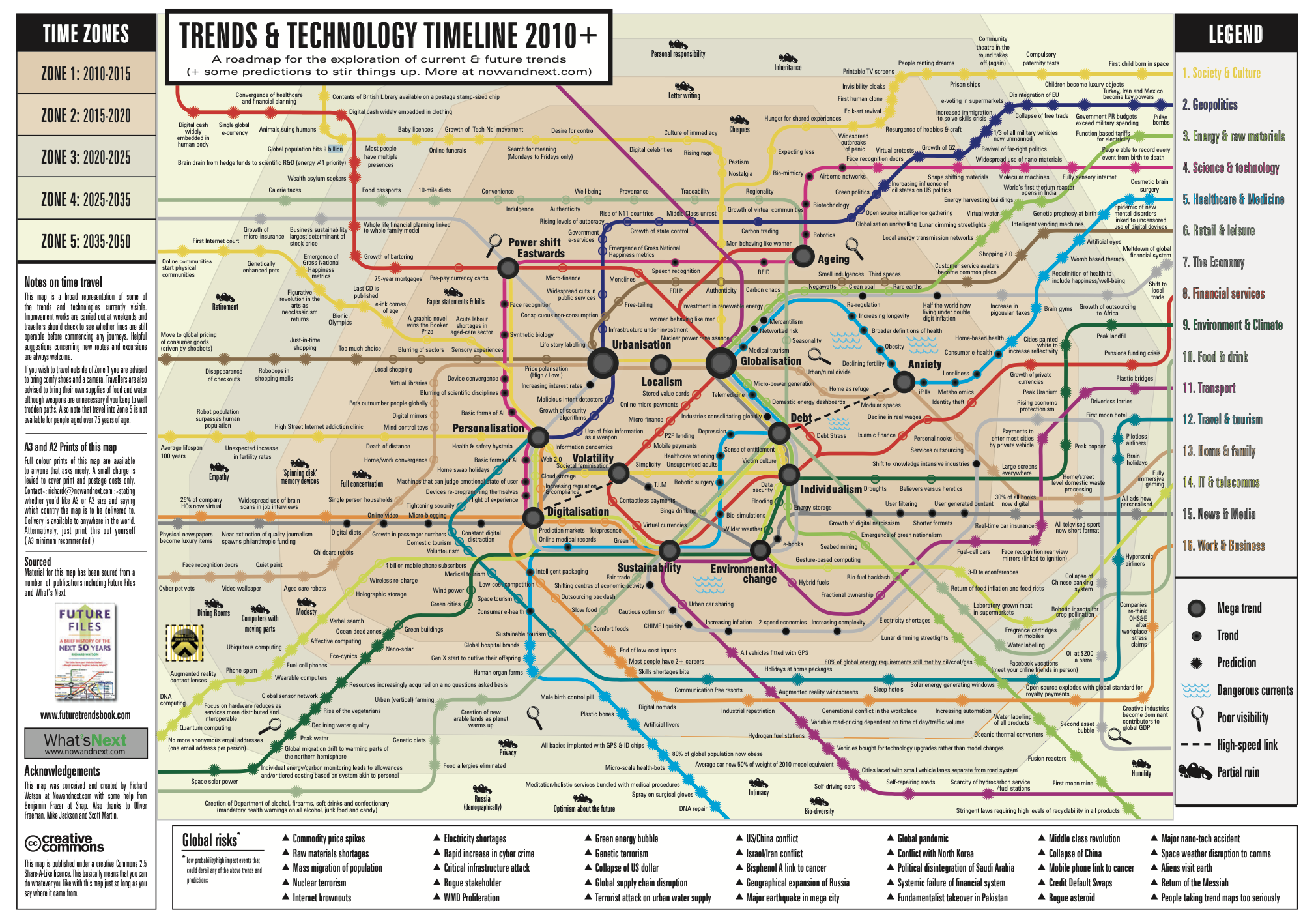 Here, he explains the map, during a session in London:

But now Richard has a new map for the 2020s … seeking to make sense of the patterns, fads and trends, disruptions and transformations, which are shaping our uncertain future.

Here’s his early sketch of “Terra Incognita: A Map of Current and Future Uncertainties” … and the finished map.

His thought process starts with axes which reflect the major tensions for leaders in today’s world – chaos v control, principle v profit. Of course these factors can co-exist, but forces can easily drive us to paradoxes, and in different directions.

In particular look for the critical uncertainties – something which is likely to be hugely impactful, but is also highly uncertain.

Richard’s insights and inspirations are a great starting point for developing future scenarios of your market, and your business. How might the future emerge? How do you want your future to emerge? 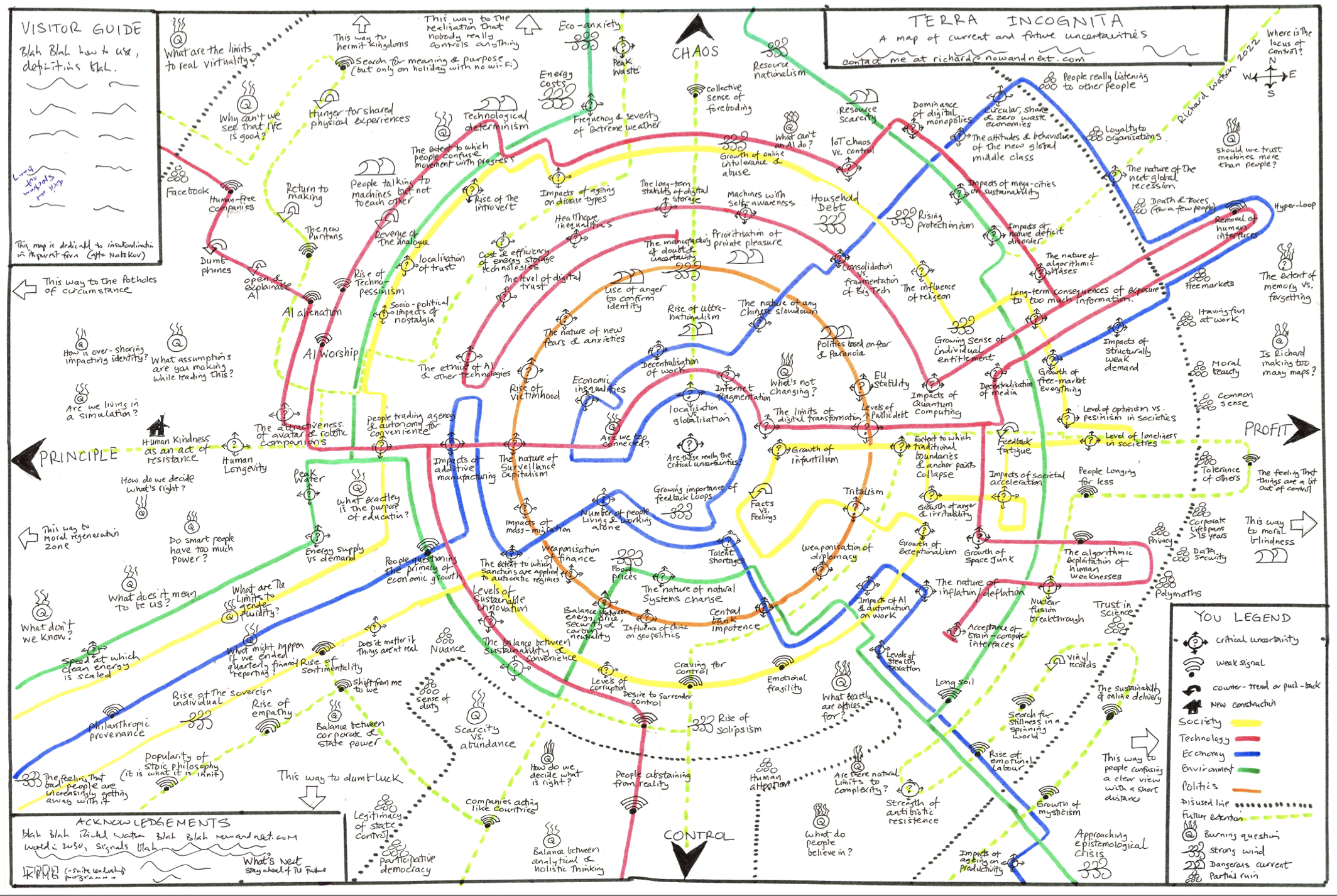 And here’s the final version … Terra Incognita  … print it out, pin it up, start exploring! 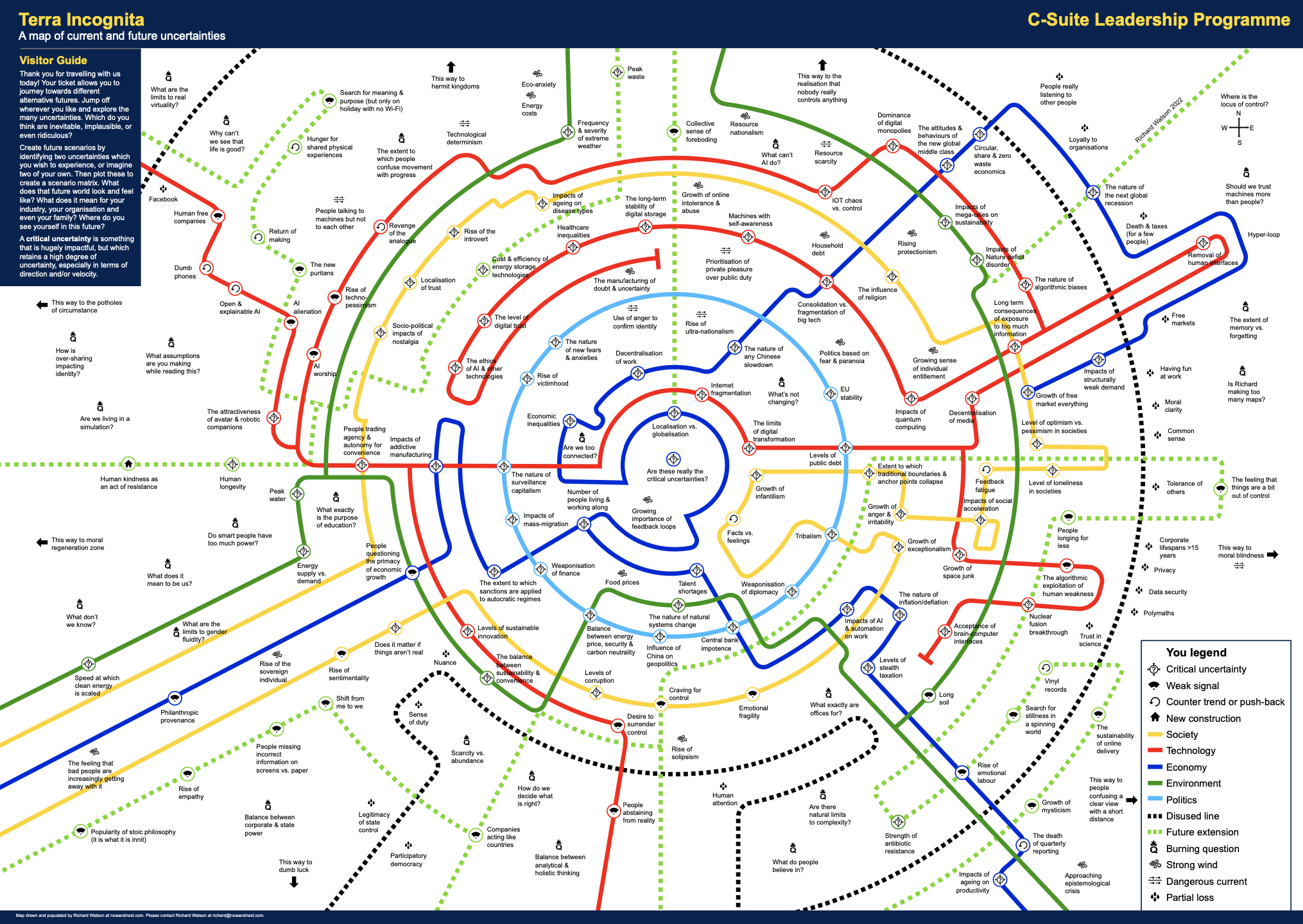 As an example of what to do next with a map like this, I recently worked with one of the Middle East’s fastest growing business groups. They’re in many businesses, and could grow in many directions, industrially and geographically. Where’s the growth? Where’s the risk? How should they act differently?

Future-back strategy is my favoured approach, starting with an ambitious purpose, a North Star, to give direction and substance to why the business exists, what it does for the world. From their we worked through an accelerated scenario planning approach, embracing the critical uncertainties most relevant to the business and its markets. From their we developed a vision framework which then flows into a strategic roadmap, and transformational plan for innovation and growth.

Sounds simple, but there is much to it. Not least having a powerful sense of of the future, and how you will shape it to your advantage.

And my new book Business Recoded: Have the courage to create a better future.