Kilian Jornet … the world’s greatest mountain runner, born in a Pyrenean mountain hut, who ran up Everest twice in a week 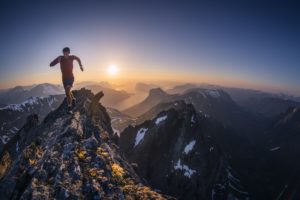 The 34 year old Spanish ultra runner, who is now based in Norway, because the mountains are bigger, probably took longer for his last kilometre than any of the other previous 170 kms that he’d just covered. He weaved his way through the town’s narrow streets, high-fiving the huge crowds that awaited him, and celebrated yet about “ultra” victory.

He crossed the finish line of the Ultra-Trail du Mont-Blanc (UTMB) in a course record of 19 hours 49 minutes, his fourth victory in the event, and the first time anyone has completed the full distance in under 20 hours.

Last month he had also won the Hardrock 100 in Colorado USA, a gruelling 100 mile trail run for the 5th time. In between, early this month he had also taken in the Sierre Zinal mountain race. And trained every day in between.

UTMB is the world’s leading mountain ultramarathon, a distance of approximately 171 km (106 miles), and a total elevation gain of around 10,040 metres (32,940 ft). Starting and finishing in Chamonix, France, it takes runners an a circular route through Switzerland and Italy, and is widely regarded as one of the most difficult foot races in the world, and one of the largest with more than 2,500 starters, although massively oversubscribed.

Born in a Pyrenean mountain hut

Kílian Jornet Burgada is a 34-year-old Catalan ultra-distance runner, and arguably the most famous, prolific, and dominant mountain athlete of all time.

He has won pretty much every major ultra race, smashed numerous endurance records, and pushed at the limits of what anyone thought was possible in the mountains.

His obsession is less about winning races or setting speed records, and more about the joy of nature, of mountains, and the challenges they provide.

That passion stems from his childhood. He grew up in a mountain hut, in Refugi de Cap de Rec, in the Spanish Pyrenees, where his father worked as a hut keeper and mountain guide.

From a young age, he lived and breathed mountain life. “The first time I walked for five hours alone in the mountains I was two years old!” he says. He went on to climb his first 3,000m peak aged three. “I have conditioned my body to long distances from an early age!” he says.

It clearly paid off. These days he is known for dominating not one, but two mountain sports – ski mountaineering in winter and trail running in summer.

As a trail runner he’s proved himself to be one of the world’s best – dominating ultras and setting a slew of records from the Ultra Trail du Mont Blanc to the Hardrock 100 and dozens of races.

In an interview with Runners World, he says “I had a normal childhood, just that my playground was the forest and mountains instead of the streets”.

The family would spend weekends and holidays trekking and climbing local mountains. By the age of 3, he had climbed the 3,011m mountain, Tuc de Molières. At 5, he climbed the highest mountain in the Pyrenees, Aneto (3,404m). At 6, he climbed the Breithorn (4,164m) in the Italian/Swiss Alps. When he was 10, a family holiday was to hike for 42 days across the Pyrenees. By 13 he had taken up ski mountaineering, and by 16 he had joined the Spanish national ski mountaineering team.

He says the most important lesson that his parents taught him and his sister growing up was  “to be conscious that we’re a part of nature, to understand how it works and respect it.”

The world’s most prolific mountain racer

In his excellent book Run or Die, he writes “Winning isn’t about finishing in first place. It isn’t about beating the others. It is about overcoming yourself. Overcoming your body, your limitations, and your fears. Winning means surpassing yourself and turning your dreams into reality.”

“In one race I can finish first, and because it was not a competition or I wasn’t happy about my race, not feel like a winner and see after 20 hours someone reaching the finish line in 1,299th position and see he is crying of happiness to finish. This is a winner.”

Jornet sets his goals higher than most people.

After years of claiming first place at the world’s most prestigious races, he came to the realisation that he had completed all of his race goals.So, to find new ways to push himself, he started to create his own challenges.

Combining running, skiing, and climbing, he began a personal project in 2010, to set the fastest known times for ascending seven of the world’s most famous mountains. He called the challenge Summits of my Life.

He summited Mount Everest at midnight (local time) on 22 May 2017. Climbing without supplemental oxygen, he reached the top in 26 hours from base camp.

Upon finishing his first ascent of Everest, and unhappy with his time of 26 hours, he found the idea of resting and recovering boring saying “I don’t like to spend time in the base camp doing nothing, so it was like ok what do we do for the next week?” On 27 May he reached the summit again from advanced base camp in 17 hours.

Training for elevation not distance

He doesn’t have a coach or a prescriptive training plan, but prefers to train in accordance with how he feels, and usually its far, twice a day, every day.

Training is a goal in itself, not something that must be done to achieve a goal. He measures his efforts not in distance, but in elevation. In a typical year, he can log up over 1,000 hours and some 55okm of elevation gain.

He sees the year in two seasons – the ski season, and the trail running season.

During the ski pre-season, November to December , he  trains between 20-30 hours a week on the slopes. He takes in 20-25 races, combined with high volume training and periods of recovery, meaning that his weekly activity can range from 10-30 hours.

From May to October, he runs.  He trains between 20-35 hours a week, typically training twice a day, and spends 80% of the seasons training running, and 20% on cycling on his road bike.

Eating and drinking properly play a massive part in an ultra-runner’s success, and yet he is no stranger to break-in the rules.

In a 2011 interview with Salomon, he said “my diet mainly consists of pizza and Nutella”.  More recently, he says he opts for a carb-heavy plant-based diet centred around whole foods – pasta, potatoes, bread, and a wide variety of vegetables.

His wife Emelie Forsberg is also an ultra-runner from Sweden, and also competes in ski mountaineering and skyrunning events. In 2016, they set up home in Rauma in Norway, “where the mountains are steeper, and the air is purer.” They now have two young children, who have just started running.