Fearless and Fearsome … building extreme teams at Google and Netflix, inspired by the All Blacks’ “Kapa o Pango” 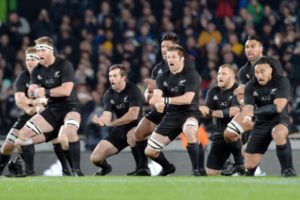 In the search for agility and speed, creativity and difference, organisations are focusing on the power of teams. Here, in an extract from my new book “Business Recoded: Have the courage to create a better future” I explore why and how extreme teams are the future of work.

Richie McCaw, the former captain of New Zealand’s “All Blacks”, is regarded by many as the greatest rugby player of all time.

His teams won a remarkable 89% of their 110 matches in which he was their leader, including two World Cups. He even played through one cup final with a broken foot, knowing that he was a key component of the team. Whilst he recognises that the team is always more than any individual, he also believes that a leader defines a team, brings together and creates great individuals.

After lifting the World Cup in 2015, McCaw said “We come from a small Pacific island, a nation of only 4.5 million, but with a winning mindset. At the start of each game, when we lock together in our traditional Maori haka, we know that we are invincible”.

The All Blacks have a bold and unwavering ambition to win, working on a 4-year cycle with a common team, and setting mini goals along the way to retain sharpness and evaluate progress. They search out the best players who bring each technical specialism, but equally who will work best together, whilst also retaining a search for new talent and skills.

Being part of the team is everything, with a sacred induction, and commitment to the higher purpose.

As a team they constantly evaluate, challenge and stretch, themselves. They search the world of sport and beyond for new ideas, ways to improve physiological fitness, mental agility or technical skills. Like most sports, whilst they have a coach to guide them and captain to lead them out. Their approach once in the game is that every one of them is a leader, all equal, all responsible, and all heroes when they win.

McCaw talks about some of the distinctive beliefs which the team has embraced. These include many concepts from Maori culture, such as the “Kapa o Pango” which is the name of the haka, the traditional dance performed by the team before every match, and reflects the diversity of the nation’s Polynesian origins.  Such rituals become important in bonding the team, but also in creating its identity to others.

Another Maori concepts is “whanau” which means “follow the spearhead” inspired by a flock of birds flying in formation which is  typically 70% more efficient than flying solo.  And finally “whakapapa” which means leave a great legacy, or translated more directly,  plant trees you’ll never see by being a good ancestor.

Netflix has built a culture of “freedom and responsibility” which has helped it to dare to innovate more radically, and transform an industry. Pixar’s teams work together in wooden huts as an individual but collective workspace, embracing an openness of debate to turn initially mediocre ideas into billion-dollar hits.

Teams are where innovative ideas are most often conceived, futures shaped, projects implemented, and where employees experience most of their work. But it’s also where the biggest problems can arise in limiting the effectiveness of organisations.

Alphabet recently set about investigating what makes a great team, in what they called Project Aristotle, a tribute to Aristotle’s quote, “the whole is greater than the sum of its parts”.

Effective teams, they concluded, have a high degree of interdependence, more than just a group working on a project, or functionally aligned. They have a distinctive identity, and loyalty to each other. They plan work, solve problems, make decisions, and review together, and know that they need one another to achieve success.

Alphabet found that what really mattered was less about who is on the team, and more about how the team worked together. In order of importance, they found that effective teams are:

Each Whole Foods store manager can act largely autonomously, aligned by clear metrics but responsive to local communities and the passions of their local team. Zappos, the online fashion retailer, also now part of Amazon, embraces “weirdness and fun” as the ingredients to sustain their team success.

Amy Edmondson’s book “The Fearless Organisation” focuses on Alphabet’s top priority, that teams need to have psychological safety, and how teams create safe spaces in organisations for people to be open, creative and grow.

Psychological safety is created through 3 factors:

Extreme teams, like the All Blacks, take these traits to the limit. They seek great individuals who are prepared to work collectively, with commitment and courage. They seek more diversity, bringing together differences of capability and opinion. They thrive on dynamic conversations that can embrace extreme ideas. And they have a profound belief, that together they can achieve amazing results.

Interview with Peter Fisk on the future of organisations, and the ability to embrace new talent that drives diversity and creativity within traditional organisations. The article appears in the September 2021 edition of Fast Company magazine:

Fast Company: Is seeking out such swashbuckling, rule-breaking oddballs a sound strategy for upping the innovative IQ of an organization whose leaders don’t naturally think like innovators? Why or why not?

Organisations thrive in a world of uncertain yet relentless change on their “cognitive diversity” … much more than a agile mindset, this is the willingness to embrace ambiguity rather than wait for certainty, to embrace extreme insights and ideas over mainstream averages, and to resolve paradoxes with new creative fusions.

Innovation lies in “extreme teams” who have both the stretching challenge, and pyschological safety, to challenge conventions, and to embrace boldness. These become the new powerhouses of organisations, which have replaced formal hierarchies with self-organising organic networks, focusing on customers and opportunities, rather than organised for efficiency and continuity.

A great example is Haier, the Qingdao-based world’s leading home appliances business. In my new book “Business Recoded” Haier’s CEO Zhang Ruimin describes his “rendanheyi” approach to organisations, an organisation of 1000 extreme teams, each essentially a micro-business of no more than 100 people, but each with the support of corporate resources and branded ecosystem.

The same approach to “extreme teaming” – the ability to bring together a juxtaposition of talents, skills, perspectives and experiences – demonstrates the real power of “diversity” in its broader sense, in organisations today. Google’s Project Aristotle recognised these qualities in its search for a perfect team, as did design company IDEO in recruiting eclectic teams of scientists, engineers, artists, and business people in its design teams.

Over the last decade as hierarchical organisations have stagnated, they have sought to embrace an entrepreneurial culture, perhaps through design thinking, corporate venturing, or seeking to follow Eric Ries’ start-up bible. Instead they should play to their strengths, using their scale to embrace much greater cognitive diversity – and ultimately portfolio of projects, innovations, and businesses – in a do what start-ups could only dream of doing!

Fast Company: In our experience, Rare Breed individuals don’t want to work in environments that are dull, repressive, or where they feel they cannot be themselves. They also are more likely to be outside the mainstream in terms of racial and ethnic identity, gender identity, appearance, social interaction, and even hygiene. How can leaders evolve their cultures to be more enticing to such “fringe” people without chasing away the more conservative employees who also play vital roles in keeping things running?

Microsoft’s incredible value-creating rebirth under Satya Nadella will be written about in time, as the model of how large organisations finally reinvented themselves for a post-hierarchical age. Nadella really only used two tools to drive a cultural transformation – inspiring purpose (an empowering focus on what customers do, not the products themselves) and a growth mindset (to experiment, to break rules, to reject the old corporate model).

Today’s most enlightened organisations are becoming “platforms for talent” – creating the space, support and stories for individuals to unlock their full potential. That requires a radical shift in thinking. Of leadership understanding. Of strategic agility. And patience. It goes far beyond Google’s boot-legging or Lego’s creative play. It’s when organisations learn to play jazz, not to follow the classical score – to unlock their humanity, and human potential.

Of course, many organisations are not ready for that, or don’t have the capacity to cope with such chaos – smaller companies seek to retain single-minded focus, finance or pharma have their regulatory excuses – but ultimately they need to embrace such approaches. The Pfizer vaccine emerged out of an ecosystem of partners, most notably Biontech, who were prepared to go to extremes and pursue what seemed like crazy ideas.

The speed of transformation in so many markets around the world, requires this mental as well as physical agility, achieved by cognitive diversity – look at Jio in India, Grab in Singapore, or even more traditional organisations like Siemens in Germany, and Fujifilm in Japan. It is supported by an ambidextrous strategy – to deliver today, whilst creating tomorrow.

This requires dual transformation that builds a customer-centric portfolio of solutions for today, and a portfolio of innovative business ideas for tomorrow. “Fringe” people were only so-named when the organisations only focused on today, on the mainstream, on the core. Now there is more space, and more need. Jobs shift from function roles to projects, stability gives way to speed, crazy ideas and being different is the new human advantage.

Fast Company: Presumably, there are some people like this hidden in the headcount of any large company, afraid to show their true colors. Since it’s much easier to find and develop game changing talent in-house than to try to recruit it elsewhere, how can leaders spot and develop the people who “think around corners” who are already on their payroll?

Eliud Kipchoge is the world’s greatest marathon runner, the first man to break two hours, the double Olympic champion. 6 years ago, a fading track athlete, and having passed his 30th birthday, he was considering retiring. Instead he stepped up distance and took on the marathon. He knew he needed to change. He started doing yoga, he moved out of his nice home into a training camp, and he sought to learn everything from other sports like cycling.

He knew he needed to find something different to perform at a level nobody had done before. In the same way, organisations increasingly recognise that success in the post-Covid 2020s won’t be achieved go getting “back to normal” but by embracing difference. This is a mindset. It needs leaders with a “future mindset”, with curiosity and courage, who seek to find new directions. A mindset, that then becomes a culture in everyone.

Organisations of the future are not about status achieved through years of service, depth of expertise, or even historic performance. They bring together young and old, eclectic skills and attitudes, oddballs and misfits. To do so, they will need multiple contracting formats, and multiple working formats. This will be the great legacy of Covid-19’s disruption to the old ways of working, themselves a hangover from the industrial revolution.

At GM, Mary Barra used her acquisition of AI-driving system Cruise to symbolise and galvanise a rebirth of a bankrupt giant. Jim Snabe has done the same over the last few two years at Maersk, turning the world’s largest container shipping company, into a futuristic blockchain-based logistics network. These organisations thrive on transformational projects – forget functional roles, forget job descriptions, even forget old notions of employment.

I started my new book by saying “the next 10 years will see more change than the last 250 years”. We have already  recognise the transformational impact of shifting markets, data-driven tech, and new agendas. But it’s organisations that will make the change happen – the new ecosystems of talent, led with a future mindset, fusing together as extreme teams, and the courage to create a different,  better future.