Tobi Lütke … How the German-Canadian created Shopify, and is now shaping the future of retail 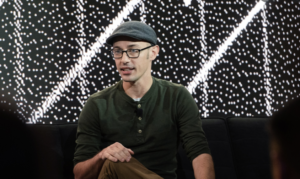 As part of the Business Recoded project, and my new book, I profile one of the most inspiring business leaders shaking up today’s world. He embraces the opportunities of relentless change, the power of disruptive technologies, and the courage to create a better future in his own vision. In the book, I explore the stories of many of the world’s most fascinating leaders right now, and develop 49 codes that help you redefine the future of your business, and yourself.

The Leadership Code of Tobi Lütke

Shopify is taking the world’s retailers online. As the world locked down amidst pandemic, stores great and small lost their entire footfall. Overnight, many turned to the Canadian tech company for the tools that allowed them to relaunch, not just with a virtual store, but with the marketing, warehousing, payment and distribution infrastructure too. A small town store could instantly transform itself into a global player.

Shopify now supports over 1.6 million websites in 175 countries, and handled over $120 billion in sales during 2020. Its own revenue grew 86% to $2.9 billion over the last 12 months, and its market capitalisation from $46 to $137 billion in one year, making it Canada’s most valuable company.

40 year old Tobias Lütke grew up in Koblenz, Germany, and started writing code when he was 11 on his Schneider (aka Amstrad) computer. Dropping out of school at 16, he found an apprenticeship with Siemens. His boss was a guy named Jürgen Starr who Lütke idolised. “He was a long-haired, 50-something, grizzled rocker who came to work on his BMW motorcycle and wasn’t wearing a suit like he was supposed to” says Lütke. He immediately gravitated to him and his little group of rebels. “Jürgen was a master teacher. With him, I had 10 years of career development every year”.

Lütke met his wife Fiona in Canada on a snowboarding trip, and in 2002 moved to Ottawa to be with her. Without a degree, he couldn’t get a work permit, but could start a company, so launched an online snowboard shop,Snowdevil, with the financial support of Fiona’s parents (still his largest shareholders, and now billionaires). He struggled to find software to build his site, particularly one that went beyond a catalogue grid, and focused on the stories of snowboarding enthusiasts. Eventually he taught himself to code in Ruby, an open source language, and launched in 10 weeks. He soon started to get more enquiries about his site than his snowboards, people wanting to license his software.

In 2006, Snowdevil was relaunched as Shopify, licensing Lütke’s online store software, and also creating an API (application programming interface) platform that enabled other developers to offer additional tools through the Shopify app. In 2008 he headed to San Francisco at the invitation of several investors, although wasn’t sure he needed money as most of the programming was done by himself. Investors wanted him to move to Silicon Valley, but he refused, saying location is irrelevant to a modern business. However when the global financial crisis struck, he struggled to pay his small team turning to his father-in-law for support again. The silver lining came with a huge growth in customers during the downturn, as many people turned to starting up their own businesses.

In 2010, he launched a Build-a-Business competition, using his own toolkits, with significant cash prizes, and Richard Branson and Eric Ries as mentors. The business grew rapidly, partly by acquiring other software design businesses, and focusing on improving systems for everything from payments to flash sales, warehousing to distribution. In 2015, a year after finally moving out of his parent-in-law’s home, Shopify went public. It also became Amazon’s recommended partner for its Amazon Webstore merchants, while also developing new digital tools for physical stores too.

In 2018 Shopify opened its first physical space in LA, offering workshops and support to small businesses that use Shopify tools. In particular, it has retained a retail vision far beyond transactions, investing in creative studios to help retailers to develop new types of content, from blogs and movies to gamification including esports, and also to embrace social platforms like Instagram and TikTok. Shopify Balance enables farmers, craftsmen and small retailers to manage every aspect of their business online, from their smartphone.

Despite his success, and $9.8 billion net worth, Lütke still shares the passion of Shopify’s entrepreneurs, and is even said to have his own secret Shopify-built store, selling socks.