Leaders are the sense makers and future shapers … Do you have the courage to create a better future? 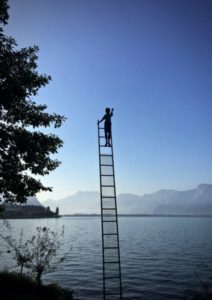 “What it Takes” is the memoir of Steve Schwarzman, cofounder and CEO of Blackstone, one of the world’s largest investment firms.

He talks about why leaders need clarity of purpose, to dare to think big, and realise the profound impact of AI. One of his favourite sayings is that “it is just as easy to do something big as it is to do something small”.

Schwarzman grew up in an entrepreneurial family selling curtains in Philadelphia. His father was content with owning one store, but Steve was not. He had more ambition. At high school he wanted to bring the best bands to play. At college he started a dance society to meet more girls. He joined Lehman as a trainee, where he learned about finance and discovered his real strength. In 1985 he co-founded Blackstone with friend Pete Peterson, and grew it to hold over $500 billion in assets under management.

He believes that leaders in today’s complex and uncertain world need clarity of purpose, to dare to think big, and realise the profound impact of AI, saying “it is just as easy to do something big as it is to do something small”.

He believes that successful leaders must have the confidence and courage to act when the moment seems right. They accept risk when others are cautious and take action when everyone else is frozen, but they do so smartly. This trait is the mark of a leader. “To be successful you have to put yourself in situations you have no right being in. You shake your head at your stupidity, but eventually it gives you what you want.”

Courage, according to my dictionary, is the choice to confront agony, pain, danger, uncertainty” and includes moral courage, “the ability to act rightly in the face of popular opposition”. Creating the future take courage.

Courageous leadership is what every employee hopes for and what every company needs. A courageous leader guides their people, empowers them by example, gives everyone confidence to do their jobs to the best of their ability.

Do you dare to create the future? The answer might seem obvious, but it means letting go of today, of what has worked over time, and what may still be delivering fairly good results.  Of course, there are ways to mitigate risks, and to do both, but it is typically a leap forward.

Courageous leaders have a strong belief in themselves, and whilst the future may still seem uncertain, you need to believe in the choices you make. Yet if they succeed, they leave a legacy of progress, which is far more satisfying than just maintaining the status quo.

Courage comes in many forms. It starts from inside, asking yourself if you are courageous enough. It requires you to put yourself out there, to be comfortable with being uncomfortable, grasping difficult issues, confronting things directly, grasping the “elephant in the room”, and seeking higher standards

Whilst courage requires boldness and energy, it also demands empathy and humility. Listening carefully to others, revealing your vulnerabilities, saying you don’t know if you don’t, delegating and giving credit to others, standing behind people in moments of failure, admitting mistakes and changing direction when needed.

Consider the three types of courage required of leaders in the workplace:

Courageous leaders set the stage for others to follow, to accelerate progress.

Courage is about leaders having the confidence to stand naked in front of their people, and to declare that they all need to do better, says Brene Brown in “Dare to Lead.”

Brown says that the biggest barrier to being a courageous leader is not fear. Everyone is afraid of change, complexity and uncertainty. The question is how we address fear – do we put up our shields in defence, or do we step forwards to tackle it?

She says that, for many leaders, their defensiveness limits their courage. They become more concerned about image than action, about being right, than making things better.

Brown describes four ways in which we can grow our courage

Yet the future fills many of us with trepidation. It’s the unknown, and we don’t like not knowing. 54% of CEOs said that the uncertainty was their single greatest obstacle to creating the future, in a recent survey by EY, while IBM found only 41% of organisations believed they had the leaders to execute business strategy in today’s uncertain world.

We need to embrace uncertainty, and the opportunities it offers. We have grown to depend on precise knowledge, and detailed analytics based on the past. We prefer to make decisions based on certainty, to minimise risks and to maximise efficiency. When we are faced with incomplete information, high uncertain and therefore much higher risk, it is easy to feel paralysed. What can you do?

The CEO Genome is a research project by Elena Botelho and Kim Powell, seeking to understand the common attributes of leaders. They found that much of what people assume to be the route to leadership, is actually wrong in today’s world.

Whilst we might think of leaders as the most ambitious in our team, over 70% of CEOs never had designs on the top job until much later in their careers. And whilst an elite education used to get you places, only 7% of leaders went to top-tier universities, 8% didn’t seek any higher education at all.

Dare to be more

Leadership demands confidence and conviction. As a leader you suddenly have a constant stream of decisions coming at you, some strategic, many tactical. Whilst delegation is an essential tool, for many questions, the buck stops with you. You need to be decisive. You need to be reliable. You need to be adaptive. And you need to be bold.

Whilst many leaders can speak eloquently, can engage with their people, say all the right things about the need to focus on customers, to believe in people, and to drive profitable growth, the courageous leader is able to do much more. They have:

Leaders can always take the path of least resistance, they can maintain the status quo and not rock the boat, they can avoid addressing the real problems and instead seek temporary solutions, they can seek only small changes and avoid strategic risks, they can play politics and blame others, and seek to see out their term with the promise of a good pension. Or they can realise that in a world of relentless change, this will simply lead to quiet stagnation, to gradual decline, for themselves and their organisations.

Now is the time

Now is the time for leaders to step up – to have the courage to reimagine the future, to drive change and transformation, to take their organisations to a new place. As we emerge from the pandemic, there is no going back to where we were. We need to find a new place, a better place, and shape the future to our advantage.

Now is the time for leaders need to dare to be more – to be bold, brave and brilliant.