The Ministry of Common Sense … Martin Lindstrom on why it’s time to get rid of the red tape in business, to remove the silly rules and recover common sense 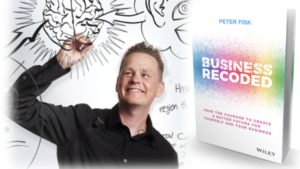 “How come every Zoom call lasts exactly 1 hour no matter how mundane the call is? And why did all the toilet-breaks disappear as Zoom became everyday work life in our bedrooms?”

“Why has a simple action like buying office equipment turned into a 6-people-committee decision followed by a 5-level approval process?”

It’s time to get rid of the wasted time red tape, to remove the silly rules and recover common sense to serve our customers better,  says Martin Lindstrom, aka the Lego kid.

Growing up in Denmark, he was so obsessed with the brick-building brand that he made himself a bed out of it. A few years later, Lego made him their youngest employee, recognising that they needed to get to know their most fanatical customers better. How can smart-suited and profit-seeking executives really understand what kids want?

Over more recent years he has written some fabulous books – from BrandChild to BrandSense, and more recently the fabulously named Buyology and Small Data – he has focused on bringing a passionate customer perspective to the challenges of brand building, strategic marketing and business growth.

Now he goes a step further as he seeks to “reposition” himself as a cultural transformation guru, with a message for the whole business, not just marketers. Of course, that’s all part of his message. We all need to work together. Customers aren’t just here to engage with your marketing, they are the whole purpose of your business. You could say everyone is a marketer, or you could just say it’s just common sense.

That’s why his new book is a rant against the complex and crazy bureaucracies that stop companies doing the obvious, the red tape that ties-up customers and employees in knots, the bullshit that gets in the way of doing what matters, what’s useful, and what works.

Welcome to “The Ministry Of Common Sense“.

Of course, because it’s Martin (who I have known as a fellow author and speaker for almost 20 years), this is not a boring business book (although his publisher did strike out his use of the full BS word!). Instead this is a book packed with crazy anecdotes from his personal travels around the world.

“No scissors. No knife. No fingernails. No teeth. I’m about to be at 30,000 feet with no way to open and remove my new headphones from its heavy plastic package.”

“There I was with my new $400 headphones mocking me through a hard plastic bubble, daring me to attempt prizing it open. I took the challenge, hoping for an easy victory as my flight had already been called and time was running out. An epic common sense fail!”

Looks like you need to call in the Ministry, which comes with three big ideas:

He’s also a master of his own marketing. Now based in Australia, he has swapped his Lego for more expensive pop art, but retains a love of dressing in black, with an infectious smile and passion.

I particular love his story of how his book came about. The challenges of Covid-19, but also a tale of red tape in the world of publishing too. A little story every book publisher (who he calls “wonderful people in bureaucratic straitjackets”) should read:

“The time was 5pm, and I had one hour left to meet the deadline for my next big book.

Don’t be mistaken, this wasn’t my first deadline. Not that I’d missed the first deadline. In fact, I’d already delivered the manuscript, had it all signed off, witnessed the legal folks scrutinise every line, had the book typeset, and waited while 50,000 copies went through the printing press. Then Covid-19 arrived.

Writing a timely book is a delicate balancing act – unless the book itself creates the news. The publishing machine swallows nearly a full year, not to mention the time required to write the book. As a result, any brilliant thoughts you may have come up with face the risk of losing relevance and brilliance as the world, in the meantime, decides to move on.

I found myself stuck between a great idea and the biggest pandemic since 1918, with thousands of cartons of books in a large warehouse outside New York City (or so I thought).

In early March, as the first wave of Covid paralysed the world, I found myself on back-to-back calls with journalists. I’d planned on discussing my book, but one reporter after another asked me to reflect on the pandemic. I did my best, whilst aware that my book didn’t refer to Covid. Not one single time. In the beginning, I brushed off my book’s neglect of the topic that was on everyone’s mind. I denied it all, then began bargaining with myself. “No one will notice,” I told myself. Then a severe depression kicked in, somewhat resembling the five stages of loss.

After 50 interviews that were supposed to be about the book and turned into conversations about Covid, my only option was to cook up a lie. By early 2020, the publisher still hadn’t sent me a final copy of the new book. Left wondering, I used the excuse of needing a copy for a press photograph. I shot my editor an email asking for a copy. Not that I actually had a press photograph scheduled. We were all in lock-down mode, so no one had photos on our schedules. At first my email was greeted with silence. Then, some weeks later, I received a note saying, “We’ll look into it.”

A few months later came an apologetic note. The book hadn’t been printed after all. My lucky day, I remember thinking. I sent the editor an email: “Let me rewrite the entire book.” The response: more silence. Lots and lots of silence, for a very long time. Then, in August, good news  and some less than good news arrived. “Please rewrite the book – and do it in two weeks.” I suppose this was to be expected. A couple months of pondering, followed by a do-it-now deadline. I wondered why no one at the publisher had spotted this opportunity on their own.

But I suppose I shouldn’t have been surprised. Common sense and publishing mix like oil and water.

Don’t get me wrong. I love books, bookstores, and the many wonderful publishing people I’ve dealt with since writing my first book some 20 years ago. With seven titles, 60 languages, and a few lucky New York Times bestsellers, I’ve had hundreds of interactions with the industry over the years. And, frankly, what I’ve encountered is a lot of wonderful people stuck in a bureaucratic straitjacket.

Did I write “oil and water’? Ironically, my day-to-day job is to help the largest companies adapt to change.

You can imagine my frustration when legal asked me to delete a less-than-flattering reference to a hotel. “Legal won’t carry the risk,” I was told.

“Risk?” I replied. “What’s the difference between me ranting on TripAdvisor or in a book, if I have it source-checked and backed with evidence?”

Or how about my story about “one of the big-five credit card companies” completely messing up a customer interaction? “You can’t write, ‘one of the big five’,” legal told me. “Please change the sentence to ‘a credit card company’.” So you think Company X will sue me because they think they’re one of the five biggest in the world? As I exchanged multiple messages with legal, I recall writing, “I suggest your lawyer read the book a couple of times and get acquainted with the actual content.”

One thing I haven’t mentioned: the title of the book is The Ministry of Common Sense: How To Eliminate Bureaucratic Red Tape, Bad Excuses, and Corporate BS.

If you wonder why I ended up with “BS” in the book’s subtitle, I can only say: pick your battles. One of my publishers informed me that booksellers might be upset and not sell the book at all if it featured the letters in that word between the B and the T. “But what about the international bestseller The No Asshole Rule?” I asked. Robert Sutton got away with that title. He even blurbed my book, and his quote on my book jacket includes – you guessed it – the word “asshole”.

Sometimes I think of the publishing industry as a foreign object, landed on Earth from a distant planet called Gutenberg. I guess that’s somewhat ironic, as the very same industry commissioned me to write The Ministry of Common Sense.

Change has never been this fast – and it will never be this slow again.

News breaks across the globe within minutes. Glued to our little screens, we label anything older than a day “old news”. The president of one of my clients, Lowes Foods, recently said to me, “Those who go through Covid without completely changing didn’t get the message.” Some industries have used the pandemic as their opportunity to reinvent themselves, and other industries have completely derailed.

I will be forever grateful that my publishers, along the way, were willing to remove the straitjacket. Talking with them today, after we’ve shared the rewrite, I know they are, too. Please, dear publishing industry, please don’t put that straitjacket back on once the world has turned normal again.”