Rocket scientists imagine the unimaginable and solve the unsolvable. They know that the rules aren’t set in stone, the default can be altered, and a new path can be forged. 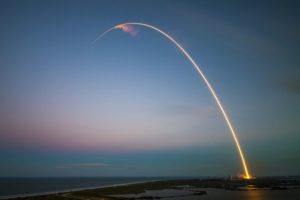 The engineers and scientists at NASA’s Jet Propulsion Laboratory have a strange tradition. At crucial moments in every space mission, they chomp on peanuts. This phenomenon began when a Ranger spacecraft successfully launched after a long run of failures. An engineer had brought a bag of peanuts into mission control that day. Since then, peanuts are eaten at every launch to ward off bad luck.

This shows that even the most scientific among us fear uncertainty. That’s why we engage in strange rituals – like eating peanuts or wearing our lucky jeans – to regain a sense of control. We can’t help feeling this way. Fear of the unknown helped keep our ancestors safe from saber-toothed tigers. But when we avoid uncertainty altogether, we close ourselves off to new possibilities.

Changing your attitude towards uncertainty opens you up to discovery.

Scientists don’t see uncertainty as something to fear. When faced with a dark, shadow-filled room, they don’t turn away like most of us. They poke around in it until they find a light switch. Once that light’s on, they can evaluate what they’ve found. There might be something curious in the room, or there may be another door leading to yet another mystery.

Elon Musk had just cashed out of PayPal with a $165 million personal fortune, so does he retire to the beach sipping drinks all day by the pool? Nope. He decides the time is right to pursue his passion project — building a colony on Mars so humans will become an interplanetary species. So Elon goes to some American rocket companies and finds out rockets will cost $130 million each just for the launch alone. Suffering from sticker shock, he thinks “I’m sure the Russians can do it cheaper than that!” and heads off to Russia. After several trips, the best they offer him are decommissioned intercontinental ballistic missiles for $20 million apiece. Still too expensive.

So Musk borrows some books, fires up a spreadsheet, and starts figuring it out. He soon realizes the materials to build a rocket are only about 2 percent of the cost of a rocket, which seems like a crazy ratio to him. So the way ahead is obviously to start your own company and build the rockets in-house. That’s how SpaceX came into existence, and ultimately became the first privately owned company in history to put a rocket into orbit. It’s also the perfect example of reasoning from first principles rather than accepting the status quo.

Ozan Varol moved to the United States from Turkey at age 17 to attend Cornell University and study astrophysics. He served on the operations team for the 2003 Mars Exploration Rovers projects which successfully sent two rovers to Mars. He then went to the University of Iowa law school, graduated first in his class, and became a law professor at Lewis & Clark Law School. Now he has written a book about rocket science for business: Think Like a Rocket Scientist: Simple Strategies You Can Use to Make Giant Leaps in Work and Life.

The big idea of rocket science

When President John F. Kennedy pledged in 1962 that America would land a man on the Moon and return him safely to the Earth, he noted that achieving this would require a rocket “made of new alloys, some of which have not yet been invented, capable of standing heat and stresses several times more than have ever been experienced, fitted together with a precision better than the finest watch, sent on an untried mission, to an unknown celestial body”.

In other words, to meet the national goal, the country was relying on rocket scientists to figure out how to get the job done. And notably, the 1960s were an era where computers had only just been invented, and had not yet moved from the lab to the desktop.

So how did they achieve that? The race to the moon generated a new set of nine main principles which would later be termed “critical thinking skills” which the rocket scientists used to pull off what seemed impossible. Just like a rocket, these principles can be batched into three stages: 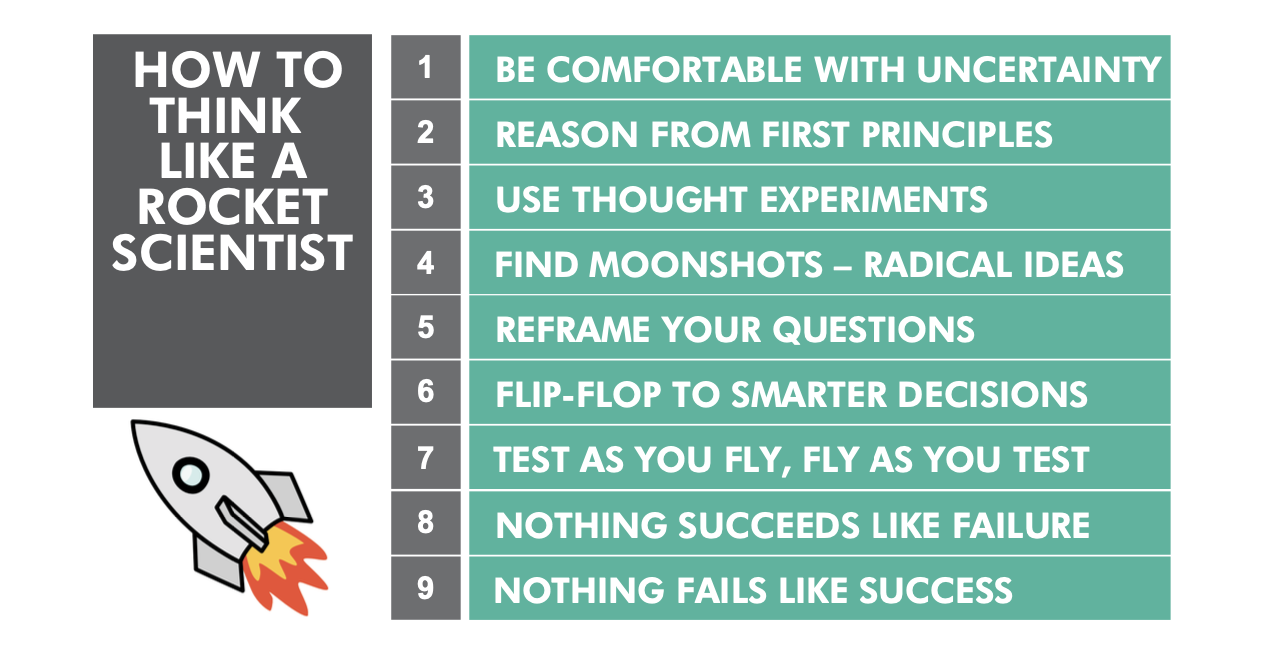 To think like a rocket scientist is to look at the world through a different lens. Rocket scientists imagine the unimaginable and solve the unsolvable. They transform failures into triumphs and constraints into advantages. They view mishaps as solvable puzzles rather than insurmountable roadblocks. They know that the rules aren’t set in stone, the default can be altered, and a new path can be forged.

1st stage — Launch — Principles 1-4. To think like a rocket scientist, you first have to ignite your thinking. This will be a matter of using uncertainty to your advantage, and having the discipline to always reason from first principles. You also need to avoid the status quo’s invisible rules which constrain your thinking, and look for the elegance that comes from subtracting rather than adding all the time. Rocket scientists, businesses, and world-class performers have always used thought experiments and moonshot thinking to come up with original ideas, and you should too.

2nd stage — Accelerate — Principles 5-7. Once you’ve generated some original ideas in the first stage, you then need to propel your ideas forward and see which can stand on their own two feet. The best way to do that is by reframing your questions to open up more possibilities, and by testing and experimenting like a rocket scientist. Astronauts train for years to be able to respond immediately to worst case scenarios and you should take that as a clue for your own success.

3rd stage — Achieve — Principles 8-9. The third and final stage involves learning that unlocking your full potential is always a mix of successes and failures. The world might be in love with the “Fail fast, fail often” mantra but don’t forget the aim is to figure out what works, and then to take full advantage of that. Top performers know uninterrupted success is a warning sign and respond appropriately.

Rocket scientists do most of their thinking in thought experiments, and then test their theories in real-world conditions. They design their tests to reach an object’s breaking point, and find out where it is. Their goal is never to confirm what went right but to identify what went wrong so it can be rectified now, not later. They call this: “Test as you fly, fly as you test” which is principle #7 of 9.

Here’s what the book also explores:

Here are some of the practical worksheets to get started.