Business Recoded … Hamdi Ulukaya, the Kurdish refugee who created the world’s leading yogurt brand Chobani, calls himself an anti-CEO and wants to give it all away 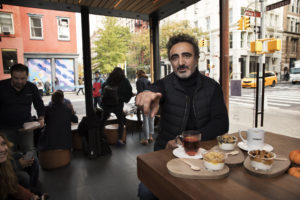 In an exclusive extract from my forthcoming book Business Recoded, meet one of the most inspiring business leaders, shaking up today’s world. He embraces the opportunities of relentless change, the challenge to realign business with society, and the courage to create a better future in his own vision. In the book, I explore the stories of many of the world’s most fascinating leaders right now, and develop 49 codes that help you redefine the future of your business, and yourself.

The Leadership Code of Hamdi Ulukaya

The Turkish-born Greek-style yogurt maker prioritises people over profits, believes in growth through gratitude, and has donated most of his wealth to refugees.

Ulukaya grew up in a Kurdish dairy-farming family in Turkey near to the Euphrates river, where they made cheese and yogurt. They led a semi-nomadic existence, herding their sheep. Ulukaya was actually born on one of the family’s long mountain treks. He left to study political science in Ankara and then emigrated to the USA in 1994, settling in upstate New York, an area which reminded him of eastern Turkey.

He studied English, and then business, while continuing to make traditional feta cheese in his kitchen, to earn some money. With a loan from the US Small Business Administration, he bought an old yogurt plant in 2005 and developed a recipe inspired by his Kurdish heritage. Two years later he started selling yogurt, under his brand name Chobani, derived from the Turkish word çoban meaning shepherd.

Within 5 years, Chobani was a billion-dollar business, riding on a wave of interest in protein-rich, low-fat yogurt. At the same time Greek-type yogurt grew from 1 to 50% share of the US yogurt sector. EY recognised him as their Entrepreneur of the Year in 2013, his personal fortune grew rapidly to over $2 billion, and Chobani is now the top selling strained yogurt brand in America.

However Ulukaya calls himself the “anti-CEO” because he dislikes many aspects of capitalism, particularly the notion of maximising value for shareholders (“the dumbest idea I have ever heard”). He hasn’t forgotten his humble roots, and has continually spoken about the rising inequalities in our world, blaming business for the suffering of the poor. He argues that too many of his fellow leaders blindly follow a “broken playbook”, calling for leaders to be more “noble”, to make more personal and financial sacrifices.

In an interview, he said “business people should promote a sense of purpose in their corporate culture to create a climate of positive change in business and the world. He stated that companies should focus on humanity and not just on their bottom lines. “Business is still the strongest, most effective way to change the world.”

© Peter Fisk 2020. Business Recoded will be published in December 2020. Order your copy now.