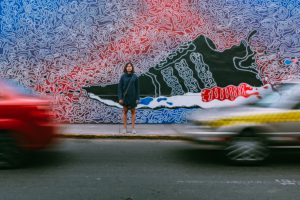 In a pandemic, a downturn, or even in the best of times … markets are crowded with brands clamouring to engage consumers, to find an edge, to stand out … In downturns they get more desperate, more creative, and innovation thrives.

The temptation, of course, is to simply seek to shout louder. Traditional brands and lazy marketers still seek to measure share of voice, share of awareness, as if shouting louder at somebody magically unlocks love and desire.

But in a world where traditional models of pushing messages at people through advertising have dramatically declined, marketers are far more focused on more digital, more focused, more personal ways of engaging people. Today it’s about connecting with the consumer’s world, their agendas.

The best marketers have gained the courage to step, to use their incredible platforms, and express their points of view, seeking to address big issues, and make society better.

Of course it’s not just about communication. You could even argue that most brand communication is beyond the brand itself these days, more about the interactions between people on social platforms. But its also about every other aspect of marketing, or lets call it brand, mix. From products and services to design and packaging, from channels and pricing, to business models and experiences, from context and influence to immersion and impact.

So who are the most interesting brand marketers around right now?

The three-striped brand has a fanatical base. In mid-2019 it decided to experiment in incorporating them into the company’s sales funnel with a new partnership with the social commerce app Storr. The arrangement gives people the ability to open their own sneaker store from their phone in just three clicks. First opened up to the brand’s 10,000 Creators Club members, who could earn a 6% commission from every sale (or have the option to donate to Girls on the Run), the plan was then to expand social selling into the brand’s higher-end women’s products

Ryan Reynolds has managed to raise the profile of Aviation Gin among drinkers while also placing the brand comfortably in pop culture. Part of that is sheer celebrity, but the work itself has also been the envy of every marketer and ad agency. Using meta-advertising to pitch Aviation, Samsung, and a Netflix film—all at once—was impressive, but it was how the brand managed to find and hire the Peloton Wife for an ad while the viral flames around the exercise brand were still burning that really had everyone buzzing.

The sustainably-minded outdoors brand has been making compelling content and lobbying for years, and this last one was no exception. To raise awareness for Climate Week back in September 2019, the brand created a new campaign featuring teen activists from around America and the world, telling Congress and other leaders that there is no room in government for climate change deniers. By early 2020, the brand had released two new films, the first a feature documentary called Public Trust, about America’s system of public lands and the fight to protect them. The second was a compelling short called District 15, outlining the fight by young activists in the L.A. neighborhood of Wilmington to establish a 2,500-foot distance between oil drilling operations and the community’s schools, hospitals, and churches.

The world’s biggest advertiser turns to podcasts and documentaries

The consumer goods giant has used its size and influence to push the boundaries of what high-quality brand content could—and should—be. In mid-2019, it announced Activate, a six-part documentary series on National Geographic Channel, featuring celebrities such as music producer Pharrell Williams, rapper Common, and actors Darren Criss and Uzo Aduba, on issues like the work of grassroots activists ending cash bail, eradicating plastic pollution, and more. Then in November 2019, building on the momentum from award-winning short film work like 2017’s “The Talk” and 2018’s “The Look,” the company teamed with Spotify for a four-part branded podcast called Harmonize, on racial bias starring John Legend and Pusha T, along with cultural commentator Cory Townes, and hosted by writer Jamilah Lemieux.

Getting other brands to hype its shows like Stranger Things

The third season of Stranger Things was a massive event for Netflix, and even though the streamer has no advertising on its platform, it turned the occasion into a blockbuster movie-style brandfest. The best part about it—across partners like Coke, Nike, Baskin-Robbins, Lego, and many more—was that each execution fit the tone, personality, and content of the show. The crown jewel? Convincing Coca-Cola to relive its New Coke disaster and turn it into a marketing masterstroke.

Hard seltzer, spiked seltzer or hard sparkling water is a type of highball drink containing carbonated water, alcohol, and often fruit flavoring. 5% alcohol, just 100 calories. In the US the alcohol is usually made by fermenting cane sugar; sometimes malted barley is used. Overall, the hard-seltzer market exploded last year, with a 202% sales boost over 2018 and hitting $1.3 billion. Mark Anthony Brands’ White Claw led the way. It rode the wave of this rise with both a design and marketing approach that was appealing to men, women, and memes, making the most of events like the Kentucky Derby, while embracing influencers and even unauthorised parodies.

Addressing racism in the US, Nike for once, says Don’t Do It