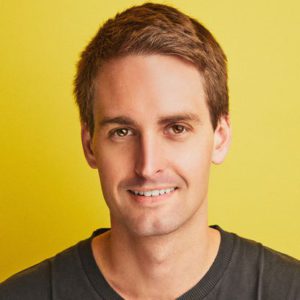 In an exclusive extract from my forthcoming book Business Recoded, meet one of the most inspiring business leaders, shaking up today’s world. He embraces the opportunities of relentless change, the power of disruptive technologies, and the courage to create a better future in his own vision. In the book, I explore the stories of many of the world’s most fascinating leaders right now, and develop 49 codes that help you redefine the future of your business, and yourself.

The Leadership Code of Evan Spiegel

Evan Spiegel sits in his loft-sized office, taking up the top floor of Snap Inc’s head office in Santa Monica. On the beach outside, young people chat and surf, sunbath and play. Inside, his Snapchat platform enables those same teens and young twenty-somethings to stay connected day and night. Spiegel is one of the them, still in his twenties, but also a multi-billionaire tech entrepreneur founder of Fast Company’s “world’s most innovative company” of 2020.

A little like his hero Steve Jobs, Spiegel studied design at art college, followed by an internship at Red Bull, which taught him much about consumer culture. At Stanford he launched a start-up with classmate Bobby Murphy, initially called Picaboo, which evolved into Snapchat in 2011. He dropped out of college when the app reached 1 million daily users a year later. In 2014 Mark Zuckerberg offered him $2 billion for the business, which he turned down, instead choosing an IPO in 2017, which valued the business at $30 billion.

Then everything went wrong. Spiegel rapidly grew his team to thousands, putting himself at the heart of all technology development, yet Snapchat was haemorrhaging users, losing 5 million in 2018, and losing most of his senior team. The stock price dived by 90% and most people thought it was all over.  However, Spiegel wasn’t finished, knowing that he needed to fix his business, and his internal workstyle. With Murphy he reimagined the app around what consumers liked. He invested heavily in Augmented Reality (AR) tools, and also added crazy rabbit ears to photos, which might sound like a gimmick, but were loved by his young audience.

Apple and Alphabet see the future of the smartphone eventually migrated to some form of headset device, but Snap is focused on its cheap and fun Spectacles, cool designs with built in AR cameras.

The team drove for new types of content, developing a Netflix-style platformfor short 5 minute movies with teen-specific content, and a second app called Bitmoji which allows users to make Simpsons-like caricatures of themselves, and then placing your avatar into animated movies alongside your friends, in Bitmoji TV.

What emerged was a very human approach to technology. While many older audiences might trivialise those rabbit ears, Spiegel knew they could make his technology business cool, desirable and incredibly human.

In recent months, Snap has responded to the Covid-19 lockdown by providing new types of support to users, including a teen-focused mental health app “Here for you” with videos on how to cope with stress and anxiety, and how to support others. Last month Spiegel also formed a partnership with Headspace, creating a series of “mini” meditation apps.

Making technology “more human” will be a key step to progress in forthcoming years. This could be like Pokémon Go embracing augmented reality in gaming or using gaming itself to transform activities such as shopping, like Alibaba’s gamified incentives to attract shoppers its 11:11 Shopping Festival, or Kahoot making education more fun.