Singapore technology, Danish sustainability, Swiss finance … Small countries have become the most competitive in a world of uncertainty and relentless change 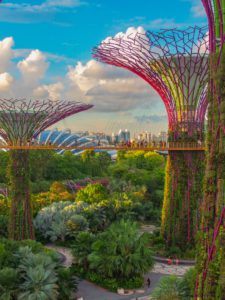 IMD’s annual World Competitiveness Ranking is now in its 32nd year, and showcases a wealth of data on the performance of national economies around the world.

In 2020, Singapore has again ranked top, followed this year by Denmark, Switzerland, the Netherlands and Hong Kong.

Small countries, particularly in times of economic challenge, seem to be the best places to do business.  Arturo Bris from IMD’s World Competitiveness Centre says, “the benefit of small economies in the current crisis comes from their ability to fight a pandemic and from their economic competitiveness. In part these may be fed by the fact it is easy to find social consensus.” 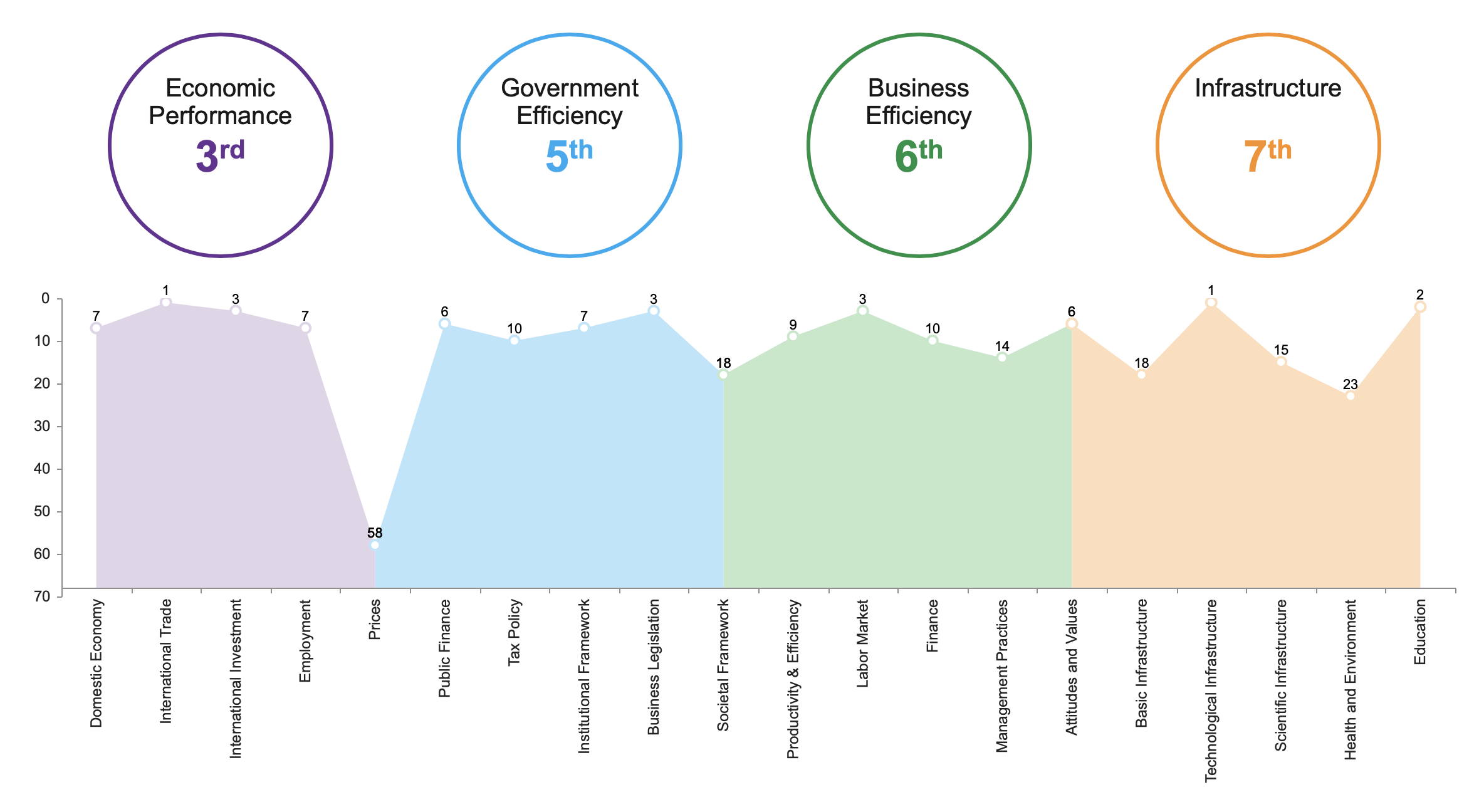 The Danes rose from 6th to 2nd place due to a strong economy, labour market, and health and education systems. In addition, the country performs very well in international investment and productivity, and topped Europe in business efficiency. Denmark had a good pandemic too, led in a collaborative way by female PM, Mette Frederiksen. 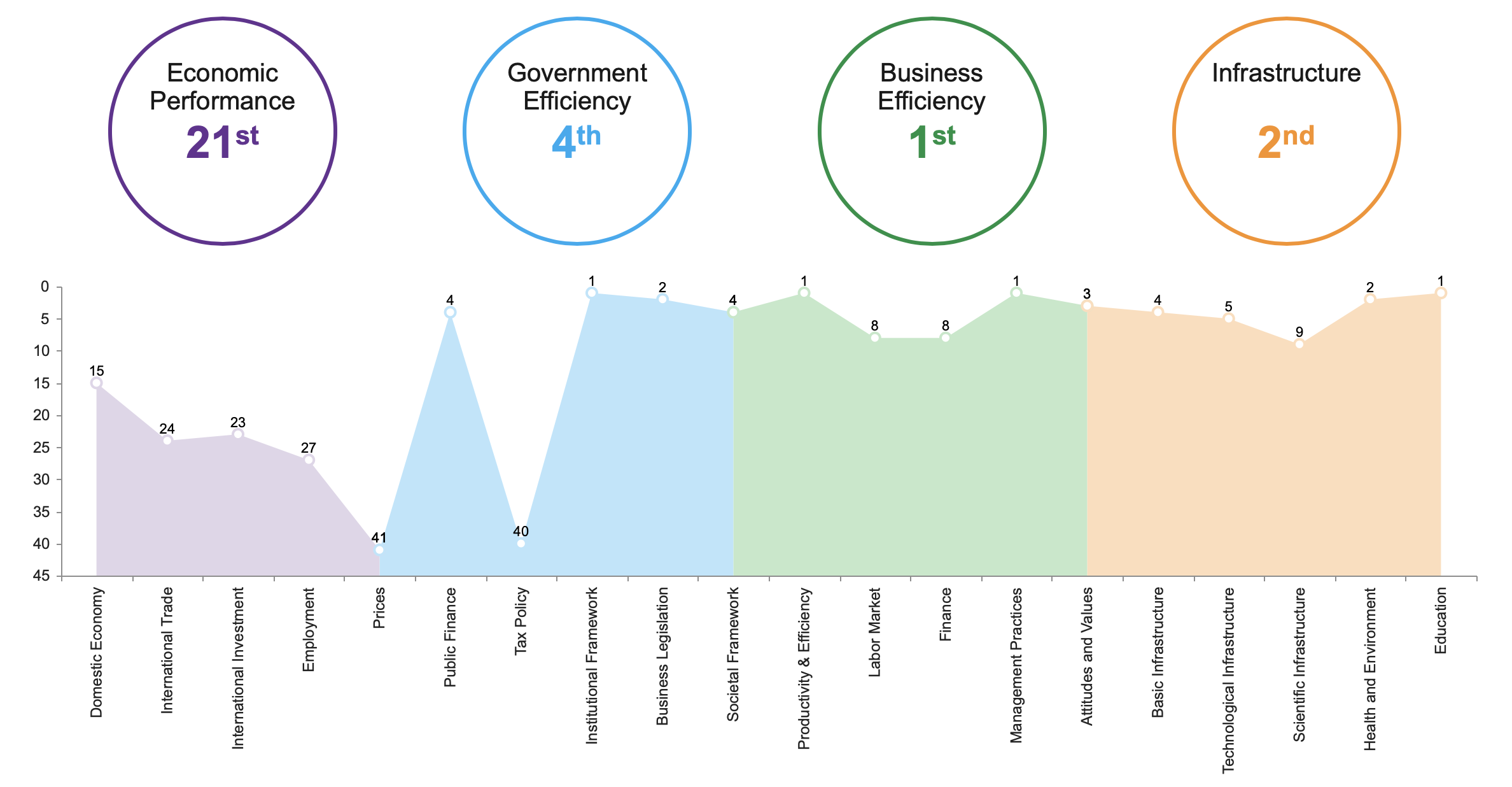 The Swiss, better known for efficiency, have been gradually edging up too, from 5 to 4 and now 3rd place. Robust international trade fuels its strong economic performance, whilst its scientific infrastructure and health and education systems show consistently strong displays. 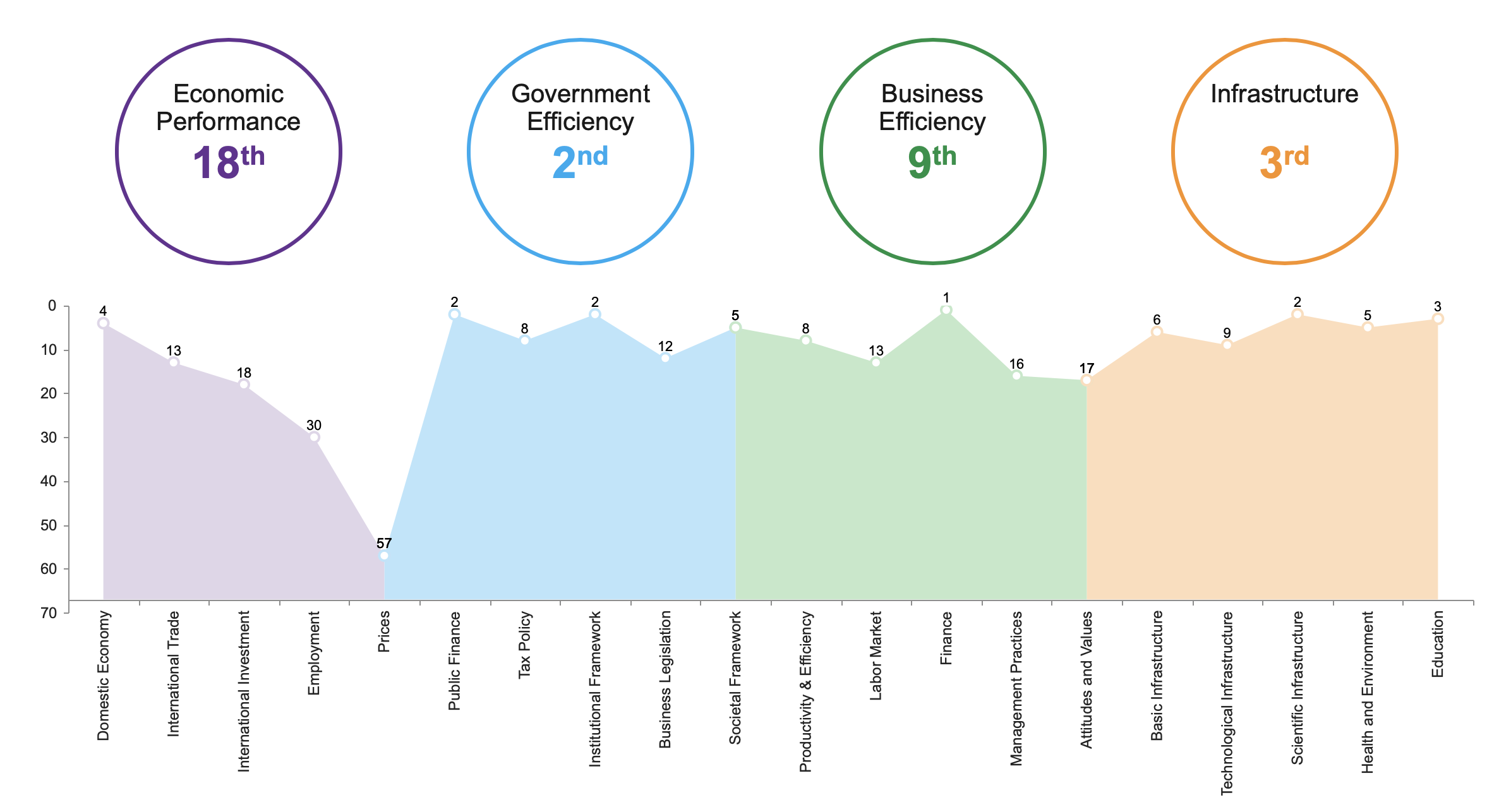 Comparing the top three markets, it seems that they have many similarities – partly driven by the small size – although they offer differ somewhat in their democratic structures, and the influence of social priorities.

The comparison graph below shows how Singapore clearly leads in terms of International Trade and Investment, partly due to its geographical positioning within there relatively booming Asian markets, but also because of the government-backed investment funds like Tamasek. Denmark, however lags well behind on tax policy, largely due to its social priorities, and its lack of international trade. Generally, however all three leaders gain their rank through consistency across many factors.

For the second year, the USA failed to fight back having been toppled from its number one spot last year by Singapore, and coming in at 10th (3rd in 2019). Trade wars have damaged both China and the USA’s economies, reversing their positive growth trajectories. China this year dropped to 20th position from 14th last year.

While Hong Kong came 5th, this is a far cry from 2nd which it enjoyed last year. The decline can be attributed to a decline in its economic performance, social turmoil in Hong Kong as well as the rub-on effect of the Chinese economy. However, the 2020 rankings do not pick up on events in from the last couple of months.

The UAE also falls from 5th to 9th. The Middle East struggled as a region, reflecting the oil crisis.

Norway made this year’s top ten, at 7th, having been 11th last year. This is partly due to a wider pattern in the region: all the Nordic economies experienced a noteworthy improvement in business efficiency. In fact, they all made the top ten in this measure.

The UK climbed from 23rd to 19th, while France (32nd) slightly lost its 2019 foothold on 31st. One interpretation is that Brexit may have created the sentiment of a business-friendly environment in the making. The UK ranked 20th on the business efficiency measure, compared to 31st least year.

Canada moved up to 8th from 13th.  This rise is centered around improvements in measures related to its labor market and in the openness of its society. It led the North American sub-region.

In Latin America, a distrust of institutions may be reflected by minimal changes. Chile (38th) remains the highest-ranked country in the sub-region and Venezuela the lowest.

This year, new criteria were added to reflect the importance of achieving the UN Sustainable Development Goals. The criteria provide a perception of where the economy stands with respect to different sustainable goals that need to be satisfied in 10 years, such as education and the environment, inclusion and empowerment, ageing and health. Indeed, an important component of the competitiveness study is to align the criteria employed with the important challenges and concerns of the world economy.

This is a key reason why Denmark has performed so well. In the recent ranking of  World’s Most Sustainable Companies 2020 by Corporate Knights, three Danish companies featured in the world’s top 10. Orsted, the energy company that has transformed from “black to green” in a decade tops the chart, while fellow Danes Christian Hansen and Novozymes follow in 2nd and 7th.

The Danish focus on sustainability is exemplified by the Copenhagen Letter, a manifesto launched in 2017 calling for technology to put humans ahead of business, or better still to do business, and make the world better at the same time.