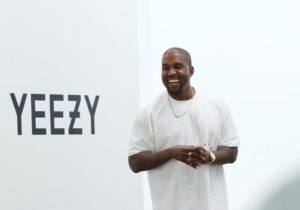 He released his debut album The College Dropout in 2004, his second album Late Registration in 2005, and his third album Graduation in 2007. His first three albums have received numerous awards, critical acclaim, and commercial success. He also runs his own record label GOOD Music.

West grabbed the fashion world’s attention when he debuted sneakers designed in collaboration with Nike in 2009. Retailing at over $200, the shoes were released in extremely limited quantities and sold out instantaneously. He then switched to Adidas as his partner. They now resell in the thousands of dollars.

You are unlikely to miss West.

His matte-black Lamborghini SUV rumbles up his gated driveway on the outskirts of Los Angeles like an earthquake, and when he steps out, in a white T-shirt and dark sweats, the obsessiveness kicks in immediately.

First, there’s the house: The lushly landscaped exterior of the property he shares with his wife, Kim Kardashian West, and their four children (North, Saint, Chicago and Psalm) serves as stark contrast to the unadorned alabaster walls within. Nearly every surface is a monastic shade of white. The floors are made of a special Belgian plaster; if scuffed, the delicate material can be repaired only by a crew flown in from Europe. “The house was all him,” Kardashian West later tells me. “I’ve never seen anyone that pays such attention to detail.”

West is now a billionaire.

Over the years, his finances have remained mostly a mystery. However Forbes recently reported that the rapper-turned-footwear mogul has an estimated net worth of $1.3 billion. West can attribute most of his fortune to his lucrative sneaker company, Yeezy. The sneaker brand — which is now produced, marketed and distributed by Adidas — was on track to $1.3 billion in footwear revenue in 2019, according to Bloomberg.

While the bulk of West’s income is generated from Yeezy, the rapper also possesses about $200 million in other assets, including real estate properties and his music catalog. Bloomberg reports that his music catalogue — which includes everything from the albums The College Dropout to Jesus Is King — is worth about $110.5 million, according to a valuation by the Valentiam Group.

In true West fashion, soon after Forbes published its story proclaiming him a billionaire, the rapper argued that he’s actually worth more than that. “It’s not a billion,” West texted to Forbes. “It’s $3.3 billion since no one at Forbes knows how to count.” West’s personal accountant, David Choi, provided an unaudited balance sheet to Bloomberg, claiming the rapper’s net worth to be $3.15 billion.

Indeed, West has come a long way since claiming to be $53 million in debt just four years ago. In February 2016, after revealing his financial woes on Twitter, the rapper also used the social media platform to personally ask Facebook founder and CEO Mark Zuckerberg to invest $1 billion in his work.

“I write this to you my brothers while still 53 million dollars in personal debt… Please pray we overcome… This is my true heart…,” West tweeted at the time. “Mark Zuckerberg invest 1 billion dollars into Kanye West ideas … after realizing he is the greatest living artist and greatest artist of all time.”