100 pairs of the same running shoes … the Nike Pegasus has remained the workhorse of victory, launched in 1983, it is the all-time best-selling running shoe. 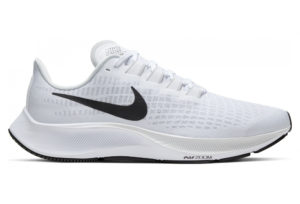 Today I bought my 100th pair of Nike Pegasus running shoes. Now in its 37th design generation, the Pegasus model has come a long way, and endures at the heart of the Nike range. I’ve been running for over 40 years now,  incredibly (but of course I don’t feel that old because I’m a runner!), and I’ve stayed loyal to this shoe in all that time, though its many design interpretations.

I bought my first pair of Pegasus in 1983. I actually remember the day. Living in the north east of England, I was immersed in a region of great running heritage. As a 9 year old, I had started running with a pair of Nike Wally Waffles, a kids version of the early waffle trainer, and inspired by the recently retired Brendan Foster, who had brought the Nike brand to England.

By 1983, when I was 16 and winning north of England 1500m championships myself, the global force in athletics was another Tyneside athlete, Steve Cram. 1983 was a big year for Cram, winning the World Championships 1500m, and stepping up to superstardom. Nike had latched onto Cram, like they had years earlier with Michael Jordan, creating a Cram range of clothing and shoes in his distinctive black and yellow colour scheme. And Pegasus shoes too.

Every shoe brand creates a wide range of shoes, from cheaper to expensive, with a wide range of applications (indeed in the last 12 months I have bought a pair of Pegasus Turbo for fast workouts, and Pegasus Trail for the mountains). But Pegasus has always been a mid-range shoe – you can train in, and race in – not cheap, but it’s not expensive either (actually less that half the price of Nike’s most premium shoes, like the AlphaFlys, of Kipchoge marathon fame).

These days I live in Teddington, just outside London, a town full of runners who cross paths on their daily runs in the nearby royal parks, Bushy and Richmond, and along the River Thames. It’s home to four times Olympic champion Mo Farah too, another Nike sponsored athlete. Of course, he could have any running shoe he wanted, and even gets them customised with his name and logo. But look closely, and you will see that he also most often chooses the Pegasus to churn out the miles.

I’m never quite sure when brands update a trusted model. Will the next version be as good as this one, can it be, do they really need to change it? So when Nike said the Pegasus 37 was coming soon, I quickly bought up some remaining 36’s, just in case. And now the 37 is here. I needn’t have worried, the Pegasus has evolved, but always stayed true to itself, and each version has always been a step forwards.

Oh, and here is how Nike remembers it’s most enduring shoe too.

Nike introduced the Pegasus, intended to be the shoe for every runner, in 1983. It was designed to be half air (similar to the winged half-horse it was named after) to represent movement, quickness and the allure of flying. In its 35 years of life, it has undergone major technology shifts and supported training efforts of countless everyday runners and even some of the world’s best distance runners. But it wasn’t always Nike’s golden running shoe:

2. NIKE, Inc. Chairman, President and CEO, Mark Parker, was part of the team credited with making the first Peg. At the time, he was the manager of advanced product designs and the director of design concepts and engineering.

3. The Pegasus was the first shoe to feature an Air Wedge, a heel-only Air unit that, according to an October 1982 Nike catalog, “improves shock absorption by 12 percent over an EVA wedge” (which it replaced). In fact, it’s why the shoe was originally called the Air Wedge Trainer.

6. NIKE, Inc. founder, Phil Knight, may be wearing a Pegasus (in black) right now. He’s been spotted in Peg at black-tie events, public speaking appearances and between meetings at Nike’s World Campus in Beaverton, Oregon.

7. The franchise was temporarily dropped from the line in 1997. In 1998, it was renamed the Arma, and the technology (essentially) remained in the line. It made its official return to the line in 2000 as the Air Pegasus 2000, which was designed by Air Max Plus designer Sean McDowell as part of the newly created Bowerman Series (a collection dedicated to making consistent, dependable footwear for runners by runners).

8. In 2004 and for the first time in Pegasus history, the women’s version was adapted specifically for the anatomy of the female foot. The women’s saddle was made more “curvaceous,” and the medial support was increased. It wasn’t until 2006 that it became completely gender specific. And for 2018, if offers responsive Cushlon foam specifically tuned for women for the first time.

10. The 2018 Peg takes inspiration from the Zoom Vaporfly 4%, and for the first time offers a full-length articulated Zoom Airbag. (To prove an Airbag could be curved similarly to the way the 4%’s carbon-fibre plate was, the designer heated an Airbag in his microwave then wrapped it around a beer mug).