Adidas seeks to recode running … as carbon changes the game, Adidas turns to the simplicity of lightness and speed 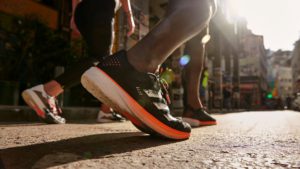 Running: it’s not what you think it is.

In 1934 a young woman named Florence Illot surpassed expectations and defied social norms by taking on a challenge and running across a famous bridge in London.

This film celebrates the way Florence ‘gave it a go’ and explores five other women’s relationships with running in London today and how it has become an integral part of all their lives. We are taken on a journey of how these women have re-coded what running really means to them, both individually and as a collective, before we witness them all come together to take on the challenge that Florence set all those years ago. The film is a true collection of the ever-growing London running community, and all it brings to the women who are part of it.

Running is being recoded in real time by runners who are ripping it apart and sticking it back together. Runners who defy convention. Respect tradition. Who believe there is no right way to run, as long as you run.

Running is being recoded by runners who respect tradition, but defy convention. Meet the Trash Runners from Shanghai, a running crew that started making a change by picking up trash in the streets and ended up challenging the whole consumption culture in their community.

Two of the most innovative brands in the universe come together for a new era of innovation in space to empower athletes on Earth. Featuring Kid Cudi, Shaunae Miller-Uibo and Noah Lyles.

In the wake of record-breaking times from runners wearing Nike’s Vaporfly shoes, and new regulations from the sport’s governing body, Adidas and other brands are racing to roll out new carbon-enhanced shoes ahead of the Tokyo Olympics.