Adidas, Google and the FIFA online game have teamed up to create a smart football boot. The technology known as “Adidas GMR”, tracks how people play in real life, allowing them to complete challenges or hit milestones. When they do, they will be rewarded with improvements within FIFA Mobile, allowing them to unlock in-game rewards or improve the performance of their team within FIFA Mobile Ultimate Team.

The technology brings together insoles made for Adidas football boots with Google’s Jacquard technology, which allows smart fabric to be sewn into otherwise normal pieces of clothing. It has already been integrated into backpacks and denim jackets, for instance, allowing wearers to swipe on a sleeve and change the song that is playing on their phone.

The new tie-up with Adidas puts the tag inside of an insole so that it can be placed into any type of footwear. Once it is in, players will be given challenges to complete in the real world. One of the first, for instance, tells players to take 40 powerful shots from within the penalty box to complete the “Master Finisher” achievement, and the power of their shots will be ranked on leaderboards within the game.

The companies say the tag uses machine learning to understand how players are moving around in the real world, while playing on the pitch. It will be able to measure the kicks they take, the power of shots, the distance they run and the speed they do it, the companies claim. The shoes are available to buy through Adidas now for £29.95. They also require the Fifa Mobile app, which is available on Android or iOS. 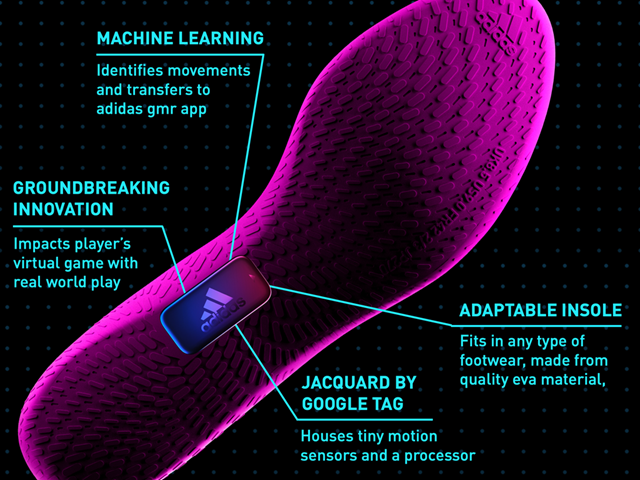 More things happening this month in the world of business and brands: