Metcalfe’s Law explains how the value of networks grows exponentially … exploring the “network effects” of businesses like Apple, Facebook, Trulia and Uber 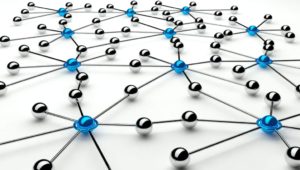 Network effects typically account for 70% of the value of digitally-related companies.

Network effects were popularised by Robert Metcalfe, one of the co-inventors of the Ethernet and a co-founder of 3Com.

3Com created networking cards, that plugged into a computer giving it access to the Ethernet, a local network of shared  resources like printers, storage and the Internet.

“Metcalfe’s Law” says that a network’s value is proportional to the square of the number of nodes in the network. The end nodes can be computers, servers and simply users. For example, if a network has 10 nodes, its inherent value is 100 (10×10=100). Add one more node, and the value is 121. Add another and the value jumps to 144. Non-linear, exponential, growth.

As the network grows, it’s value multiplies. Think of a dating app. Initially a few users is very limiting, but as soon as the network grows, the opportunities to find a suitable match grow much faster. The value of the network to the user is in the number of connections possible, and for the business, the commercial value becomes the data that is generated through user to user interactions. This data can be captured and analysed, to drive more interactions between people, and becomes the real advantage.

Network effects, relationships and data, become the assets of a network-based business. They are “light” assets, typically in the form of intellectual property (compared to primarily heavy assets of linear companies), and drive “intangible” value financially.

There is a downside to network effects, in that exponentially growing networks become harder to control, coordinate or curate. The rise of unsolicited emails, fraudsters and fake news is one obvious consequence. And whilst Facebook and other networks employ huge armies of people to try to eliminate such factors, this is probably an old way of thinking. In reality it needs to leverage network-based solutions, such as peer to peer accreditation, as in the trust profiles which users give each other on platforms such as Airbnb, eBay and Uber.

As a starting point, network effects can be direct or indirect.

Direct (same-side, or symmetric) network effects happen when an increase in users directly creates more utility for all of the users, that is, a better product or service. Facebook, Tinder.

Indirect (cross-side, or assymetric) network effects happen when an increase in users indirectly create more utility for other types of users. Airbnb and Uber, where more hosts and drivers creates more utility for guests and passengers.

Different business models encourage different network effects. Dynamic pricing, for example, is used by Uber to encourage more drivers to join the network when demand is high, or more passengers when demand is low.

Many varieties of network effects emerge, depending on the types of business, each with strengths and weaknesses. NFX define a list of 13 types, where the first 5 of direct effects, the others indirect:

Most iPhone apps rely heavily on the existence of strong network effects. This enables the software to grow in popularity very quickly and spread to a large userbase with very limited marketing needed. The Freemium business model has evolved to take advantage of these network effects by releasing a free version that will not limit the adoption or any users and then charge for “premium” features as the primary source of revenue.

eBay would not be a particularly useful site if auctions were not competitive. As the number of users grows on eBay, auctions grow more competitive, pushing up the prices of bids on items. This makes it more worthwhile to sell on eBay and brings more sellers onto eBay, which drives prices down again as this increases supply, while bringing more people onto eBay because there are more things being sold that people want. Essentially, as the number of users of eBay grows, prices fall and supply increases, and more and more people find the site to be useful.

Stock exchanges feature a network effect. Market liquidity is a major determinant of transaction cost in the sale or purchase of a stock, as a bid–ask spread exists between the price at which a purchase can be done versus the price at which the sale of the same security can be done. As the number of buyers and sellers on an exchange increases, liquidity increases, and transaction costs decrease. This then attracts a larger number of buyers and sellers to the exchange.