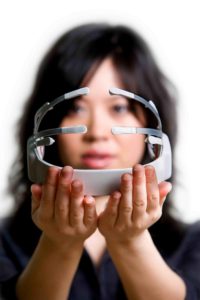 In an exclusive extract from my forthcoming book Business Recoded, meet one of the most inspiring business leaders, shaking up today’s world. She embraces the opportunities of relentless change, the power of disruptive technologies, and the courage to create a better future in their own vision. In the book, I explore the stories of many of the world’s most fascinating leaders right now, and develop 49 codes that help you redefine the future of your business, and yourself.

The Leadership Code of Tan Le

The Vietnamese boat refugee who found a new beginning in Australia, qualifying as a lawyer, then creating Emotiv, a world-leading neurotechnology company.

Tan Le was only 4 years old when she fled Vietnam with her mother and sister, crowded on board a fishing boat with 162 other people, in search of a better life. It was a difficult choice, leaving her father behind and heading out to the uncertain seas.

For 5 days they sailed, and then after losing power, drifted across the South China Sea. She remembers the long dark nights and rough seas, and everyone becoming desperate once food and water ran out.

Fortune came in the shape of a British oil tanker, which offered to rescue them. After 3 months in a refugee camp, the family were offered a flight to Australia. As the plane flew across the unknown country, she was struck by the huge emptiness of the land, and later reflected on it as symbolising the new opportunities which she could never have imagined. On landing, her mother told her to kiss the ground, as this was a special place.

At 8 years old, her mum says she was a dreamer, and particularly liked to pretend she had the power of telepathy, as inspired by a movie she had seen. In reality, she called herself a curious nerd, desperate to work hard and seize her opportunity. At the same time she was very conscious about being different – her looks, her accent, her background.

Then when she was 20, she won Young Australian of the Year for her work in helping other immigrants to settle locally, to learn the English language, and to find jobs. She was astonished that somebody like her could win such an award. It was the moment that really opened her mind.

She started to look beyond her mum’s dream of her becoming a doctor or lawyer. With a degree from Monash University she qualified as a lawyer, but quickly turned her attention to software engineering, exploring how brainwaves can control digital devices.

It was all about understanding the brain in context, and how it could be directed to do more productive work, to engage consumers more deeply with brands, to help people with disabilities. Her early work included the development of EEG (electroencephalography) headsets by which you can control a car, or drone, or game, with your mind.

“When the neurons in your brain interact, they emit electrical impulses, which we can then translate into patterns that become commands, by using machine learning” she explained in a recent interview with CNBC.

She founded Emotiv, a bio-informatics company. It was all about understanding the brain in context, and how it could be directed to do more productive work, to engage consumers more deeply with brands, to help people with disabilities.

Chosen to be part of the World Economic Forum’s Young Business Leaders in 2009, she sat at a dinner held in Buenos Aires with fellow participants. Opposite her sat a wheelchair-bound Brazilian called Rodrigo Hübner Mendes. He introduced himself as a Formula One racing car driver, who used a specially developed brain interface to control the vehicle.

Today Emotiv is a world-leading in brain interface software, with technology that is cheaper than a gaming console, but has the ability to fundamentally disrupt and improve our lives. With offices around the world, Le spends much of her time in Hanoi, where her ground-breaking technology is being developed by young Vietnamese technologists.

Le reflects on her personal journey saying “Like my mum, I took a leap of faith into the world of technology, and particularly into a completely new area for which I had no qualifications or experience.”

She freely admits that she doesn’t have all the answers, with “I try to make the right choices, but you never know exactly where you are going, or if doing your best” but is also an infectious optimism “The future is not hear yet. We have the chance to create it, to co-create it.”

As for Mendes, he recently found himself at a conference in Dubai listening to world champion F1 driver Lewis Hamilton. When it came to questions at the end, Mendes’ hand immediately sprung up. He challenged the world champion to a race, using brainwave controlled cars. Hamilton, a lover of new technologies, accepted. The race awaits.