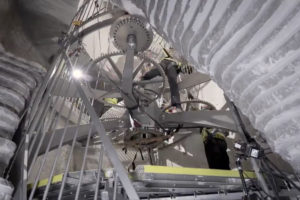 There is a clock ringing deep inside a mountain.

It is a huge clock, hundreds of feet tall, designed to tick for 10,000 years.

Every once in a while the bells play a melody. Each time the chimes ring, it’s a melody that has never been played before. Its chimes have been programmed to not repeat themselves for 10,000 years.

Most times it rings when a visitor has wound it, but the clock hoards energy from a different source and occasionally it will ring itself when no one is around to hear it. It’s anyone’s guess how many beautiful songs will never be heard over its 10 millennial lifespan.

The 10,000 Year Clock is real. It is now being built inside a mountain in western Texas, the project of the Long Now foundation, and funded by Amazon founder Jeff Bezos

The Long Now Foundation itself is the brainchild of inventor and engineer Danny Hillis, who launched the non-profit organisation to build the clock.  The foundation has over 3,300 members who are supporting the project, but Bezos is by far the most prominent and seemingly deep-pocketed, kicking in a projected $42 million, according to a Wired profile of the Clock.

The 10,000  Year Clock is the first of many millennial clocks the designers hope will be built around the world and throughout time. There is a second site for another clock already purchased at the top of a mountain in eastern Nevada, a site surrounded by a very large grove of 5,000-year-old bristlecone pines.

Appropriately, bristlecone pines are among the longest-lived organisms on the planet. The designers of the clock in Texas expect its chimes will keep ringing twice as long as the oldest 5 millennia-old bristlecone pine.

Ten thousand years is about the age of civilization, so a 10,000 Year Clock would measure out a future of civilization equal to its past. That assumes we are in the middle of whatever journey we are on – an implicit statement of optimism.

Another project of Long Now is Long Bets, in which anyone get bet on or predict the future.