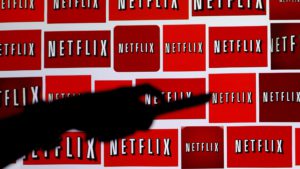 What motivates a business leader to embark on strategic transformation?

To better understand the dynamics of why and how transformation happens, Innosight, one of the world’s leading strategic innovation firms, has evaluated the strategic change efforts of many companies, seeking to identify best practices across industries and geographies. Their ranking is based on three factors: finding new growth (% of revenue beyond core), repositioning the core (giving the legacy business new life), financial growth (revenue, profit and economic value over the transformation).

Innosight partner, Scott Anthony’s excellent book Dual Transformation describes the essence of this kind of transformation: “What businesses are doing here is fundamentally changing in form or substance. A piece, if not the essence, of the old remains, but what emerges is clearly different in material ways. It is a liquid becoming a gas. Lead turning into gold. A caterpillar becoming a butterfly.”

Ørsted, the Danish energy company, is ranked #7, the highest ranked European company on the list. They were recently ranked the world’s most sustainable company, which is not bad given that 10 years ago 95% of its energy came from fossil fuels.

In 2012, then known as DONG, Danish Oil and Natural Gas, it found itself in a financial predicament as global overproduction sent gas prices plunging. S&P downgraded the 6,000-employee firm’s credit rating to negative, raising the cost of its considerable debt. The board hired a former leader of the transformation at Lego, Henrik Poulsen, as the new CEO. Whereas some leaders might have gone into crisis management mode, laying off workers until prices recovered, Poulsen recognised the moment as an opportunity for fundamental change.

“We saw the need to build an entirely new company,” Poulsen says. “It had to be a radical transformation; we needed to build a new core business and find new areas of sustainable growth. We looked at the mandate to combat climate change, and we became one of the few companies to wholeheartedly make this profound decision, to be one of the first to go from black to green energy.”

Poulsen emphasized both the short-term and long-term nature of the change. “We looked at the 12 different lines of business we were in and went through them asset by asset, to see where we saw competitive strength. Coal, oil and gas were rapidly eroding as businesses, so we decided to divest eight of our twelve divisions and use the proceeds to reduce our debt.”

The had also started looking beyond its core, and had invested in offshore wind power, but the technology was still too expensive, producing energy that was more than double the price of onshore wind. Under Poulsen, the company embarked on a systematic “cost-out” program to reduce the expense of every aspect of building and running offshore wind farms while achieving scale in this emerging market.

Poulsen renamed the company Ørsted, after the legendary Danish scientist Hans Christian Ørsted, who discovered the principles of electromagnetism. This helped infuse a sense of purpose into the organization that drove it to cut the cost of offshore wind power by 60% while building three major new ocean-based wind farms in the UK and acquiring a leading company in the USA to pioneer North American offshore waters.

Previously 80% owned by the Danish government, Orsted’s IPO in 2016 was one the year’s largest. Net Profits have surged more than $3 billion since 2013, and Orsted is now the world’s largest offshore wind company, with a 30% share of a booming global market.

In more detail, here is the Innosight analysis: 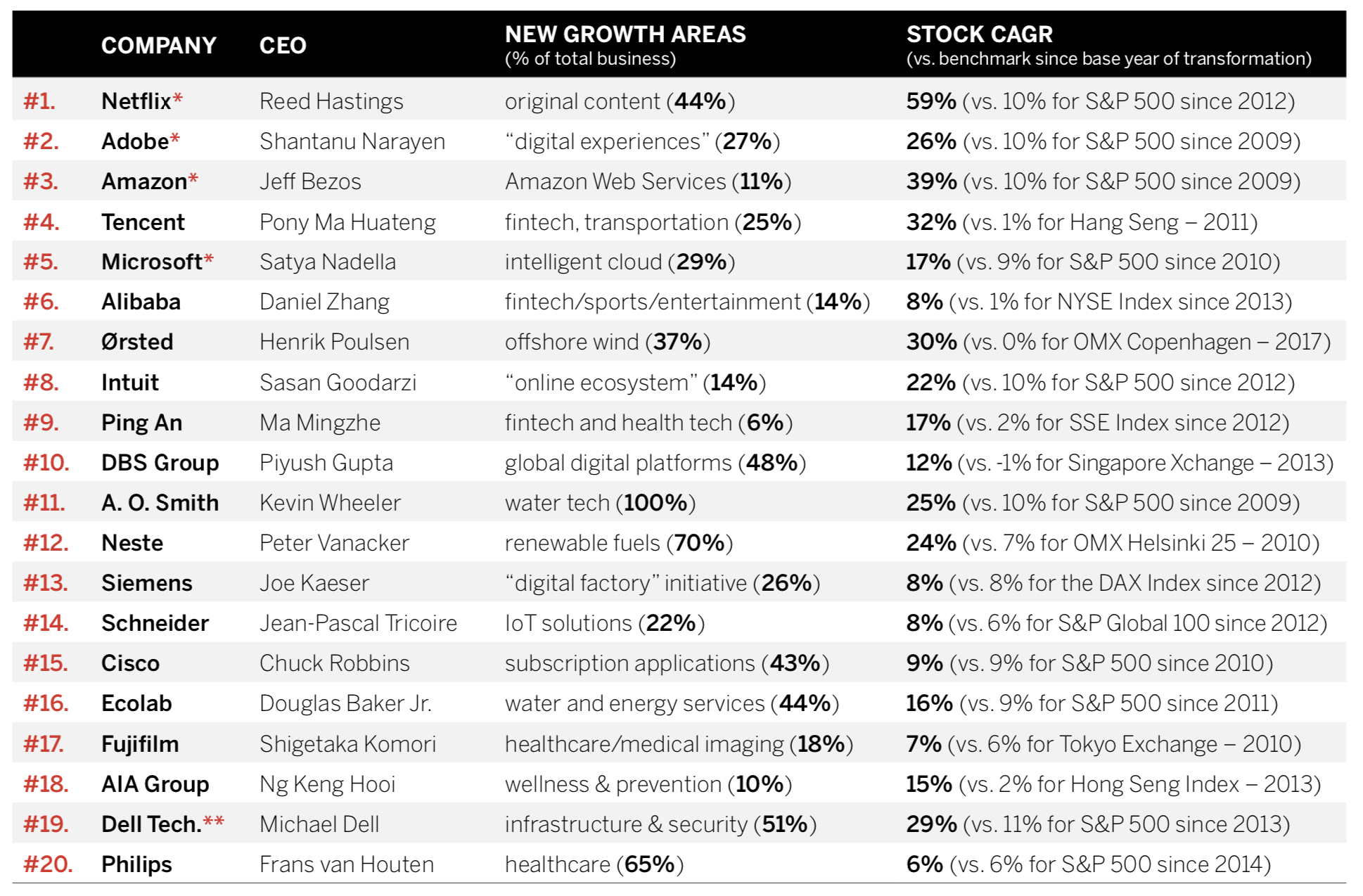 Transforming large organisations, with a legacy business, Innosight say leaders must identify one or more opportunity areas that are large enough to make a difference and significant enough to inspire a compelling story of change. Within the Transformation 20, there were four distinct themes that emerged – around digital transformation, combating climate change, transforming healthcare, and new fintech-enabled business models.

Overwhelmingly, the biggest theme for growth, especially in core markets, is diving deeply into digital waters by harnessing new business models for the cloud, the Internet of Things, artificial intelligence and other technologies. Among the 20 companies on the list, half of the firms are transforming by creating new kinds of digital experiences or services that are driving new value for customers.

When it comes to new growth areas, the mandate to combat global climate change or and deal with the ramifications of a warming planet has infused organizations with a transformative purpose. Four of the firms—Ørsted, Ecolab, Neste, and A.O. Smith—transformed by creating new growth through cleantech business models in renewable energy or water services.

The theme of healthcare transformation also proved to be a major global opportunity area—with Philips, AIA Group, Fujifilm  and Ping Anserving as prime cases. The shift from traditional sick care business models to preventative care and wellness has proven to be especially powerful for galvanizing organizations.

Finally, the theme of fintech, turning complex financial services into simple, disruptive technologies, proved to be a vital area of new growth, especially in China for firms such as Alibaba and Tencent Holdings, where a new generation of consumers aren’t wed to traditional banking or financial institutions.