Loonshots in London … Safi Bahcall tells me about the crazy ideas that win wars, cure diseases and transform industries 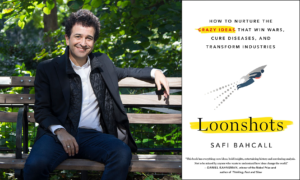 It was great to meet Safi Bahcall this week at the Thinkers50 Global Summit in London.

We sat next to each other by accident, but quickly discovered a shared early career in physics, and specifically in the area of superconductivity. Whilst I tinkered with barium based materials cooled down to almost absolute zero, to explore how their atomic structures behaved differently at such low temperatures, I suspect that Safi’s research was more profound. Indeed he grew up with both parents as astrophysicists. Whilst neither of us embraced superconductivity in our future careers, the curiosity to understand the world around us, to make sense of complexity, to hypothesise what will drive the future, has stuck with us.

Safi’s new book “Loonshots: How to Nurture the Crazy Ideas That Win Wars, Cure Diseases, and Transform Industries” is everywhere right now. Not least because Bill Gates recently recommended it as a must read. Talk about engaging the right influencers. It was also chosen by Malcolm Gladwell, Susan Cain, Dan Pink, and Adam Grant as one of the “most groundbreaking new non-fiction reads of the season”. Beyond all those endorsements, I too can confirm that it’s a great, inspiring read!

He seemed genuinely surprised, maybe a little embarrassed, by the success of his first book – and a little uncertain of his environment surrounded by the great business thinkers of our time. Names like Alex Osterwalder, Roger Martin, Rita McGrath meant very little to him, although he was quickly keen to learn and embrace their ideas. His reasonable excuse is that he’s spent most of his career in the real world, and had little time for the rather sheltered world of business academia.

After his physics PhD at Stanford, he worked for three years as a consultant for McKinsey, and then co-founded a Boston-based biotech company, Synta Pharmaceuticals, which specialised in new drugs to treat cancer and chronic inflammatory diseases. He led its IPO and became its CEO for 13 years. In 2008, he was named E&Y New England Biotechnology Entrepreneur of the Year. In 2011, he worked with the President Obama’s council of science advisors (PCAST) on the future of national research.

Quite a background, but an incredibly unassuming, friendly and thoughtful guy too.

So, as his book begins, what do James Bond and Lipitor have in common? What can we learn about human nature and world history from a glass of water?

“Loonshots” says the book blurb “reveals a surprising new way of thinking about the mysteries of group behavior that challenges everything we thought we knew about nurturing radical breakthroughs.”

Drawing on the science of phase transitions, it shows why teams, companies, or any group with a mission will suddenly change from embracing wild new ideas to rigidly rejecting them, just as flowing water will suddenly change into brittle ice. Mountains of print have been written about culture. Loonshots identifies the small shifts in structure that control this transition, the same way that temperature controls the change from water to ice.

Using examples that range from the spread of fires in forests to the hunt for terrorists online, and stories of thieves and geniuses and kings, he shows how this new kind of science helps us understand the behavior of companies and the fate of empires.

Over the past decade, researchers have been applying the tools and techniques of phase transitions to understand how birds flock, fish swim, brains work, people vote, criminals behave, ideas spread, diseases erupt, and ecosystems collapse. If twentieth-century science was shaped by the search for fundamental laws, like quantum mechanics and gravity, the twenty-first will be shaped by this new kind of science. Loonshots is the first to apply these tools to help all of us unlock our potential to create and nurture the crazy ideas that change the world.

In the above clip, an interview at Goldman Sachs, Safi tells a great story about the emergence of statins.

“35 million people in the United States take the statin drug. It’s probably one of the most important medical breakthroughs of the 20th century. It saved millions of lives, but when the scientist that invented it, Akira Endo, was starting on this project, he had some early trials of lowering cholesterol that all failed. Most of the industry said, “You can’t do this, and here’s why. Every cell in your body has cholesterol, so working on a drug that targets cholesterol is absurd. Everybody should stop what they’re doing.” Akira Endo persisted, convincing his superiors that he should go ahead and develop a drug. He got to the stage where he tested in animal models. The models you typically use are beta mice or rats. He tested it and saw nothing. It was good in the lab, but when he tested in the animals: zero. At that point, everybody gives up.

He persisted, and what happened is years later, people understood that the statin drugs only lower bad cholesterol called the LDL cholesterol. As it turns out, rats do not have LDL cholesterol. They only have HDL, the good cholesterol, so the drug had no effect on the rats. If you had been following the mantra of “fail fast and pivot,” you would have been off to the next thing. It’s important to persist through a number of these failures to really spend the time to investigate failure if you want to achieve it.”