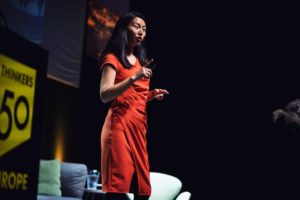 Irene Sun was born in China, raised in America, found herself in Africa, later worked with McKinsey, and is author of The Next Factory of the World: How Chinese Investment Is Reshaping Africa.

Her book highlights how China has become Africa’s largest trade partner, the largest infrastructure financier, and the fastest-growing source of foreign direct investment. Chinese entrepreneurs are flooding into the continent, investing in long-term assets such as factories and heavy equipment.

Irene tells a story about resilient Chinese entrepreneurs now building in Africa what they so recently learned to build in China – a global manufacturing powerhouse.

She joined me this week on stage in Odense Denmark at the Thinkers50 European Business Forum, to tell her story of growing up in China, moving to America, and then working in Africa where she gained her insights into a changing world.

Having tried life as a McKinsey consultant, she is now moving to Switzerland to work with the UN High Commission for Refugees. Somehow I get the feeling that her story is still beginning.

You can download her presentation from the European Business Forum here.

Here is an extract from Asian Book Reviews of a review of her book:

Africa is, as far as development is concerned, the next frontier. China is leading the charge in setting up factories and businesses across the continent. McKinsey’s Irene Yuan Sun writes in The Next Factory of the World that this will help Africa become a “global manufacturing powerhouse” as it follows China’s path to industrialization. However optimistic this may sound, Sun argues that not only did China do this itself during the 1990s and 2000s, but that it is already working in Africa.

Sun looks at Chinese businesses in four countries: Nigeria, Lesotho, Kenya, and Ethiopia. The result is a compelling, if not altogether convincing, book that focuses on the stories of several successful Chinese entrepreneurs rather than rely on overwhelming amounts of data and statistics. There are interesting accounts of Chinese textile giants in Nigeria, Africa’s most populous country, and gritty factory owners in Lesotho, a small mountainous country nestled inside South Africa.

This Chinese industrial presence has not been without complaint, ranging from labor abuses to corruption about which even Africans are shocked. “The Chinese? They taught us Nigerians something about corruption!,” exclaims a Nigerian businessman, whose country Sun points out is one of the most corrupt in the world. But the author takes a positive view, arguing that corrupt Chinese businessmen are amoral, not immoral, and that industrial accidents and abuses were common in the UK and US in the 19th century.

It is not only Chinese that dominate local manufacturing sectors: in Kenya, African-Indians dominate manufacturing while Lebanese do the same in some West African countries. The book also features a few successful African businessmen, such as Lesotho factory owners and an Ethiopian gel capsule maker. However, these local entrepreneur success stories seem to be rare: the Ethiopian capsule maker accounts for “almost all” of her country’s pharmaceutical exports.

Sun does a good job in detailing the problems of doing business in Africa, including bad governance, corruption and the sometimes adverse results of Western development plans. For example, Western focus on cheap medication to tackle diseases in Africa like malaria had the huge drawback of creating dependency on foreign medicine and preventing local pharmaceutical industries from developing. Often what works in the West cannot in Africa because conditions are vastly different. As such, sometimes good outcomes in Africa don’t depend on consistently good systems, because of things like bootstrapping development—when institutions and actors adapt to changes in conditions rapidly. This is one advantage Chinese firms and businessmen may have in Africa as they are more willing to bear with setbacks and chaos.

Today Irene joined me at the Thinkers50 European Business Forum to tell her story:

Whilst many Westerners can be casual about things such as riding a car, in my childhood and for children in Namibia, it is a special thing.

The interesting question is: How come that when cars are now common in China, why are they still a rarity in Namibia? The answer is that while Namibia has grown a lot, China has grown even more.

If  half of the 750 million people who has been lifted out of poverty in China, would be so in Africa, that would eliminate extreme poverty.

Factories matter, and while China is still the factory of the world, Africa has actually de-creased their industrialization.

Although there are downsides to them, factories lead to dramatic improvements in life quality.

Today there are finally signs that factories are coming to Africa. Chinese leaders are opening many of these. Chinese factories in Africa is important for European business leaders, because of five things:

“I have learned so much from people who are so different from me”.

Having grown up in China, studied in America, taught in Africa, worked for McKinsey, she is now heading to Switzerland, to join the UN High Commission for Refugees.

Somehow I feel her story is still just beginning.