New Power Generation … The rise of “soft power” and what does it take to be loved in a world of economic and political power plays?

Joseph Nye coined the term “soft power” in his 1990 book Bound to Lead that challenged the then conventional view of the decline of American power. After looking at American military and economic power resources, he felt that something was still missing, the ability to affect others by attraction and persuasion rather than just coercion and payment.

Hard power is typically easier to measure – size and population, military assets, GDP and economic growth.  Soft power is based on less tangible factors – culture and media, sports and entertainment, participation and influence.

Power in today’s world is much more about what you do, than what you say.

People form perceptions based on what they experience of you, and be the influence of others. Trust is less about believing words, particularly in a world of fake news and alternative facts, but about what you actually experience. Psychologists will remind us that people engage more in emotional than logical ways. Relationships are built on intuitive rather than logical attributes. “Hard” concepts of hierarchy, transactions and wealth give way to “soft” concepts like network, empathy and values.

If we look at the world’s most successful brands, they don’t simply focus on meeting needs, but on building liking and desire. Coca Cola is all about happiness. Microsoft is all about enabling you to achieve more. They seek to engage consumers in a bigger idea than their corporation or product, but about people and their emotional aspirations. They don’t seek to push their sales message, but to pull people towards them. Soft not hard.

Many countries are waking up to the importance of soft power for success in the 21st century. They invest enormous sums to increase their international reach and influence. Russia, China and other countries are spending billions on international broadcasting and cultural institutions.

In today’s information age, they recognise that leading the global conversation and having deep cultural and educational connections around the world matters more than ever to their security, prosperity and influence – that ‘winning the story’ is as important as success in more traditional hard power theatres.

Soft power rarely receives the attention afforded to hard power. That is understandable – there is no soft power equivalent to NATO, the G20, or the world’s stock markets. It is by its nature abstract and intangible, its impact subtle and apparent only over the long term. However there are many examples of how to assert influence in softer ways.

As we stand back to consider our changing world, the megatrends that are blowing across the globe – politically, economically and socially.

The economic advance of China and India is fuelling the rise of a new global middle class, which by 2020 will grow to 3.2 billion people (from 1.8 billion in 2009), and by the end of the decade will reach 5.3 billion. Rapid urbanisation is redefining our world, the nature of markets and power of nations. PwC calculates that 1.5 million more people live in cities every week. By 2025, Asia will be home to 33 of the world’s 49 megacities. In fact China expects to have 200 cities with a population of over one million people by 2025.

The global population is on course to top 8 billion by 2030, mostly in the developing world. Developed countries must adapt to aging populations, and their consequent implications for healthcare costs. Changing work patterns might help: PwC estimates that the OECD could gain more than $3.5 trillion by raising the employment rates of older people to levels found in New Zealand and Iceland (where 56% of those over 65 still work). Technology will fuse with humanity in new ways. Connective technology means that by 2020 there will be 7 times as many connected devices on the planet as people, according to Cisco.

Environmental threats are intensifying, questioning the durability of existing business models, with the public and private sectors facing ever greater pressure to act. A new age of increased accountability will challenge the balance of short-term priorities with long-term sustainability. Individuals and businesses are adopting more resource-efficient behaviours, from eco-friendly transportat to bike-sharing and electric vehicles to water conservation and material recycling.

The implications are for a huge shift in the nature, and growth in the importance of soft power:

Many of the “soft power” research reports over recent years have focused on many of the non-financial, non-political aspects of a nation. And also on the ways in which a nation seeks to engage with others – citizens, visitors, investors, and other nations. It’s not through propaganda or economics, but through culture and experiences.

France tops the 2019 Soft Power 30 ranking (see below), not because of its economic or political or military strength, but much more through its culture – 45 UNESCO World Heritage sites, Top 3 FIFA ranking for its soccer team, 632 Michelin starred restaurants, member of 94 international organisations, and 86 million annual tourists. Other factors can include a nations academic prowess, sporting success, luxury brands, entertainment, architecture, diplomacy, and more. 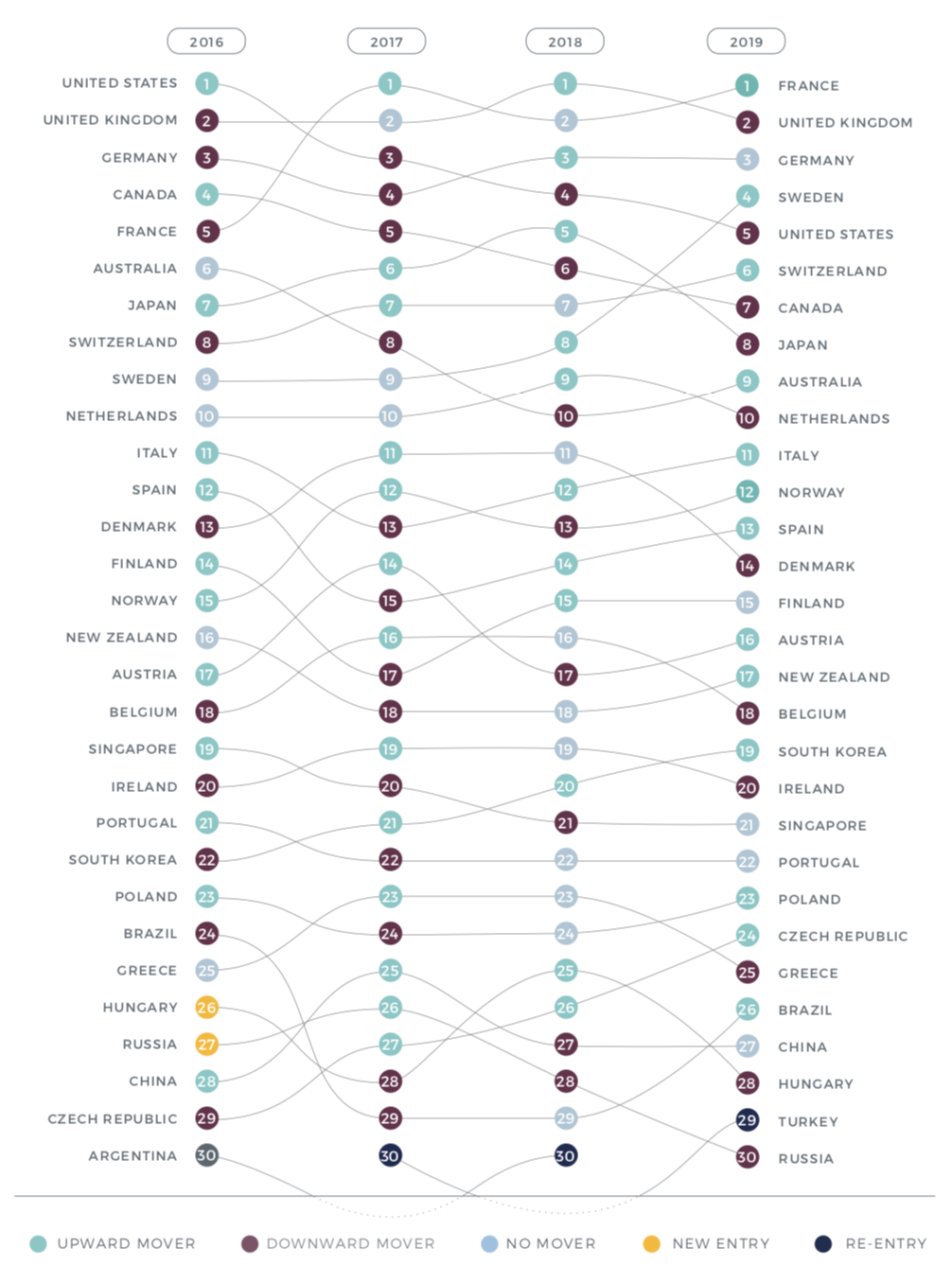 Whilst western nations dominate the ranking, there is a recognition in developing markets of the importance of soft power. China for example us now a huge contributor to international organisations, with one of the highest number of peacekeepers, for example. Equally, China is now the largest investor in Hollywood, influencing the stories and locations of blockbuster movies. Just like James Bond did for British perceptions, China can increasingly influence “goodies and baddies”. 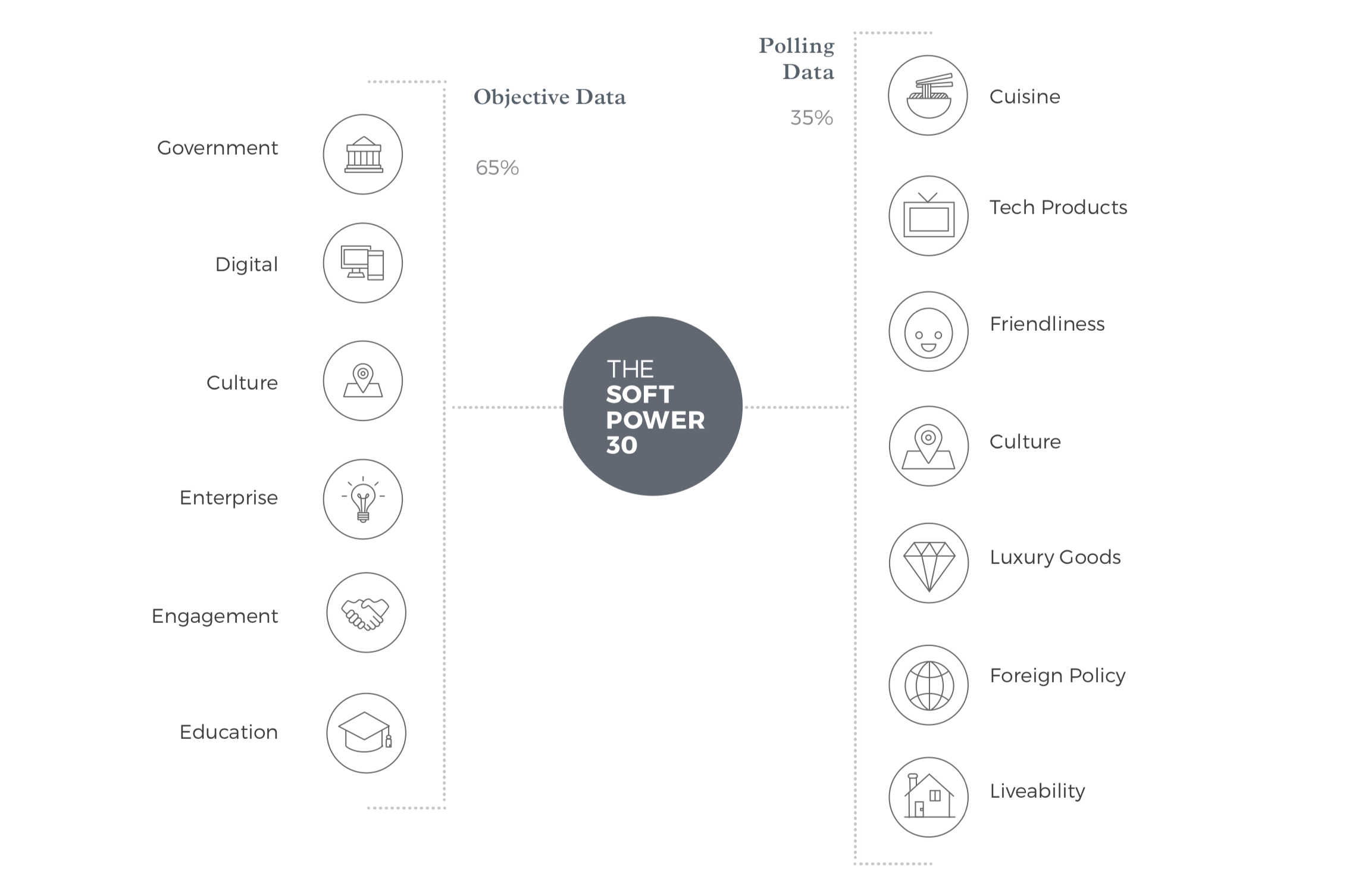 Similarly the Global Power City Index (GPCI) evaluates the major cities of the world according to their “magnetism,” or their comprehensive power to attract people, capital, and enterprises from around the world. It uses 6 factors—Economy, Research and Development, Cultural Interaction, Livability, Environment, and Accessibility.

I recently worked with Irene Sun, a young Chinese author who studied in America and then went to work in Africa. She wrote a book called The Next Factory of the World which focused on the future rise of Africa as a global manufacturing power, largely enabled by Chinese investment. In Kenya, China is everywhere. And with Mandarin schools and massive infrastructure projects, China is trying to grow its “soft power” throughout Africa. But can China convince Africans to love it

Erin Meyer, INSEAD professor and author of The Culture Map, has a fabulous approach to understanding how different cultures work with each other – How American’s get on with Chinese, Russians with Germans, Canadians with Australians. Whilst we are all different, there are some defining characteristics of our different cultures which create a platform for how we engage with each other around the world, or not. Erin joined me recently at the Thinkers50 European Business Forum to explain more:

Another leading mind on soft power, which we at Thinkers50 ranked as a thought leader, is Richard Florida. He is one of the world’s leading experts on economic competitiveness, demographic trends and cultural and technological innovation shows how developing the full human and creative capabilities of each individual, combined with institutional supports such as commercial innovation and new industry, will put us back on the path to economic and social prosperity.

And a few more interesting perspectives: