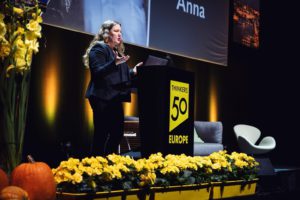 Anna Rosling first met her father in law when staying over at her boyfriend’s house at the age of 16. Next morning, Ole, her boyfriend now husband’s father, was founded counting shoes and measuring sizes in the hallway, trying to work out who the extra guest was.

Hans Rosling became a sensation of our time. His TED Talk videos transfixed audiences worldwide with his fast and simple statistical analysis of our changing world. His message was that “the world is better than you think”, and that we constantly underestimate how much progress has been made.

Together they wrote the book ‘Factfulness: 10 reasons we’re wrong about the world – and why things are better than you think‘ .

Two years after Hans passed away, daughter in law Anna is continuing the family message. She joined me on stage today, at the Thinkers50 European Business Forum 2019, with an updated view of the world.

She had some news that might surprise you – although life on earth is far from perfect, it is improving at a faster rate than we think. Statistics and facts show that, in many areas, today’s world is performing much better than it gets credit for.

Factfulness plays a little game with their readers, submitting to them 13 questions with multiple-choice answers on issues such as health, literacy, demographics and poverty. The rate of correct answers, even in the case of highly educated people, is staggeringly low, with responses almost always erring on the negativist side.

Anna does not target wilful distortions of the truth so much as the tendency to base opinions on half-truths, negativist assumptions and sheer ignorance. This tendency leads people to give in to a number of what the authors call ‘instincts’, which go against good and sound judgment. She distinguishes 10 of them that distort our perceptions:

Bill Gates described the book as “one of the most educational books I’ve ever read”. It could be of particular interest to those who have read the works of Steven Pinker, or Nicholas Taleb’s ‘The Black Swan’.

Finally here is a reminder of Hans Rosling, one of the most watched Youtube videos of all time:

Anna Rosling joined me at the Thinkers50 European Business Forum 2019. With thanks to Jane Thoning Callesen for transcript.