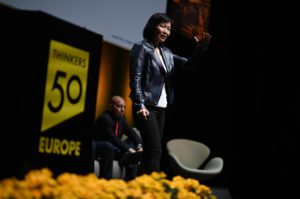 Haiyan Wang and Anil Gupta are a power couple of business thinking who have come into their own in recent years, with the rise of Asian businesses and the focus of learning on the blitzscaling growth of so many companies, including the likes of Squirrel Learning and Bytedance in China, and Jio and Oyo in India.

I was delighted that they could join me on stage in Odense, Denmark for this year’s Thinkers50 European Business Forum. They gave one of the best session’s of the two insight-intense days exploring Asian business, and how European businesses could learn from their fast-growth peers.

Haiyan is a lecturer at INSEAD and Managing Partner of the China India Institute, which she runs with her husband Anil Gupta. She is based in Washington, DC, and works as an expert on Chinese business.

Here are some of the best quotes from Haiyan’s keynote:

Waves of Chinese entrepreneurs have evolved from Haier and Huawei – to Tencent, JD.com and Alibaba – to CJI and BYD – to the massive explosion of entrepreneurs in the past 10 years, capitalizing on new technologies such as artificial intelligence. China is not longer the land of the dragon but has become the land of the unicorns.

Squirrel Learning: An example of a young unicorn, capitalizing on the need for adaptive personalized learning. Smart partnerships with universities have led to its success – by enhancing technology and brand value for parents.

The DNA of successful unicorns include a global vision, a global mindset, and a user-centric product positioning.

Bytedance: By understanding the young, TikTok has gone from 20 to 70 million active users in just a few years.

Simple company values such as “be open and courageous” og “aim for the highest” work well.

Being fast and agile is key. As for Mark Zuckerberg, he probably noticed WeChat a little too late.

In summary “We should all think a bit more like Bezos, who says: “This is still day one. We need to experiment like a mad man.”

Anil Gupta has been named by The Economist as one of the world’s “superstars” for research on emerging economies. By 2025, China and India will be two of the world’s four largest economies. By then, economic ties between them should also rank among the 10 most important bilateral ties worldwide. Anil Gupta focuses on this in his writings and his work at The China India Institute.

Here are some of the best quotes from Anil’s keynote:

I see several waves of entrepreneurs.

There are three main indicators of India’s transformation from 2014-2018:

Data consumption has gone up 100 times

The monthly data price has gone down by 98 percent

The government has played a key role in the transformation by supporting biometrics, pushing public banks to create open banks, and by de-monetizing the cash notes, which slowed down the economy but galvanized the digitization.

Partnerships are an important key to success.

Strategy is about exploration AND exploitation. They are tied together, just like imagination without execution is a Fool’s Paradise.

He focused on three Indian companies to learn from:

2. Paytm: ensuring a grand volume of mobile payment options with Alibaba amongst their investors.

I quizzed Anil about how can we learn from these examples:

Jio and Paytm are domestic, but OYO is global. They consider foreign countries as a new home market, by including local managers in their team. So the mindset is the limiting factor for many Europeans.

Western leaders need to think a bit more like Jeff Bezos, who bought the Washington Post, which was dying, being eaten up by digital media. He said: Don’t think if the internet as a challenge, think of digitization as a gift. It’s about embracing the new era and exploiting it, instead of being scared by it.

Broadly speaking, India has a lovely relationship with China. There have been wars, and China is a supporter of Pakistan, which is India’s enemy, so there are downsides, but India look at China as their role model, not the USA. For a country that invented yoga, India didn’t really start to stretch before they discovered China.