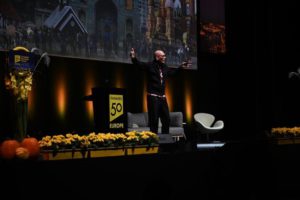 Kjell Nordstrom is the Swedish academic “funkster” who gave the world the book “Funky Business” 20 years ago. To celebrate 2 decades of funkiness, he joined me back on stage in Odense today to kick off this year’s Thinkers50 European Business Forum.

Here are some of the quotes from his session:

“It’s not only music that goes funky. Politics does too. And so does business in the sense that it doesn’t always follow established principles. Of all the things that are happening now, we never know what will be important in the future.”

“And although the US is important for all of us, you can’t bottle what’s happening in the US and transform it to a European context.”

“We should ask ourselves: Why are the five tiny countries close to the polar circle so successful? It’s not the oil, the windmills, or the weather. Here are the two reasons:

Some examples of our modernity:

“So a high trust and ultra-modern society will produce ideas that will later come to London, Berlin and other places on earth. That’s how we’ve created products and multibillion-dollar businesses in the Nordic.

“High trust and modernity in Scandinavia produced ideas, products and services that conquered their respective industries.”

“Our strong Nordic states with super dynamic and well-functioning companies was an interesting perspective for China, when they first opened their doors to the west.”

“The five Nordic countries continue to be extreme in the sense that we are very individualistic, don’t do family (64 % of households in Stockholm are single) – but do have high birth rates, practicing what my friend calls sequential monogamy.”

“The situation on Planet Earth remind me of the film The Matrix, because we are 7 billion people, and there are three forces at work that will set the agenda”

“China have a vision of a China that is 19 super mega cities, with 90 % of the Chinese population. The idea behind is that the more people you meet, the more you’ll innovate, invent.”

“Whenever we talk about making money, it boils down to monopolies. If you have a monopoly, you make money. I hate IKEA, but I will go there on Saturday – because we need beds for the children, and they have a monopoly. iPhone users shake like alcoholics if you tell them, you’ll get an Android instead.”

“In the matrix of cities, capitalism, and digitalisation, we will see a new ball game”

Kjell Nordstrom, author of Funky Business, joined me at the Thinkers50 European Business Forum 2019. With thanks to Jane Thoning Callesen for transcript.