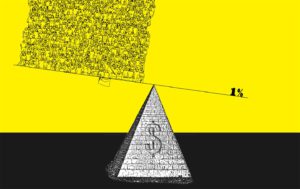 The median wage earner is poorer today than they were in 2007. This is mass impoverishment.

Mark Thomas, a friend and co-author, has just written a fantastic new book, and launched an entire movement no less, to address the inequalities of our rapidly changing world:

“The 99% Organisation exists to help end mass impoverishment. The 99% Organisation is an inclusive grass-roots movement, inspired by the Occupy movement, of people who want to end mass impoverishment using peaceful means. Its members come from all parts of society; they are people like you who are determined to help. If you are young, gifted and black, we want you. If you are male, pale and stale, we want you.

Whether you are a beggar, a barber, a banker or a billionaire, we want you.  The 99% Organisation aims to make mass impoverishment a key issue for Government, and to drive serious policy change. We want to build a world in which by 2050, everyone is at least 50% better-off than today.”

Mark is an economist by nature, so it is no surprise that he has meticulously analysed this situation, and strategically thought through what we need to do about it:

He argues that if you are part of the 99% – and there is a 99% chance that you are – then you are one of the first generation in living memory who can expect to be poorer than your parents, even as the economy continues to grow.

And you could be quite a lot poorer. If we continue as we are going, the civilisation we enjoy today will not last until 2050. Buying their own house is a distant dream for most young people; their wages are failing to keep pace with inflation; and more and more people are having to rely on food banks. Our age is one of chronic anxiety.

If the economy is doing so well, how can most people not be doing well? If the pie is growing, why aren’t we all getting bigger slices?

Mark’s new book “99%” shows what we, the 99%, can do to end mass impoverishment and build a society worth living in: an age of abundance, in which everyone benefits.

Hugh Pym, BBC Health Editor and former BBC Chief Economics Correspondent says of Mark’s book “If you are concerned about your future but would never dream of reading a book about the economy … you should read this one!” Sten Scheibye, former chairman of Novo Nordisk adds “In the age of Trump, Putin, and Brexit, it is difficult to be an optimist. But 99% opens a route forward – it deserves to be read by all those in a position of influence.”

Definition: the process in which even as the economy continues to grow richer, many people find themselves getting poorer year after year.

1. Mass impoverishment means that we are looking at the first generation in living memory that expects to be poorer than its parents.

2. Many countries suffer from mass impoverishment: the US since 2000 and the UK since 2010.

“The costs of austerity have fallen disproportionately upon the poor, women, racial and ethnic minorities, children, single parents and people with disabilities. The changes to taxes and benefits since 2010 have been highly regressive, and the policies have taken the highest toll on those least able to bear it.

The government says everyone’s hard work has paid off, but according to the Equalities and Human Rights Commission, while the bottom 20 per cent of earners will have lost on average 10 per cent of their income by 2021/22 as a result of these changes, top earners have actually come out ahead.”

These statistics are powerful, but many people do not relate to numbers alone. Behind the figures for poverty and homelessness are thousands of individual stories. Linking the concepts and data above to these stories will bring them to life and help many people to understand what is happening to them, and why.

Many of the charities active in poverty relief have access to countless such human stories. And these stories are a very important part of the picture – nurses having to visit food banks, parents having to choose between heating the house and feeding the children, et cetera.

But there is an even more widespread problem. Even those who are not at the bottom of the income ladder are struggling. Even those with careers which in previous generations would have been expected to lead to a very comfortable – if not prosperous – life now feel that such expectations are out of reach. In the last week, just in conversation, I have come across:

A successful website designer who, at the age of 43, has found that house prices have always been 10% more than he could afford and who is now worrying about the prospects for his daughter. Aged 14, she is doing extremely well in school and wants to go to university and get a job in London. He is concerned about whether he should burden her with all that debt in a world where a university degree may well not lead to a decently paying job;

A recently-qualified accountant with one of the world’s largest accountancy firms who is thinking of leaving the profession in order to direct pod-casts. When asked why he would abandon his career in this way, he replied, “if I carry on, reasonably successfully, and get the promotions I expect, in three or four years’ time, I will be earning £80,000 a year, and I will be able to borrow £300,000. But I still wouldn’t be able to buy anything in London. I might as well have a life, even if I can’t have a house.”

Mass impoverishment really does affect the vast bulk of people.