Catching the Hallyu … This week I’m in South Korea, exploring a culture of innovation that spreads across the world 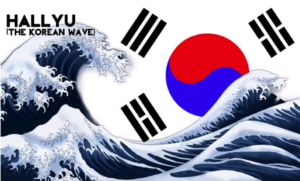 Hallyu originates as a Chinese word which, when translated means “Korean Wave”. Collectively it is used to refer to the phenomenal growth of Korean culture and popular culture encompassing everything from music, movies, drama to online games and Korean cuisine just to name a few. During former president Barack Obama’s state visit to Korea in March 2012, he made reference to the Korean Wave, which was made the country’s top priority by the government.

South Korea is one of the only countries in the world, if not the only one, that has a dedicated goal to become the world’s leading exporter of popular culture. It is a way for Korea to develop its “soft power”. Soft power is a popular term coined in 1990 by Harvard political scientist Joseph Nye. It refers to the intangible power a country wields through its image, rather than through hard force. Hard force refers to military power or economic power. An example of soft power in play is how the US enticed the world to buy its Levi’s jeans, Apple iPhones, Marlboro cigarettes, Coca-Cola soft drinks and Hollywood movies, by leveraging on a desirable image. A unique image of cool.

Hallyu first spread to China and Japan, later to Southeast Asia and several countries worldwide where it continues to have a strong impact. In 2000, a 50-year ban on the exchange of popular culture between Korea and Japan was partly lifted, which improved the surge of Korean popular culture among the Japanese.  South Korea’s broadcast authorities have been sending delegates to promote their TV programs and cultural content in several countries.

Hallyu has been a blessing for Korea, its businesses, culture and country image. Since early 1999, Hallyu has become one of the biggest cultural phenomena across Asia. The Hallyu effect has been tremendous, contributing to 0.2% of Korea’s GDP in 2004, amounting to approximately USD 1.87 billion. More recently in 2014, Hallyu had an estimated USD 11.6 billion boost on the Korean economy.

Over the last two decades, South Korea has become very rich and very futuristic. In 1965, Korea’s GDP per capita was less than that of Ghana. Today, South Korea is the world’s 12th largest economy.

Today Seoul is full of start-ups inspired by the Hallyu. The South Korean app Sidekick gives travellers immediate access to locals via text messaging. Samsung workers Scott Barrow and Jungwon Yang say that app works like a “concierge in your pocket”. The two created the app when they realised how much they depended on texting local colleagues for advice when travelling.

Sidekick links tourists with locals via text apps like Facebook Messenger, WhatsApp, WeChat and LINE. Locals provide advice in real-time on everything from the nearest bakery to questions about local customs. Sidekick access costs €18 a day and is available in one, three or five day packages. The service is currently available in South Korea, with plans to expand to Japan and elsewhere. The local guides provide advice in English, Korean and Japanese.

Technology is a huge part of Korean lives. Not surprisingly Korean companies plays very important role in its  revolution. Here are some of them:

1- Samsung Electronics: We all know that Samsung is internationally famous and one of the most preferred Korean Technology Company that has driven a new revolution to the electronic and technological market. In fact, in South Korea, Samsung Electronics is the largest and most popular company ever internationally preferred and listed to such level.

2- LG Electronics: The LG is now considered a strong competitor of Samsung because it is also playing great role in the technological revolution of this time. It is a multi-national company that has its approaches in multiple businesses all around the world.

4- Com2uS: When we talk about fun gaming then this company of South Korea comes in higher rankings. This company specialized in the development of unique games which are appreciated all around the world.

5- Daum Communications: This is one of the most famous Web Service Provider Company from Korea which allows you to get email, shopping and other services like Yahoo and Google.

6- Hyundai Group: And of course, who does not know Hyundai Group. This is one of the world famous Company and it has played really very great part in the technological revolution as well.

7- Korean Air: Korea is highly appreciated in technology and it is progressing with greater speed and Korean Air Airline is its significant example of it. It is a largest South Korean Airline company and its name have also been included in world’s top and best twenty airlines which clearly shows the preference that this company is gaining from all parts of the world.

8- SK Group: It is one of the biggest Korean Telecom Company which is famous all around the world and lots of SK Subsidiaries can also be found in the South Korea.

9- Korean Broadcasting System: As its name dictates, it relates to the media which allows you to get introduced to the K-pop artists and stars of South Korea. KBS is also considered the most widely and internationally famous TV network of Korea.

10- S-Oil: S-Oil is one of the highly competitive and famous Korean companies of Refine, Oil and Petroleum Industry.