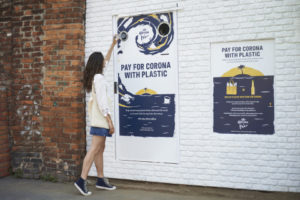 Corona launched a cause-driven campaign to celebrate the week of World Oceans Day (June 8 2019), according to a company press release.

As part of its new “Pay With Plastic” program, the beer maker is accepting plastic waste in exchange for beer at retailers and bars in Mexico, Brazil, Italy, Spain and Colombia.

The campaign is a joint effort between Corona and the environmental group Parley for the Oceans. Corona designed a limited-edition can made of upcycled materials, and for every six-pack sold, the organizations will clean up one square meter at a local beach. With the help of 25,000 volunteers, Corona and Parley have already cleaned more than 3 million square meters of beach. This summer, the goal is to pick up another 2 million square meters.

The beach cleaning aspect of the campaign is running through August in nine countries including Mexico, Canada, the U.K., Italy, Spain and Brazil.

Corona’s campaign taps into many consumers’ concerns about the environment and makes the beer maker the latest brand to embrace cause marketing. The summer effort gives Corona a chance to connect with consumers who are looking for ways to make changes that benefit the environment in their own lives while engaging with brands that share their values. Allowing beer drinkers to trade plastic waste for a new brew, or purchasing a beer that’s sold in recycled materials, lets Corona connect with consumers around an environmental cause and actively clean up beaches during their busiest season.

Purpose-driven marketing is on the rise among brands that want to appeal to consumers’ broader concerns and values. This is particularly appealing to Generation Z (those born after 1995), who studies have shown do not trust businesses to act in the best interests of society. Gen Z is twice as likely as other generations to care more about issues of equality and three times more likely to say that the purpose of business is to “serve communities and society,” according to brand consultancy BBMG and strategy firm GlobeScan.

Corona can engage with older Gen Zers — those who are old enough to buy beer — with a campaign that looks to change the perception around businesses’ mission and position itself as a values-driven and relatable brand. This type of cause-marketing effort could help Corona to build loyalty at an early stage in a beer drinker’s life.

Letting people pay for beer with plastic waste as currency follows Corona’s past efforts to clean trash from oceans and beaches. The beer brand made art out of old plastic collected on beaches and installed these pieces in cities around the globe to build awareness about the growing plastic problem in the ocean. Continued efforts will reinforce Corona’s environmental bona fides, which resonates with its beach-friendly brand identity as summer kicks off.