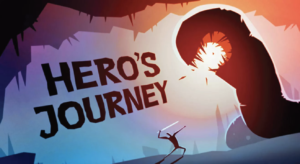 The Hero’s Journey is a classic storytelling structure which can be found in many legends, movies and even business narratives. The phrase was created by academic Joseph Campbell in 1949, and refers to a wide-ranging category of tales in which a character ventures out to get what they need, faces conflict, and ultimately triumphs over adversity.

3 stages of the hero’s journey:

In 2007, screenwriter Christopher Vogler refined Campbell’s original structure in his book, The Writer’s Journey. In it, Vogler expanded upon Campbell’s three phases, defining 12 stages that make it up.

The Hero’s Journey can be decoded in everything from The Lion King and horror novels to Star Wars and Arrival. But keep in mind that you don’t necessarily need to follow it beat by beat. You can instead think of it as a map: you can stray from the set path whenever you like. But when you’re struggling to figure out what should happen next, it can act as a narrative arc guide to suggest what the next milestone should be.

To show you how it can be used outside of your average sword-and-sorcery books, we’ve adopted the 1976 film Rocky as an example in each step. In which we meet our Hero.

The journey has yet to start. Before our Hero discovers a strange new world, we must first understand the status quo: their ordinary, mundane reality.

It’s up to this opening leg to set the stage, introducing the Hero to readers. Importantly, it lets readers identify with the Hero as a “normal” person in a “normal” setting, before the journey begins.

Example of the Ordinary World:
In the opening of Rocky, Rocky Balboa is introduced as a mediocre boxer and loan collector — just doing his best to live day-to-day in a poor part of Philadelphia.

In which an adventure starts.

The call to adventure is all about booting the Hero out of their comfort zone. In this stage, they are generally confronted with a problem or challenge they can’t ignore. This catalyst can take many forms, as Campbell points out in Hero with a Thousand Faces. The Hero can, for instance:

The stakes of the adventure and the Hero’s goals become clear. The only question: will he rise to the challenge?

Example of the Call to Adventure:
Apollo Creed, the undisputed World Heavyweight Champion, decides to make a big fight interesting by giving a no-name a chance to challenge him. Intrigued by the nickname, “The Italian Stallion,” he rings Rocky up.

3. Refusal of the Call

In which the Hero digs in their feet.

Great, so the Hero’s received their summons. Now they’re all set to be whisked off to defeat evil, right?

Not so fast. The Hero might first refuse the call to action. It’s risky and there are perils — like spiders, trolls, or perhaps a creepy uncle waiting back at Pride Rock. It’s enough to give anyone pause.

In Star Wars, for instance, Luke Skywalker initially refuses to join Obi-Wan on his mission to rescue the princess. It’s only when he discovers that his aunt and uncle have been killed by stormtroopers that he changes his mind.

Example of the Refusal of the Call:
Rocky says, “Thanks, but no thanks,” to Creed’s invitation. He’s reluctant, given that he has no trainer and is incredibly out of shape.

In which the Hero acquires a personal trainer.

The Hero’s decided to go on the adventure — but they’re not ready to spread their wings yet. They’re much too inexperienced at this point and we don’t want them to do a fabulous belly-flop off the cliff.

Enter the mentor: someone who helps the Hero, so that they doesn’t make a total fool of themselves (or get themselves killed). The mentor provides practical training, profound wisdom, a kick up the posterior, or something abstract like grit and self-confidence.

Wise old wizards seem to like being mentors. But mentors take many forms, from witches to hermits and suburban karate instructors. They might literally give weapons to prepare for the trials ahead, like Q in the James Bond series. Or perhaps the mentor is an object, such as a map. In all cases, they prepare the Hero for the next step.

Example of Meeting the Mentor:
In steps former boxer Mickey “Mighty Mick” Goldmill, who sees potential in Rocky and starts training him physically and mentally for the fight.

In which the Hero enters the other world in earnest.

Now the Hero is ready — and committed — to the journey. This marks the end of the Departure stage and is when the adventure really kicks into the next gear. As Vogler writes: “This is the moment that the balloon goes up, the ship sails, the romance begins, the wagon gets rolling.”

From this point on, there’s no turning back.

Like our Hero, you should think of this stage as a checkpoint for your story. Pause and re-assess your bearings before you continue into unfamiliar territory. Have you:

Example of Crossing the First Threshold:
Rocky fully accepts the gauntlet to square up when he crosses the threshold into his love interest Adrian’s house and asks her out on a date.

In which the Hero faces new challenges and gets a squad.

When we step into the Special World, we notice a definite shift. The Hero might be discombobulated by this unfamiliar reality and its new rules. This is generally one of the longest stages in the story, as our protagonist gets to grips with this new world.

This makes a prime hunting ground for the series of tests to pass! Luckily, there are many ways for the Hero to get into trouble:

This stage often expands the cast of characters. Once the protagonist is in the Special World, he will meet allies and enemies — or foes that turn out to be friends, and vice versa. He will learn a new set of rules from them. Saloons and seedy bars are popular places for these transactions, as Vogler points out (so long as the Hero survives them).

Example of Tests, Allies, Enemies:
Rocky continues to try and win over Adrian while making a dubious friend in Paulie.

7. Approach to the Inmost Cave

In which the Hero gets closer to his goal.

This isn’t a physical cave. Instead, the “inmost cave” refers to the most dangerous spot in the other realm — whether that’s the villain’s chambers, the lair of the fearsome dragon, or the Death Star. Almost always, it is where the ultimate goal of the quest is located.

Note that the protagonist hasn’t entered the Inmost Cave just yet. This stage is all about the approach to it. It covers all the prepwork that’s needed in order to defeat the villain.

Example of the Approach to the Inmost Cave:
The Inmost Cave in Rocky is Rocky’s own mind. He fears that he’ll never amount to anything — something that he reveals when he butts heads with his trainer, Mickey, in his apartment.

In which the Hero faces his biggest test of all thus far.

Of all the tests the Hero has faced, none have made them hit rock bottom — until now. Vogler describes this phase as a “black moment.” Campbell refers to it as the “belly of the whale.” Both indicate some grim news for the Hero.

The protagonist must now confront their greatest fear. If they survive it, they will emerge transformed. This is a critical moment in the story, as Vogler explains that it will “inform every decision that the Hero makes from this point forward.”

The Ordeal is sometimes not the climax of the story. There’s more to come. But you can think of it as the main event of the second act — the one in which the Hero actually earns the title of “Hero.”

Example of the Ordeal:
The start of the training montage marks the beginning of Rocky’s Ordeal. He pushes through it until he glimpses hope ahead while running up the museum steps.

In which the Hero sees light at the end of the tunnel.

Our Hero’s been through a lot. However, the fruits of their labor are now at hand — if they can just reach out and grab them! The “reward” is the object or knowledge the Hero has fought throughout the entire journey to hold.

Once the protagonist has it in their possession, it generally has greater ramifications for the story. Vogler offers a few examples of it in action:

Example of the Reward (Seizing the Sword):
Rocky’s reward is the return of his faith in himself. He regains the self-esteem to realize that he has the stuff to take on Apollo Creed — win or lose.

In which the light at the end of the tunnel might be a little further than the Hero thought.

The story’s not over just yet, as this phase marks the beginning of Act Three. Now that he’s seized the reward, the Hero tries to return to the Ordinary World, but more dangers (inconveniently) arise on the road back from the Inmost Cave.

More precisely, the Hero must deal with the consequences and aftermath of the previous act: the dragon, enraged by the Hero who’s just stolen a treasure from under his nose, starts the hunt. Or perhaps the opposing army gathers to pursue the Hero across a crowded battlefield. All further obstacles for the Hero, who must face them down before they can return home.

Example of the Road Back:
On New Year’s Day, the fight between Rocky and Creed is held. Rocky realizes the challenge that lies before him in the first few rounds, in which both men are more or less equally matched.

In which the last test is met.

Here is the true climax of the story. Everything that happened prior to this stage culminates in a crowning test for the Hero, as the Dark Side gets one last chance to triumph over the Hero.

Vogler refers to this as a “final exam” for the Hero — they must be “tested once more to see if they have really learned the lessons of the Ordeal.” It’s in this Final Battle that the protagonist goes through one more “resurrection.” As a result, this is where you’ll get most of your miraculous near-death escapes, à la James Bond’s dashing deliverances. If the Hero survives, they can start looking forward to a sweet ending.

Example of the Resurrection:
Rocky’s knocked down more than a few times as the fight continues. The entire fight winds up lasting 15 rounds and takes both men to the brink of exhaustion.

12. Return with the Elixir

In which our Hero has a triumphant homecoming.

Finally, the Hero gets to return home. However, they go back a different person than when they started out: they’ve grown and matured as a result of the journey they’ve taken.

But we’ve got to see them bring home the bacon, right? That’s why the protagonist must return with the “Elixir,” or the prize won during the journey, whether that’s an object or knowledge and insight gained.

Of course, it’s possible for a story to end on an Elixir-less note — but then the Hero would be doomed to repeat the entire adventure.

Example of the Return with the Elixir:
Rocky doesn’t win the fight — but he doesn’t care. He’s won back his confidence and beaten his mental demons. And he’s got Adrian, who tell him that she loves him.