Danish CEO Lars Thinggaard calls for a more responsible approach to technology and its impact on society. 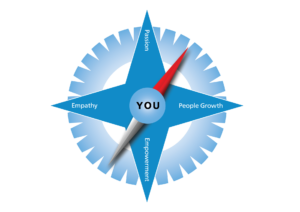 Lars Thinggaard is CEO of video technology company Milestone, based in Denmark, which was recently acquired by Canon. He is also a co-author of the Copenhagen Letter, which makes the case for a more ethical and sustainable technology sector, and one of the leaders of the growing Tech4Life movement in Denmark.

“I build my own compass,” he says and has championed authenticity in practice, be it in his leadership style or the impact of his technologies in society. His beer crate speeches are part of the company folklore (more about that later).

At Thinkers50 we recently described him as “the voice of conscience for the technology sector, offering a compelling Scandinavian alternative to Silicon Valley.”

Thinggaard is a leader who forges his own path. If he anticipates that the atmosphere during a management meeting might become a bit tense, he brings ‘scream pillows’. Then the participants can leave the meeting room and vent their emotions by screaming into the pillow. After that, the meeting can continue peacefully.

He has also built his own behavior compass, used to assess his managers, and give him an overview of the quality of management in the company. When it comes time for the managers to attend a leadership seminar, Lars has been known to engage artists who can train the team in how to visually express their strategic views.

He is one of the few leaders in the Danish business community who likes the limelight and engages in public debates.

“I could see that we were on our way to becoming a large organization, where complexity can make it difficult to realize new ideas. We decided to act as our own disruptors by establishing a new development center in Silicon Valley, because we wanted to be close to the newest trends and technology. The unit got its own budget, and dedicated resources that were not available to anyone else in the organisation” he says.

The centre now employs 20 staff members and just received a capital injection by Milestone’s owner since 2014, Canon, and is expected to employ more than 100 people within a few years. The next big innovative leap is cloud services within video technology.

“At the People’s Political Festival, I talked a lot about the countless European companies, like the Danish banks, that take these quick, week-long inspirational trips to Silicon Valley. But as they’re on the plane ride home, their everyday work is waiting to greet them Monday morning. They lose the train of thought and everything stalls. I didn’t want that to happen in our case, which is why we established an independent business unit in Silicon Valley. The best way we can bring something we want to happen to life is by creating a separate, focused unit. Safe, where the big corporation isn’t allowed to take the resources that are set aside for innovation. “

Thinggaard is very proactive, and when he wants to communicate his thoughts on leadership, he doesn’t hesitate to pick up the phone and call the other side of the world.

“When I wanted to explain what it meant to be your own disrupter, I thought about the American high jumper Dick Fosbury, who won the 1968 Olympics in Mexico and became world-famous for his ‘Fosbury Flop’ technique. Dick’s trainer was really against him back then. He thought it couldn’t be done. People had always jumped forward over the bar. So, I gave Dick a call to tell us about the way he works. He is an engineer and runs his own business, so it made sense to use him as a model of what it means to raise the bar,” said Lars.

He has also contacted former Danish prime minister Poul Schlüter, who served in several minority governments, to understand his view on how leaders can make difficult things happen.

“I interviewed him for four hours and left with two great pieces of advice: Always bring humour to the negotiation table and make sure that your counterpart leaves with something he can use. “

He has called many other people. When he hears something on the radio that captures his attention, he gives the person a call to find out more. “Many are naturally surprised when I call, but I think it’s an effective way to find out something new,” he said.

The next in line to get a call is Yuri van Geest, co-author of the book ‘Exponential Organizations’. The book has made a huge impression on Thinggaard and he’s planning to meet him.

Lars Thinggaard is also a big fan of Danish philosopher Søren Kierkegaard, whose quotes he likes to simplify to use as a mantra for his management style.

According to Lars, one of his greatest achievements is the development of Milestone Systems’ behavioral compass, which is used to assess the company’s management quality.:

“My starting point is a compass because I enjoy sailing. It’s all about choosing a course, and about the needle that points in a particular direction,” said Lars.

Lars Thinggaard uses the compass to measure managers’ abilities within business acumen, passion, empathy, developing others and empowerment, which is the ability to influence your own future through self-control.

“Once a year, I reward the best leader in Milestone. The reward is an old-fashioned crate full of good, Danish beer, because we practice ‘beer crate speeches’ (where a speaker stands on top of the crate, speaking in front of an audience) to train our leaders in speaking to and engaging their audiences.”

Several years ago, Lars Thinggaard bought Carlsberg’s stock of wooden beer crates, which can hold 50 bottles of beer each. The winner has to share the beer with his team and hold a speech while standing on top of the crate.

“When I first started this tradition, I didn’t anticipate that our winner would be in Australia. It cost me more than DKK 5,000 to ship the beers and the crate to Australia!” Lars laughed.

His recent ebook “Business Magnetism” tells the story of how a small company made friends with the world in a hurry. It is the story of Milestone Systems’ journey so far. Starting with a small Danish company which gathered a highly fragmented industry together into a business ecosystem, and redefining the perception of video technology.

Today, Milestone is a major player in this business worldwide. We did not do this alone, we used the power of partnerships. Business Magnetism is for “doers” committed to growing their businesses. It challenges conventional thinking, completely disregards models and provides a host of new perspectives.

Why magnetism? In physics, magnetism has changed our fundamental understanding of the universe.

Thinggaard wants to change your understanding of companies on the rise; how to attract partners and develop sustainable, long-term profitable growth. It is a powerful way to accelerate a growing company.

These ideas transformed Milestone from a technology concept into a global business. Under Thinggaard’s leadership, Milestone has grown to become one of the most valuable companies within the video management software industry.

His book takes a look behind the scenes into the mind of a CEO facing the opportunity of a lifetime. It gives us a first-hand view into the people behind Milestone, their experiences and dilemmas in building a global success.