From Amazon Dash to Aussie Farmers,  … through branded boutiques and online marketplaces, digital walls and mobile marketing, big data and personalised promotions … what is the future of retailing?

Online retail has grown rapidly over the last decade, from a marginal bolt-on, to major revenue stream in a multi-channel model. In the US, it has grown by around 18% per year, and now accounts for 8% of all sales. But digital is more that this, it is not just another way, but a fundamental capability that can enhance every channel. Search on your phone, buy online, pick up in store. Go to store, use your phone to buy, delivered to your home. Retail innovation is about hybrids, combing physical and digital activities and options in a more experiential and valuable way.

Retail purpose, formats and incentives all change – whilst loyalty cards originally drove behaviour through points, people soon became wise that the rewards were trivial compared to special offers in store. Whilst stores have enhanced their shopper experiences, markets have fragmented with more space for discounters. In Turkey for example, BIM has taken around 40% of the food market with low price, small outlets across cities. At the same time, online players have morphed into credible alternatives, where Amazon sells wines and eBay replaces physical outlet stores. More emotionally, technologies such as Synqera from Russia can “mind-read” a shoppers emotions, judging how to best engage them as they shop, and how to make them smile.

Big data, the huge quantitites of transacational data, mashed with other sources of personal and behavioural data through complex algorithms, means that marketing is highly personalised. Around 35% of all Amazon purchases and 75% of Netflix movie choices are based on recommendations. Of course these suggestions compete with the much more trusted recommmendations of friends and peers on social media, often valued around 10 times more highly than anything from a brand. A brand therefore needs to think laterally, about how to influence communities, and give them the abilities and incentives to influence each other. Consumers also become much less tolerant of failures, unavailable products or poor service, they expect free and easy returns, and they immediately tweet their feelings, particularly the negative ones, to thousands of people like them. 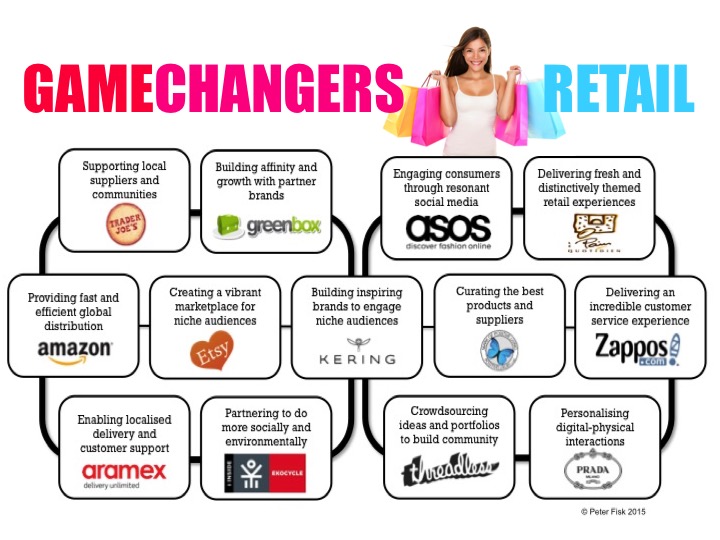 You can explore more of the retailers driving innovative experiences online and physically (and most often in an integrated way) at FutureStore and also innovators in other sectors who are embracing retail as part of their changing business models and consumer experiences at Gamechangers. Also, here are the top retailers as featured in the 2018 World’s Most Innovative Companies rankings by Fast Company magazine:

Amazon … from clicks to bricks

24 years old, and now worth $940 billion, Amazon was initially known for selling books through its website (and later digital versions via its Kindle e-reader), Amazon has built up a customer service, inventory, and shipping empire that allows the site to offer everything from clothes to lawn furniture to janitorial supplies. It also sells digital content like movies, music, and apps. Its Amazon Web Services arm is a multibillion-dollar provider of cloud-based services for millions of business customers around the world, including government agencies and universities. And it’s a major player in consumer electronics–not only by offering devices such as Fire tablets and TV boxes, but also via its Alexa AI assistant service, which made news at the CES 2017 gadget show by being built into everything from LG refrigerators to Ford cars. In an interesting twist, Amazon has made significant investments in brick and mortar, opening its first bookstore in Seattle in late 2015 and since then expanding to 13 locations. In 2017, the company completed its acquisition of Whole Foods and in early 2018 opened an Amazon Go grocery store to the public at the company’s headquarters in Seattle.

Premium cosmetics retailer Sephora was founded in France in 1969, acquired by luxury conglomerate LVMH in 1996, and has evolved into one of the world’s most powerful beauty chains. While women had been accustomed to sampling products at department store beauty counters with the help of brand representatives, Sephora allowed women to test products on their own along the aisles of the store. This alternative model of product discovery has been very popular and has allowed the brand to scale globally. Sephora has invested heavily in its website that contains educational videos that teach customers how to use different products. The brand also has a popular loyalty program and a monthly subscription box that allows women to discover new products at home. In 2017, Sephora started rolling out small format boutiques that offer a more intimate shopping experience in neighborhoods. These will exist alongside its larger format stores in malls.

Brandless launched in 2017 with a simple concept: An online retailer, selling its own line of nonperishable food and other household items, where every single product costs $3. Much like other direct to consumer startups such as Everlane and Warby Parker, Brandless wants to cut out the hidden middleman markups from many national brands found in grocery stores. Brandless also abides by its own set of values when manufacturing products. All food products are non-GMO and preservative free, for instance, while all beauty products are devoid of more than 400 harmful ingredients like parabens, phthalates, and sulfates. Founded by serial entrepreneurs Tina Sharkey and Ido Leffler, Brandless has so far garnered $50 million in funding and is set to grow quickly, providing consumers an alternative to Amazon.

Everlane launched in 2010 with a concept that was, until then, unheard of in the fashion industry. It would offer the customer a full breakdown of how much it cost to make each product, from the price of the raw materials and transportation to exactly how much of a markup Everlane would take. Millennial shoppers were very attracted to Everlane’s vision of radical transparency, and the brand has grown exponentially over the years. Founder and CEO Michael Preysman has taken the concept of transparency beyond price to offering customers a glimpse into the company’s supply chain, which is both ethical and environmentally sound. On the brand’s website, customers can get a glimpse into the factories where products are made and see photos of the workers making the garments. In 2017, five years after saying he would rather shut down Everlane than open a physical store, Preysman launched the brand’s first permanent brick and mortar location in New York. The brand will continue to roll out new locations around the country over the next few years, each equipped with a proprietary new point of sale system that will make the transition from shopping online to in-store more seamless for the customer.

Sugarfina’s founders, couple Rosie O’Neill and Josh Resnick, have built a multimillion-dollar business on selling artisanal, high quality candies–often infused with alcohol like vodka and champagne–presented in clear, Instagrammable boxes, perfect for gifting. Founded in 2012, the store now has more than two dozen stores across the U.S. with more opening soon, with the infusion of $35 million in growth financing it received in late 2017. These stores, much like the candy boxes, are minimalistic and encourage customers to sample and savor the products, much like they would wine. The brand now frequently collaborates with artists like Gray Malin and brands like MeUndies to create “Candy Bento Boxes” with sweets and products.

Founded in 2014, New York-based personal-concierge service company Alfred combines artificial intelligence with human assistants to create experiences that go beyond just picking up laundry or ordering groceries (though Alfred does that too). The Alfred platform works in conjunction with an app to provide customers with next-level services such as putting groceries away in the refrigerator and auto-ordering and restocking toilet paper. Alfred assistants also learn about customers’ usage habits, using that info to better inform the AI work. Meanwhile, Alfred has partnered with brands such as Diageo, Nestlé, and P&G to allow Alfred’s customers to test new products (and have the brands receive helpful feedback on beta goods). Available at various price points, Alfred is now focused on incorporating itself into more and more apartment buildings. In 2017, it signed a deal with major real estate company Related Companies, which added Alfred services to an additional 11,000 units while helping Related’s luxury buildings retain tenants.

“FutureStore” is part of the Gamechangers project, exploring the future of retail, the fast-changing needs of consumers and the best new ideas from retailers across the world. You can explore FutureStore online with in-depth case studies, downloadable tools and videos, but also through keynotes, workshops and practical fast consulting support for your business. To think of new possibilities. To learn from the best ideas around the world, and even from other sectors. And by applying new approaches from design thinking to gamechanger strategies, new business models to lean innovation, consider how you can innovate and grow.

Here is an example of Peter Fisk’s retail keynote, which is always updated and customised to the audience and event: