If there is one concept that has dominated leadership thinking in recent times, then it is probably the “Growth Mindset” as articulated by Stanford psychologist, Carol Dweck, building on her research on mindsets and their effects on achievement and success.

Over the last year, as I have been working closely with Microsoft, for example, I’ve realised that the Growth Mindset is probably the most important idea that has helped Satya Nadella to define a new culture, a new freedom, and a new vision for his organisation. And to triple its market capitalisation over the initial five years of his leadership, regaining the mantle of world’s most valuable company.

Mindsets of course are soft and conceptual. Dweck has been particularly successful at making this more meaningful through her “what it is/isn’t” diagram, and applying her ideas primarily to children’s education, and then secondly to the minds of business leaders.

The hardest part is to turn a concept of the mind, into a practice of reality … part of the everyday working of an organisation, understanding the implications for processes, behaviours, decision making and performance metrics. and then implementing them not as a fashion, but as a meaningful approach that challenges and changes, enhances and extends, the direction of the business.

Other similar concepts have added, or sometimes confused, the picture.

Neuroscience advances offer a rigour to understanding our brains and behaviours, whilst mindfulness has added a more cult-like aura, converged the yoga studio with the workspace. Its value can be huge, being more aware of yourself and your surroundings,  and “seizing the nowness” as opposed to the tendency of many corporate workers to otherwise drift in an isolated, internal vacuum.

“The view you adopt for yourself profoundly affects the way you lead your life. It can determine whether you become the person you want to be and whether you accomplish the things you value.”  says Dweck. 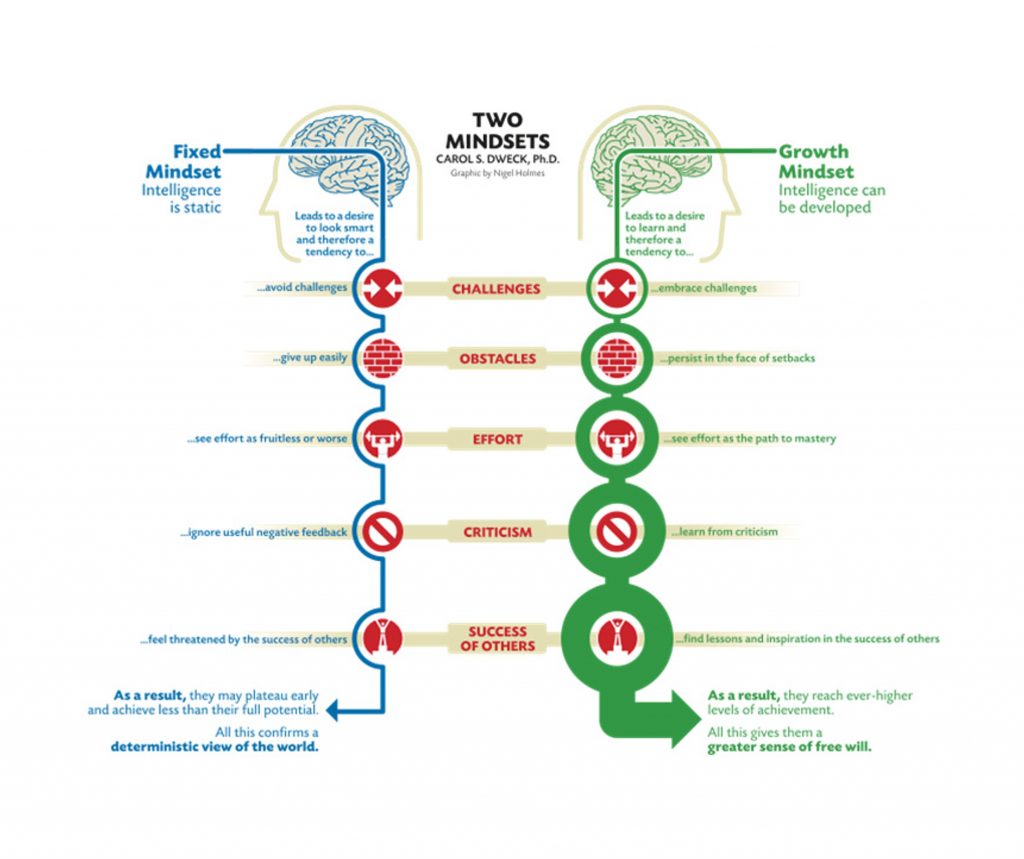 Dweck further analyzes these mindsets and their effects on various domains such as sports, business, relationships, ability, and parenting. She concludes that the growth mindset leads to higher achievement whereas the fixed mindset often leads to early plateaus and lower levels of success.

Through Dweck’s research, the fixed mindset hampers success and must be avoided in domains where one seeks to find achievement. If we believe that our abilities such as creativity and intelligence cannot be changed, any successes become confirmations of our ingrained skill set and an affirmation of our worthiness. This leads us to avoid failure at all costs in fear of exposing our true selves.

Let’s use a fixed mindset to interpret intelligence. In this system of thought, we believe our intelligence is static, leading us to want to appear intrinsically smart. This can result in: avoiding challenges, giving up easily when faced with obstacles, not giving 100% effort, ignoring criticism, and feeling threatened by the success of others.

If we see life through a fixed mindset:

Believing that our qualities can be cultivated leads to different fundamental thoughts and actions. This mindset changes the implication of failure from unworthy to opportunity. Failure becomes a minor setback and a chance to learn. This growth-oriented worldview places deep meaning in effort, learning, and reaching one’s potential.

Using a growth mindset, let’s approach intelligence again. Unlike the fixed mindset, we believe intelligence can be developed, leading us to want to learn. A desire for learning often results in: embracing challenges, working through obstacles, valuing effort, learning from criticism, and finding inspiration in the success of others.

If we have a growth mindset:

Of course, this is an abstract concept that needs thoughtful implementation, to shape the attitudes and behaviours, choices and metrics, that will deliver it in reality. Here are some useful links:

Going beyond fixed and growth mindsets

Whilst the opposing descriptions of these two mindsets is helpful in bringing some clarity to what they are, the mind is not quite so binary. James Anderson calls the reality, more of a “Mindset Continuum.”

When we see mindsets as a dichotomy, we misjudge the subtlety and complexity of Dweck’s work. We may also misunderstand what we must do to change our Mindsets. Students can’t instantly “have” a Growth Mindset. We can’t expect our teaching strategies to suddenly result in students taking on challenges, embracing effort and learning from their mistakes.

Rather, our goal is to help students become increasingly growth oriented. It is more realistic and helpful to expect that as students become more growth oriented, they will persist a bit longer. They will take on a bit more of a challenge, put in a little more effort, and respond more positively to mistakes. Their progress towards a Growth Mindset is gradual.

Furthermore, if we view Mindsets as a dichotomy, we run the significant risk of adopting a one-size-fits-all approach. Students at different stages along the continuum have different worldviews – therefore, they require different teaching strategies. A student with a Fixed Mindset will respond and act differently to a student with a Low Growth Mindset, so we must adapt our teaching methods accordingly.

In other words, a Growth Mindset is not a declaration, it’s a journey – one that involves small, progressive shifts in thinking, rather than huge leaps. Most people aren’t Fixed or Growth, but somewhere in between. 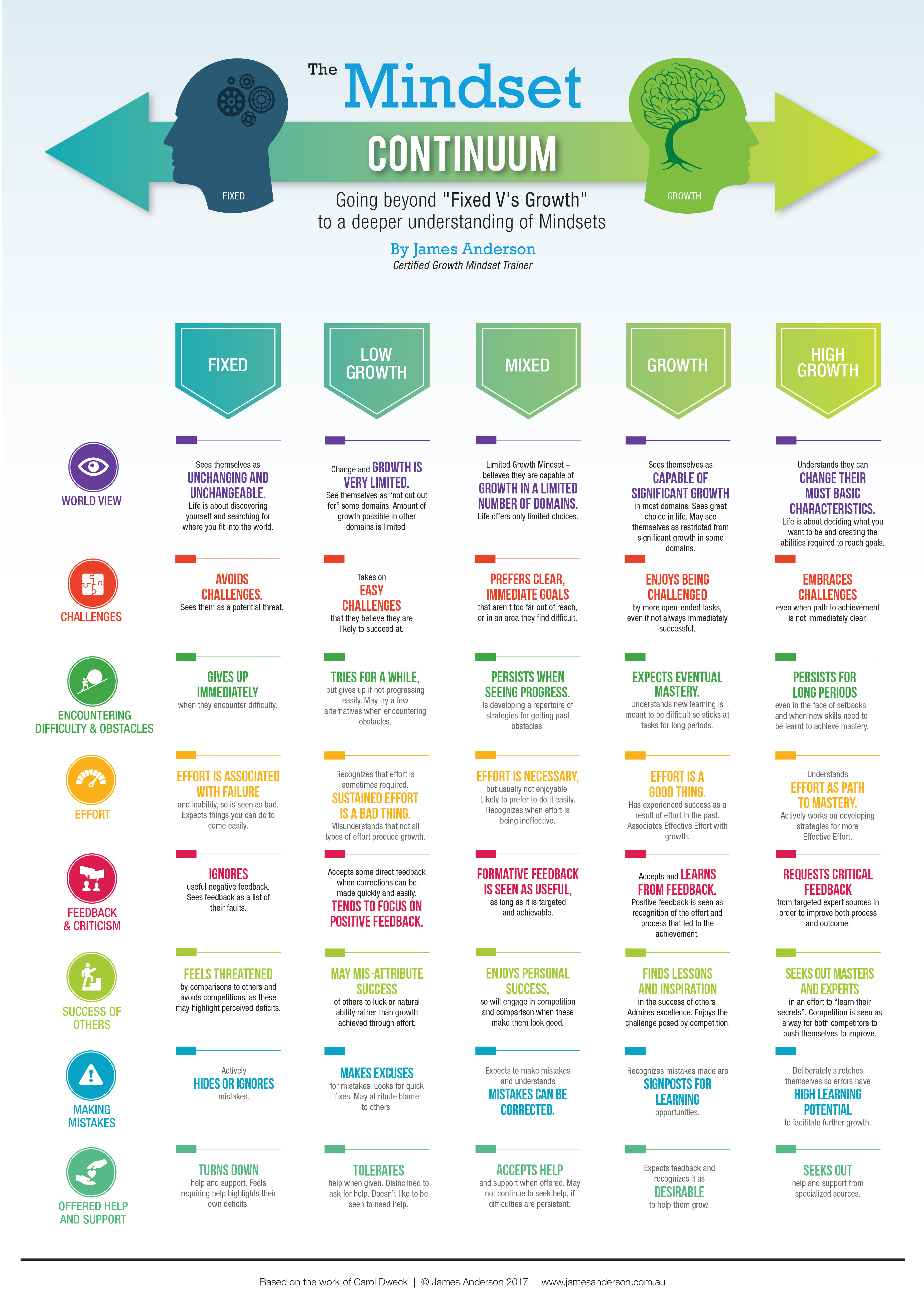 The right mindset for business leaders

What matters most, in a business context, is understanding how does all this translate to the mindset of a business leader, and ultimately to everyone within an organisation culture. What are the implications for leadership development, for the role and behaviours of leaders in organisation, and the ability of organisations to focus, develop and succeed in today’s world of market complexity and relentless change.

In my forthcoming book “Extraordinary: How to step up to lead the future of business” I take on this challenge, defining the new mindset for business leaders.

It builds on all of the above, but also with some added insight from the rapidly evolving field of business applied neuroscience. In particular it looks at what it takes for a business leaders to make sense of their complex environment to compete today, but even more importantly, to succeed tomorrow.

Too much leadership thinking has focused on “today” … the ability to deliver operationally, to engage employees and customers in the present, the organisational status quo. Yet in today’s business environment, the dynamics of constant change – driving both challenge and opportunity – is the major dynamic which leaders need to manage.

In particular they become more focused on where they are going, rather than where they are. That requires sense making, to find the best opportunities for future growth, and to dispense with incrementalism, and instead make more dramatic, disruptive choices.  This drives a much greater focus on future, rather than just growth – revolutionary beyond evolutionary.

Time to embrace a “future mindset” … Unlock your Einstein dreams and Picasso passion … Embrace your Mandela courage and Ghandi spirit. Be more curious, be more intuitive, be more human. Ask more questions. Don’t be afraid to have audacious ideas, to challenge the old models of success, and turn future ambitions into practical profitable reality.