Megatrends 2030 with the UAE Government

Download a summary: Megatrends 2020-2030   The world is constantly changing, and many of these shifts have the potential to alter the investment landscape. While some of these changes can be temporary and fleeting, others can be powerful, transformative forces that shape how society is organized at a fundamental level.

“Megatrends” are powerful, transformative forces that can change the trajectory of the global economy by shifting the priorities of societies, driving innovation and redefining business models. They have a meaningful impact not just on how we live and how prioritise, but also on government policies and corporate strategies.

1. Making sense of our changing world

– Trends: from weak signals to dramatic disrupters, in every region, every sector
– Shifts: from old world to new world, crossing the chasms, harnessing the trends
– Impacts: from economic to social, risks and rewards, defining why does it matter

2. Harnessing the trends for innovation and growth

– Future Back: creating tomorrow beyond today, managing portfolios and projects
– Outside in: insight with ideas, aspirations and expectations, business and society
– Fast Forwards: turning ideas into practical action, through enlightened innovation

– Cause: having a purpose beyond profit, to go further and faster to the future
– Collaboration: from ecosystems to communities, achieving much more together
– Courage: leaders who dare to shape the future, a better future, in their own vision 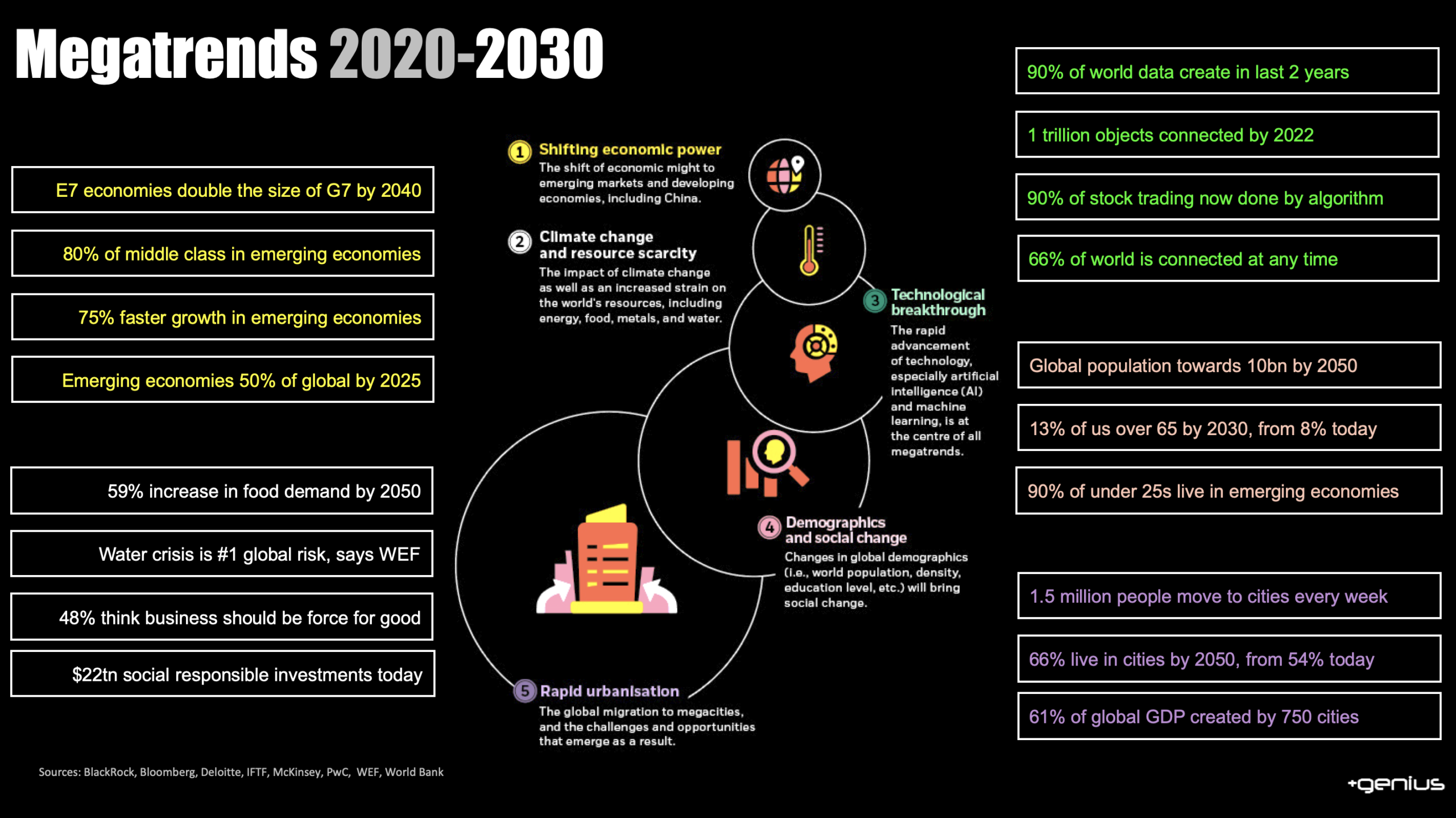 There are five megatrends shaping our future, shifting the way we live and work.

Let’s consider each of them:

10 years ago, you’d never imagine we’d be watching our favourite television programmes during our commute and enjoying shopping sprees in our living rooms. Or that we could order our dinner without speaking to anybody, and hail taxis to drive us from the middle of nowhere to the middle of anywhere.

Consider the advent of electric vehicles, e-commerce, solar panels, robotics, cloud computing, streaming, smart grids and many other modern-day innovations. In each case, engineers and entrepreneurs are aiming to capitalize on the need for either a new solution or a better alternative in existing markets.

Breakthrough innovations have become more powerful in recent years thanks to globalisation and the ubiquity of technology. Together, they have lowered entry barriers for new competitors and accelerated the adoption of new technologies around the world, thereby unleashing a wave of disruptive opportunities across industries and economies. As such, technological growth has become exponential.

Changes in global demographics will bring significant challenges and opportunities for societies and businesses. The forces that underpin this megatrend include ageing populations in advanced economies and China, the outlook for future jobs, immigration pressure, skills imbalance and the radically different priorities of younger generations.

Italy and Germany lead the way in Europe, with the median age of their populations at 47.9 and 46.6 years (only behind Japan at 48.2).  In Western Europe, 1 in 5 people are older than 65 and this is expected to rise to 1 in 4 in the next decade.  These trends are likely to slowly, but steadily change the outlook for household spending (towards older consumers), inflation rates, economic growth and government policy (the US already spends over 18% of GDP on healthcare). Ageing and the resulting decline in the labour force will hence require dramatic social and technological changes.

Consider the case of Japan; the combination of ageing (about one-third of its population is over 65yr ) and low immigration has led to very tight labour markets; the jobs-to-applicant ratio in Japan stands at 1.63x, the highest level in 17 years.  A counter to this has been more Japanese women entering the workforce; between 2000-17, female workforce participation rose from <60% to 69.4%. At the same time, Japan has been one of the largest buyers (and makers) of robotics; it employs 308 robots for every 10,000 human workers compared to 200 for the US.

Smarter machines are a solution for countries with shrinking labour forces; but they are likely to trigger challenges for younger economies, by disrupting jobs and limiting wage growth. Automation and greater use of tech will require tomorrow’s workforce to develop new and more advanced skills; take the case of the UK, where less than 20% of the population had a university degree in 1990, but in 2000 that rose to 33% and reached 42% in 2017. As the competition for highly skilled labour heats up, companies will need to spend more resources to attract, train and retain talent.

Cities have always been hubs for talent, capital and innovation. In the last decade, hundreds of large cities have been built in emerging economies, attracting significant infrastructure investments. Large cities such as San Francisco, London, Paris and New York have also been the ideal launch pads for entrepreneurs given their large, dense populations. Understanding the advantages and challenges of future cities can help us identify the next sources of growth.

With more people in the world living in cities than ever before, cities’ share of global growth is rising. According to McKinsey as of October 2018, the top 50 cities account for 8% of global population, 21% of world GDP, 37% of urban high-income households and are home to 45% of firms with more than $1 billion (all amounts given in USD) in annual revenues.1

As cities grow large, they require significant infrastructure, including communication networks (e.g. 5G, fibre), transit and transportation (e.g. metro, bridges), social infrastructure (e.g. hospitals, schools) and housing. This was a key driver of commodity demand and fixed investments in the last 10-15 years as China and other developing economies industrialised rapidly and millions of people migrated to cities. This story is likely to continue as other emerging markets follow China’s lead (as discussed in the previous section).

Climate change and resource scarcity … carbon, and the pressure on our planet for food, oil, and water

An expanding population and the rising demand for food, energy and materials continue to strain the finite resources of the planet. The need for solutions that improve energy efficiency, lower food waste and provide alternatives to scarce resources has never been greater. Underlying these trends is the persistent increase in global emissions which has led to intensifying debates around climate change and how we can resolve it.

In 2018, global emissions continued their march higher growing 1.7% yoy (year on year). In turn, the US National Climate Assessment report noted that sea levels are now rising twice as fast as 25 years ago, while re-insurance company Swiss Re estimated recently that natural catastrophes and extreme weather events caused $146 billion (all amounts given in USD) in damages in 2018. The social and economic consequences of climate change are substantial. How can this be slowed?

Investing in energy efficiency and renewable energy is an important step. The good news is that clean energy today is cheaper than it has ever been. The average price of a solar module has fallen 88% since 2010, while the cost of wind turbines has declined by over 40%. In some countries, clean energy sources are comparable to natural gas and coal power in terms of unit costs and rely less on government subsidies each year.

In the last twenty years, developing economies have been lifted by the rising tide of globalisation and manufacturing shifting to Asia. The emergence of a sizeable, aspirational middle class, particularly in China, has made it an important destination for global companies. We continue to expect emerging markets to offer significant growth potential for domestic and multinational firms.

Two decades of unprecedented growth has lifted China’s per capita GDP from a meagre 8% of US per capita GDP in 2000 to roughly 30% this year.1 This rapid growth has been enabled by significant infrastructure investments, support for an export-focused manufacturing base and increased spending on innovation. In turn this has resulted in persistent growth in household incomes; the World Bank notes that China alone is set to add one billion people to the global middle class between 2005-2030. It is not surprising then that China has been a key source of growth for companies exposed to Chinese consumers (e.g. luxury brands, autos, smartphones).

China’s significant economic progress has coincided with its foray abroad. Consider the approximate $1 trillion (all amounts given in USD) Belt and Road Initiative as China seeks to invigorate infrastructure and trade routes across south Asia and other parts of the emerging world. A new breed of Chinese companies are increasingly capturing market share at home and venturing overseas. This is a natural progression of an economy that has been steadily moving up the value curve in infrastructure, manufacturing and technology sectors.

Elsewhere, genuine reform can unlock potential in India, which benefits from an expanding labour pool (the working age population is set to grow by almost 14% by 2030E, compared to a -3% decline for China). As cost inflation in China pushes manufacturing jobs elsewhere, neighbouring southeast Asian economies are benefiting (e.g. Vietnam, Bangladesh). Another advantage for emerging markets is the ability to lead from advanced economies and adopt cheaper and better technologies to boost productivity (e.g. clean energy, communication). For instance, Mexico’s mobile penetration is at 90% while fixed-line penetration has plateaued at 16%.

Future State 2030 is a report by KPMG which identifies nine global megatrends that are most salient to the future of governments. While they are highly interrelated, the megatrends can broadly be grouped into trends reflecting changes in the status and expectations of individuals, changes in the global economy and changes in the physical environment.

Higher life expectancy and falling birth rates are increasing the proportion of elderly people across the world, challenging the solvency of social welfare systems, including pensions and healthcare. Some regions are also facing the challenge of integrating large youth populations into saturated labor markets.

Rise of the individual

Advances in global education, health and technology have helped empower individuals like never before, leading to increased demands for transparency and participation in government and public decision- making. These changes will continue, and are ushering in a new era in human history in which, by 2022, more people will be middle class than poor.

Information and communications technology (ICT) has transformed society over the last 30 years. A new wave of technological advances is now creating novel opportunities, while testing governments’ ability to harness their benefits and provide prudent oversight.

The interconnected global economy will see a continued increase in the levels of international trade and capital flows, but unless international conventions can be strengthened, progress and optimum economic benefits may not be realized.

Public debt is expected to operate as a significant constraint on fiscal and policy options through to 2030 and beyond. Governments’ ability to bring debt under control and find new ways of delivering public services will affect their capacity to respond to major social, economic and environmental challenges.

Emerging economies are lifting millions out of poverty while also exerting more influence in the global economy. With a rebalancing of global power, both international institutions and national governments will need a greater focus on maintaining their transparency and inclusiveness.

Rising greenhouse gas emissions are causing climate change and driving a complex mix of unpredictable changes to the environment while further taxing the resilience of natural and built systems. Achieving the right combination of adaptation and mitigation policies will be difficult for most governments.

The combined pressures of population growth, economic growth and climate change will place increased stress on essential natural resources (including water, food, arable land and energy). These issues will place sustainable resource management at the center of government agendas.

Almost two-thirds of the world’s population will reside in cities by 2030. Urbanization is creating significant opportunities for social and economic development and more sustainable living, but is also exerting pressure on infrastructure and resources, particularly energy.